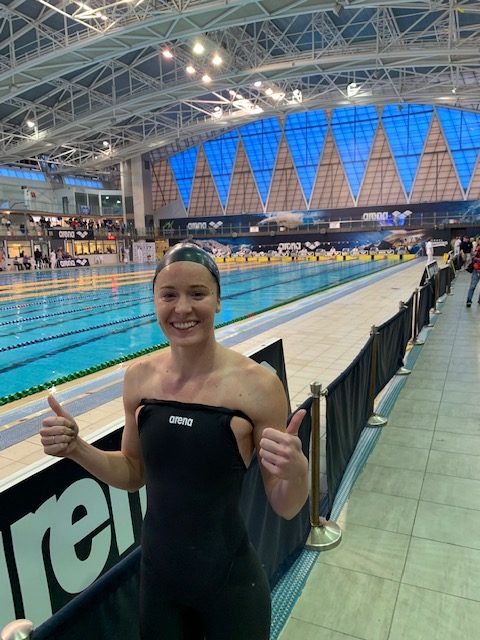 Kendyl Stewart broke her dry spell in the 100 fly last summer with her first best time in 4 years. That might have opened the flood gates on her improvement curve.

While the Israeli swimmers came up short again of the World Championship qualifying standards on Thursday at the 2019 Israel Cup, the highlight of the day was from a non-Israeli: American Kendyl Stewart. She swam a 57.51 in finals of the 100 fly, which is the 3rd-ranked time in the world this season and a lifetime best for her.

Among the big swims from the domestic athletes was a 2:13.03 in the 200 backstroke from Aviv Barzelay, which won the race by over 3 seconds (Kathleen Baker was again absent from the event, just like in the 200 IM on Wednesday). That’s not only the National Age Record for both 17 and 18-year olds, broken by half-a-second, but is also the new overall National Record. It undercuts the old record of 2:13.10 set in 2016 by Keren Siebner.

The time was still short of the numbers set by the Israeli federation to earn an expenses-paid trip to the Sette Colli meet in June with an eye on a FINA “A” qualifying time, though.

Hers was one of 2 national age record breaking swims on the 2nd day of competition in Netanya. The other came from another teenage phenom: 15-year old Anastasia Gorbenko. Already the holder of 3 senior National Records, she added another age group record to her tally on Thursday. She swam a 26.01 in prelims, which is faster than any 17 & under in her country’s history has been in long course. Her previous best time was a 26.59, and she scratched the final.

In her absence, the winner of that final was Zonar Shikler won in 26.24.

we’ve been seeing a lot of swimmers really get back to their peak, and then pass it again…the perseverance award will be pretty tough to decide this year and next