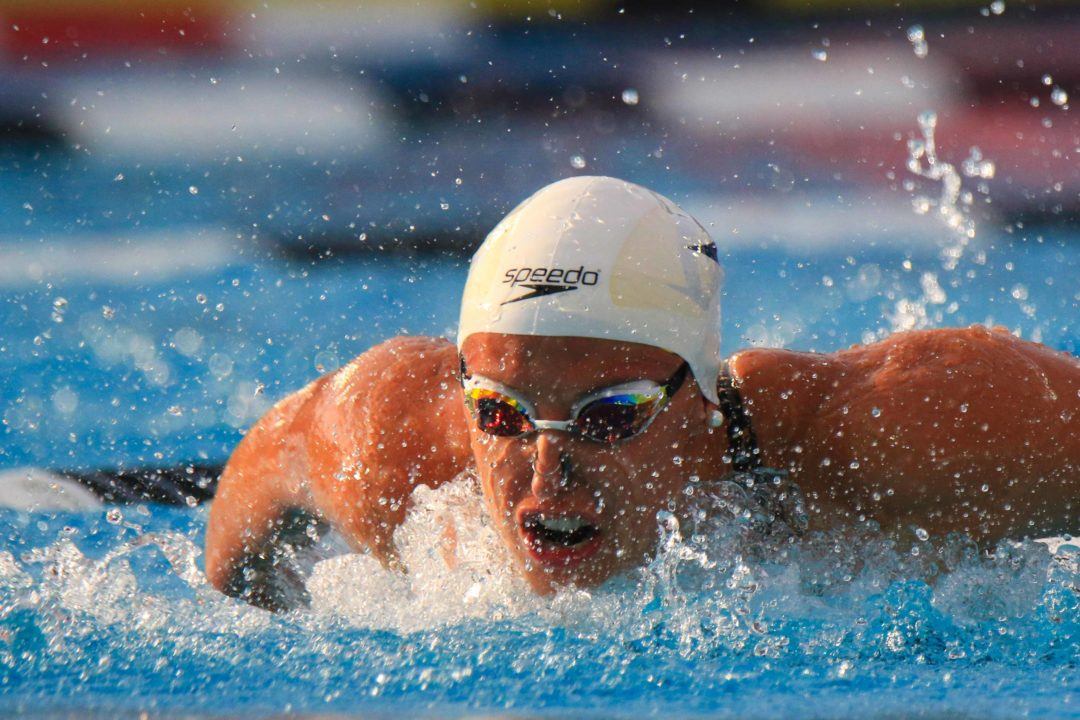 The World Record holder in the 100 back, Kathleen Baker will show down in the 200 IM against the country's most recent National Record breaker: 15-year old Anastasia Gorbenko. Archive photo via Jack Spitser/Spitser Photography

Israel swimming will host its primary qualifying event for the 2019 World Championships this weekend at the Wingate Institute in Netanya. Besides the domestic swimmers, a group of visitors from David Marsh’s pro group Team Elite based out of San Diego will race; Marsh works with several Israeli swimmers and in a consulting capacity with the Israeli federation.

Also competing will be Yakov Toumarkin, who holds 6 Israeli records, and 18-year old sprinter Tomer Frankel, who was the 2018 European European Junior Champion in the 100 free and holds National Records in the 200 free and 100 fly in long course.

The “1% slower than A” standard will qualify athletes to participate in a training camp and in the Sette Colli competition in Rome in mid-June. There, they will need to hit a FINA “A” standard (2nd column) to qualify; or they can do thee same at the official trials competition which will be held from June 28th-29th back at Wingate.

Swimmers can also qualify by hitting the time in the 3rd column, the “1% faster than A standard,” at any meet ‘throughout the year,’ specifically from July 24th, 2018 through June 15th, 2019. They will be required to ratify that swim by hitting the “1% slower than A” standard for Olympic events or the FINA “A” standard for non-Olympic events at one of the trials meets.

There is an exception for college swimmers competing abroad to submit other FINA recognized competitions for hitting the “A” standard, though they must choose one target ‘trials’ meet.

Swimmers who do not qualify to be a part of the extended team travelling to Sette Colli may, at their own expense, travel to a meet abroad in an attempt to hit the FINA “A” time. If they do, they will be entitled to expense reimbursement.

There are other nuances and wrinkles, especially for relay selection, but this is broadly the selection criteria.

A small but powerful group from Team Elite will be in attendance at the meet. That includes American backstroker Kathleen Baker, who is the World Record holder over 100 meters in long course. She’s entered in the 200 IM and 200 back in the meet.

Joining her will be German swimmer Marius Kusch, her significant other who just completed his final NCAA Division II Championship meet (where he was the dominant force). He’s entered in the 50 and 100 meter butterflies, where he’ll face the aforementioned Frankle, among others.

The 3rd part of the travelling group is butterflier Kendyl Stewart, who is also entered in the 50 and 100 meter butterflies. She finished 3rd in the 100 fly at last summer’s US National Championships.

All 3 US-based swimmers, each entered in 2 events, will hold strictly top seeds in their races.

Where are Pebley and Irie?

Irie is in Japan for it’s WC trial meet that just started.

Too bad it wasn’t Phelps/Schmitt

Durden and McKeever working to keep the Cal guys in appropriate stroke/distance match ups, putting time in on the class of 2045 already.

Think the Grevers, Grant-Vollmers and Stubblefields also deserve a shout in the list.