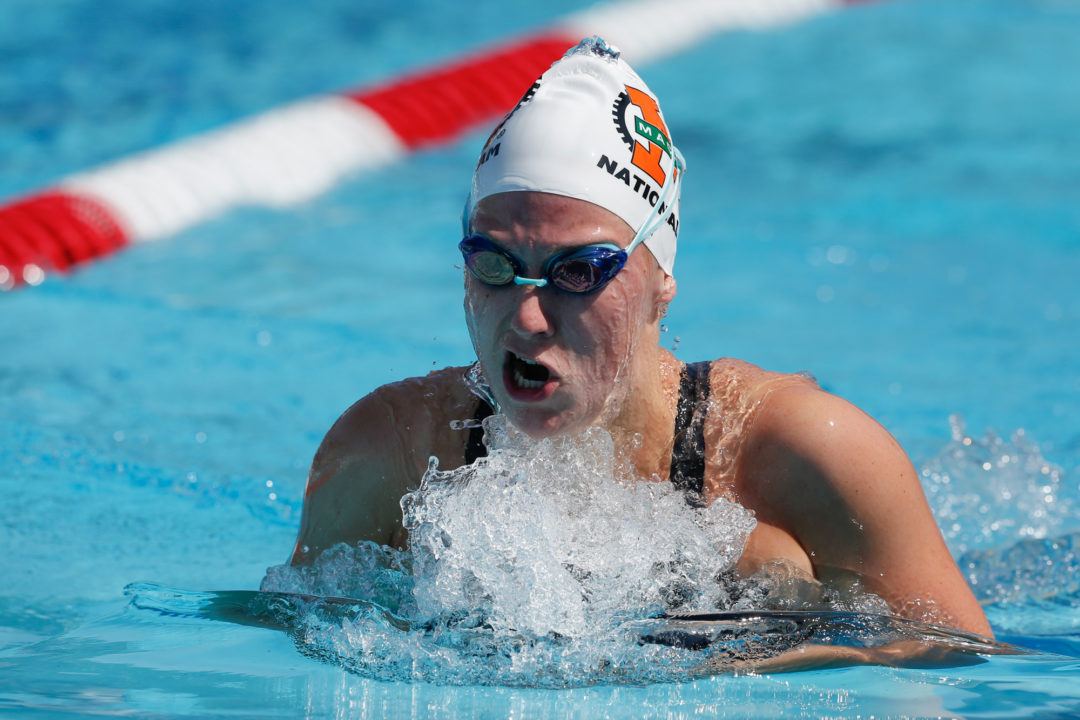 A few of the top names entered in both Junior and Senior Nationals have scratched the former on day 1 prelims, suggesting they may not be competing this week. Archive photo via Tim Binning/TheSwimPictures.com

A few of the top names entered in both Junior and Senior Nationals have scratched the former on day 1 prelims: Anna Keating, Noah Brune, Noah Henderson and Jason Louser, among others.

Each of those four had a top-5 seed on day 1 prelims. Keating and Brune were both third seeds. Keating will drop the 100 breast – that comes after the Machine Aquatics 16-year-old placed 25th at senior nationals in that race last week. Brune cuts out of the 200 fly, where he finished 60th at senior nationals, as well as the 1500 free, where he was 18th among the seniors.

Zephy Koh was another senior national swimmer who scratched her 200 fly today.

All scratches from circle-seeded heats:

Is Louser part of the Jr Worlds team for 4IM? Maybe that’s why he scratched?

He is. But the team doesn’t leave until August 15, and at least a few other team members are competing this week at various meets. Could be a valid reason he’s scratching, but being on World Juniors doesn’t necessitate a scratch.

Know a few kids who are swimming at CA for two weeks, in addition to their respective state senior champs, which means they had been prepping for the meets all summer long. Kind of a recipe for burnout.

I don’t blame any of them for pulling out of this meet, I can’t imagine staying in Palo Alto for 2 weeks for both Seniors and Juniors! The hotel rates (on average) are over $300/night, and that’s the “discounted” PSE rates! USAS has got to find a more affordable option for swim parents and clubs. This is crazy!!!!!

100% agree with you!. 2 years in a row in with summer nats in california- outrageously expensive. I take it USA Swimming doesn’t really care about what it costs families to attend. I also question a coach who thinks it is OK for a kid to be at meet for 2 weeks straight…not sure I understand why someone would do this to a family?? Unless these kids who are out there for 2 weeks are trust fund kids, the average family doesn’t have $6K to blow on a swim meet.

the hotel rates are NOT $300 a night. Of course if you booked a couple weeks out.

I encourage you to visit the USAS event website for teams to book hotels. The rates haven’t changed since Oct when the rooms were blocked, and the true average rate is $279 but that’s before the 10% hotel tax rate. And, the sad thing is that the hotels that are listed under this average are either in Newark, CA (45-60 min drive to the pool!) or are absolute fleabag hotels like the Ramada in Mountain View. TRUST ME, I’ve been shopping for hotels for these meets for almost 9 months since USAS announced the meet location!

I can’t speak for your experience, I believe you. I booked in June (hotels.com) and got decent accommodation for $150 including taxes

Wow – consider yourself lucky to get that rate! Maybe it paid off to wait until the last minute by booking in June and by NOT using any of the USAS hotels! Got any tips and tricks for Omaha hotels next year for OTs??? I’m not seeing any available hotels within a 15-min drive and/or under $200/night… yet another meet where USAS thinks parents and clubs have unlimited cash for competitions.

Sleep in a cardboard box like everyone else in california