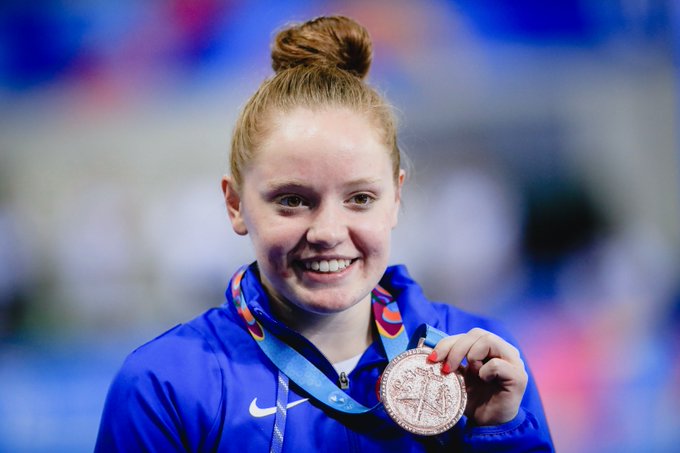 Brooke Schultz won her third medal at the Pan American Games on Monday after finishing third in the women’s 3-meter final in Lima, Peru. Current photo via USA Diving

Brooke Schultz (Fayetteville, Ark.) won her third medal at the Pan American Games on Monday after finishing third in the women’s 3-meter final in Lima, Peru.

Schultz scored 334.85 points to pick up bronze behind Canada’s Jennifer Abel (374.25) and Mexico’s Dolores Hernandez (339.60). Schultz was in fifth place after two dives but jumped up to second with 72 points on her third-round reverse 2 ½ pike. She scored 67.50 points on each of her final two dives, but Hernandez moved ahead of her for silver in the final round.

“It was such a confidence boost for me. I did not have the performance I was hoping to have at worlds [Gwangju 2019 World Aquatics Championships] so to come here and kind of bounce back and redeem myself was a really good feeling,” Schultz said. “My best dive was my reverse, which was the dive that really hurt me when I was in South Korea a few weeks ago, so just to do that and to score well on that, it really put a smile on my face.”

Schultz, who finished 29th on 3-meter at last month’s World Championships, will leave Peru with three medals. In addition to her 3-meter bronze, she won silver on 1-meter and paired with Sarah Bacon (Indianapolis, Ind./Minneapolis, Minn.) for another silver in synchronized 3-meter.

“I came in with no expectations. It’s definitely amazing to walk away with three medals. I was just on the podium thinking, ‘You know what, you did pretty good,’” Schultz said.

Bacon also advanced to Monday’s 3-meter final and finished fifth with 317.30 points. She scored more than 70 points on three of her dives, but a miss on a reverse 2 ½ pike for 42 points in round three dropped her out of medal contention.

Ben Bramley (Wellesley, Mass./West Lafayette, Ind.) also competed in the men’s 10-meter event but did not advance to the final. He placed 13th with 355.20 points.