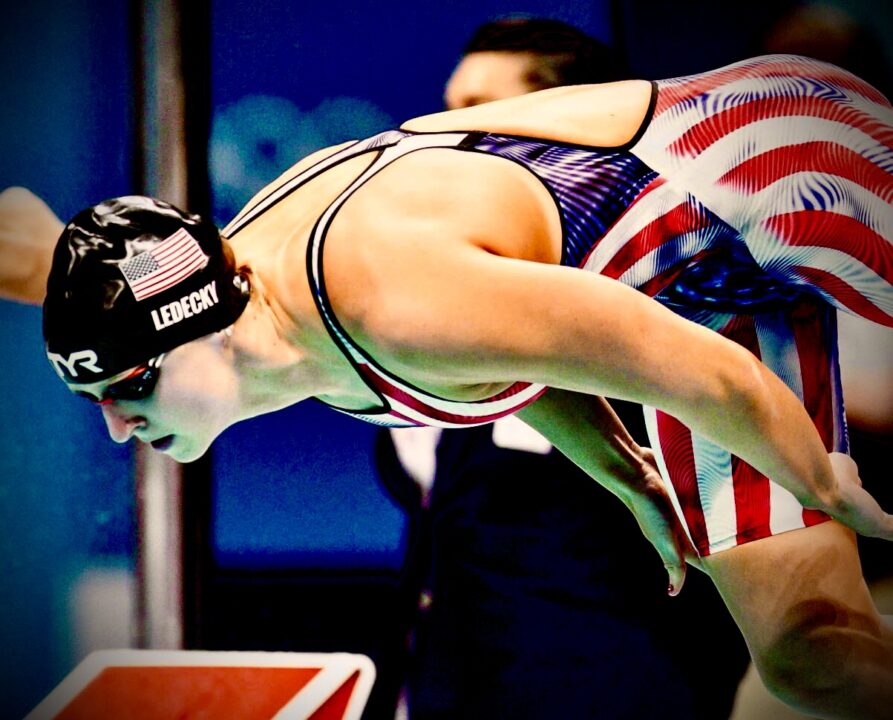 American superstar Katie Ledecky ranks as the 21st most marketable athlete on the planet, moving up seven spots from where she was ranked last year. Archive photo via Jack Spitser/Spitser Photography

Two of swimming’s biggest stars rank among the world’s most marketable athletes in 2022, according to SportsPro‘s annual list which was released earlier this week.

American superstar Katie Ledecky cracked the top 50 for the second straight year, coming in at #21, while British fan favorite Adam Peaty comes in at #90.

From the USA 🇺🇸 21st on our #SP50MM list – and the 9th woman overall – is swimmer @katieledecky.
Discover all the athletes 👉 https://t.co/ltVdeEKWuI #Sportbiz pic.twitter.com/2B422pRVNc

Now in its 13th year, SportsPro‘s Most Marketable rankings consider the evolving nature of athlete marketability in the digital age, using advanced metrics to track brand strength, audience and reach, and economics.

The most comparable athlete to Ledecky’s marketability is another Olympic star, American snowboarder Chloe Kim, who ranks 22nd and has very similar scores across all three metrics (12.02/17.46/6.88=36.37).

The highest-ranked athlete in a sport that is primarily centered around the Olympics was U.S. gymnast Simone Biles, who ranks 11th with a cumulative total of 46.85 on the marketability scale. Biles earned the #1 ranking last year coming off the Tokyo Olympic Games.

Ronaldo earned maximum scores for both audience and reach (50) and economics (30), while NBA superstar Lebron James had the highest brand strength score at 18.71 (out of 20).

Ledecky, 25, has been the most dominant swimmer in the sport for the past decade, winning seven Olympic gold medals and 19 World Championship titles.

Last summer in Tokyo, she won her third straight Olympic gold medal in the women’s 800 freestyle, won the inaugural title in the 1500 free, and claimed silver behind Australian Ariarne Titmus in the 400 free.

With Titmus absent at the World Championships this past summer, Ledecky swept the women’s 400, 800 and 1500 free, and added a fourth gold medal on the U.S. women’s 4×200 free relay.

Peaty, the world’s most dominant male breaststroker, won a repeat gold medal in the men’s 100 breast at the Tokyo Olympic Games, but was forced out of the 2022 World Championships due to injury. At this past summer’s Commonwealth Games in Birmingham, England, Peaty failed to reach the podium in the 100 breast but bounced back and won gold in the men’s 50 breast in front of his home crowd.

Patrick Mahomes at #55? Rory MclIroy at #48?, Novak DJokovic at #46? Aaron Judge at #74? TJ Watt at #95? List methodology does seem suspect. All the forgoing are in TV commercials all the time, while I’ve never seen Lewis Hamilton or Virhat Kohli in a commercial (or even heard of them for that matter).

He exist and is obviously very popular in countries where cricket is played, but he is a virtual unknown in the US, Canada, South Korea, China, Japan, Germany and many other non-English speaking European nations with substantial GDPs and consumers with high income. If I’m an advertiser seeking an endorser, the larger and wealthier the potential consumer base, the more likely I am to engage a product spokesperson. Soccer, tennis and basketball are universal worldwide, so its no surprise Rinaldo, Lebron and Serena rank top 3. But otherwise, I think the listing emphasizes numerical (number of people wise) popularity too much and does not emphasize potential revenue impact in the same way a commercial firm would. No slight intended for… Read more »

I think Kohli is one of the few ones that do make sense on this list. It doesn’t matter whether or not we know him in the west… India has a population of almost 1.4 billion people. If he only appears in Indian commercials, his reach is still astronomical.

It feels like Americans are overvalued on the list, because US has, generally, the highest ad rates in the world. US customers are just worth more, so… Read more »

Ledecky isn’t charismatic and outside of Olympic commercials, what media has she done. She’s no Missy Franklin.

Sponsors certainly seem to find Ledecky quite marketable and authentic. As best I can tell from intenet, her marketability rating is quite justified as she has, or has had, significant national and international sponsorships with TYR, Ralph Lauren, Panasonic, Chocolate Milk, Oura, LaCroix, Visa, Hersheys, Mattel, Adidas, and Bic. I think the thing she did with the swimming a lap with a cup of choc milk on her head got like a trillion views on TikTok.

That list makes zero sense. Even a wildly charismatic, successful, supermodel-level attractive and overall likable swimmer would come behind pretty much any first tier soccer player in the world in terms of marketability.
Ledecky is successful and nice, but awkward in interviews and nobody looks attractive in front of the camera when you’ve got wet hair and a red face.
It’s almost silly how made up female track athletes are when they race and yet… Sha’Carri Richardson, who hasn’t even gone to Olympics once in her life, is more marketable than Ledecky.
Peaty, as a man, already has a leg up. But it’s almost laughable to claim he’s more marketable than a soccer star. Footbal rules in the UK.

How many hundreds of millions dollars of products she has sold?

The makers of these lists have access to proprietary data calculations to which the public generally does not have access–calculations which include information such as Q scores, image polling, popularity/authenticity/stability ratings, consistency/dominance/longevity of athletic performance, demographics, market size, and product sold/profitability vs cost of sponsorship. For hypothetical example, would you rather sell $5 mil of product by paying $3 mil to Federer, or sell the same $5 mil of product by paying $1 mil to Ledecky? Would you rather sell a small amount of product in Norway/Europe by endorsing Haaland, or sell a much larger amount of product by endorsing Ledecky at the same cost in the United States? These types of calculations play into “marketability” ratings and rankings.

I doubt you’d get Haaland as cheaply as Ledecky. But Europe also has more than twice the population that the US does and the Premiere League is quite popular outside of Europe as well (Asia, South America, Africa). So the potential reach and purchasing power of the markets one reaches with Haaland (v Ledecky) is far greater. There is just no scenario in which one of the best soccer players in the world, even if he’d only play for a single season at a premier league club,… Read more »

I wouldn’t buy a single product from a company who used Megan Rapinoe in their ads and/or promotions.

this is a bad list. Are they really saying that Alex Morgan is more marketable than Mbappe, Salah, Neymar and Haaland?

He is in world’s top 10 highest earner sportsman every year for almost two decades including last year.

And he’s behind Ledecky? GTFO

Leclerc getting robbed of the WDC by Ferrari strategy