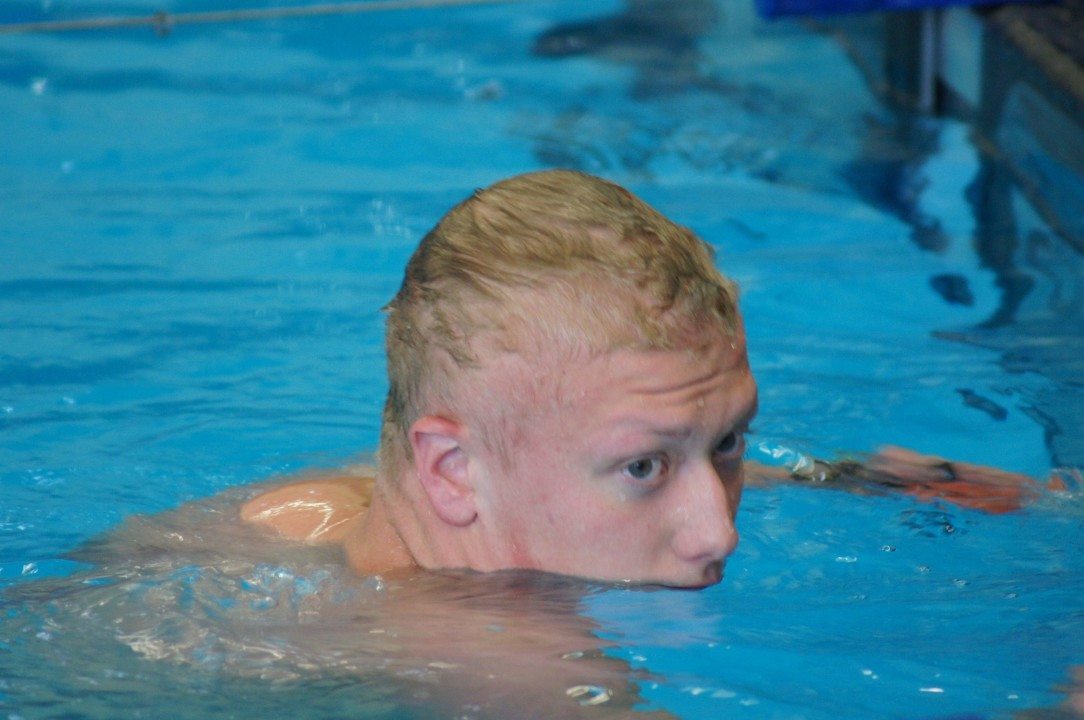 Paralympian Robert Griswold has been accused of sexually assaulting at least one member of the U.S. National Team, a swimmer with intellectual impairment. Archive photo via Daniel McCord/C-N Swim

Christie Raleigh-Crossley, a former NCAA Division III National Champion at Rowan University, broke an American Record on Saturday at the US Para Nationals.

“It was a crazy morning,” said the 20-year-old from Vernon, B.C., who swims for the KISU Swim Club. “I don’t know what I ate for breakfast.”

Paralympic gold medalist Robert Griswold has been accused of sexually assaulting at least one member of the U.S. National Team, a swimmer with intellectual impairment.

Sources told SwimSwam that Griswold, a two-time Paralympian who won two gold medals and broke a world record last summer in Tokyo, used his power within the para-swimming community to groom his teammate and threaten retaliation if he spoke out.

Two months ago, when the mother of Griswold’s accuser discovered journal entries describing alleged abuse happening at the Paralympic Training Center in Colorado Springs, she immediately drove nearly 1,000 miles through the night to bring her son home. Soon after, on August 23, Griswold was temporarily suspended by the U.S. Center for SafeSport for the second time due to allegations of misconduct.

A police report has been filed and law enforcement has conducted lengthy forensic interviews, but Griswold has not been arrested or charged with a crime as of publication on Thursday. Colorado Springs Police denied SwimSwam’s records request “due to an active/open investigation.” Although some close to the situation are optimistic that he will be arrested soon, they are also growing frustrated with how long the police investigation is taking.

A lawyer representing Griswold said that he “vehemently denies any wrongdoing.”

Griswold allegedly raped his teammate to the point that rectum surgery was required, according to sources. The alleged victim, who competed in the S14 classification for intellectually impaired swimmers with IQs of 75 or under, had dreams of attending the next two Paralympic Games in Paris and Los Angeles. Swimming was his outlet. Now his mother says he no longer wants to get in the water because of what he experienced, which allegedly included other forms of abuse as well.

An NPR series from 2018 revealed that people with intellectual disabilities are sexually assaulted at more than seven times the rate of those without disabilities.

U.S. Paralympic Swimming did not respond to a request for comment regarding claims that they failed to protect their most vulnerable athletes. Griswold was added to the SafeSport database in September of 2020 for allegations of misconduct, but he had his suspension lifted before winning gold medals in the S8 100 backstroke and 100 butterfly at the Tokyo Paralympics.

“He was essentially in charge of the intellectually disabled athletes on our team and would take them everywhere and get them ready,” one National Team member said of Griswold. “It was a little weird, because us as teammates, we always were like, ‘Why isn’t there a staff member on the staff to solely take care of these athletes? Robert’s got races, he’s got stuff to worry about. Why is he in charge of these two guys?’”

Sources told SwimSwam that Griswold carries significant influence in the para-swimming world in part because he helped create the algorithm that decided Tokyo Paralympic roster selections and relay lineups for the U.S. National Team. In June, after winning six medals at the 2022 World Para Swimming Championships in Madeira, he was elected by fellow athletes as the lone American representative on the international Athletes Advisory Group (AAG). A U.S. Para Swimming spokesperson said he is not currently serving on the AAG.

Members of the National Team allege that U.S. Paralympic Swimming leaders ignored complaints against Griswold and hid them from teammates for years.

“Negligence and secrecy is what allowed the abuse of some of our most vulnerable teammates on U.S. Paralympic Swimming,” another National Team member told SwimSwam. “Administration and leadership within the organization withheld pertinent information to the safety and well-being of the majority of their athletes to protect the reputation and privilege of a favored individual. They are equally responsible. Had our community been made aware of all previous allegations, something as heinous as that which has now occurred would have most likely been avoided.”

After publication of this article, an attorney representing several families allegedly affected by Griswold released a statement confirming there are multiple accusers involved.

“We can confirm that the events reported today in the SwimSwam article are unfortunately reflective of the facts and circumstances regarding this tragic incident,” said Frank Salzano of Salzano Ettinger Lampert & Wilson. “Our law office, along with Erickson Kramer Osborne, represent several of the families impacted by this atrocity. The families intend to seek immediate legal redress against all of the responsible particles, including, without limitation, Mr. Griswold, as well as the U.S. Paralympic Swimming for its negligent handling of Mr. Griswold’s predatory acts and behavior, which the U.S. Paralympic Swimming was aware of, and failed to properly prevent. The families will not be making any further comments at this time, and we ask that you respect their privacy during this difficult time.”

Note: SwimSwam by policy doesn’t identify victims of sexual assault without their permission. The identifying details in this article were approved by the victim’s legal guardian.

Several people, including current and past Paralympic athletes have posted on the Swimming World article and it still says 0 comments. I applaud Swim Swam for have the courage to discuss this and the moderator for correcting inaccuracies.

Posting this here too… anyone wonder if he got married a year early (insta says 2022, wedding website 2023) to have some time as a couple before legal troubles got crazy?

Are there any updates regarding this? Staff placed on leave, arrests, etc.? It’s been 2 weeks since this article was published

9
0
Reply
anon
Reply to  Thank you

I sent this story to an influential ESPN personality. luckily that person responded and that person told me they shared it with the larger production team.

idk if anything will come from it. but if so it would likely be after official charges or after sufficient time to gather due diligence, experts, reporters, etc. Unfortunately the Paralympic community doesn’t have the national journalistic attention to rely on already vetted sources.

Get ready Robert.
It’s over. It’s all gone.
They are coming for you.

Ohh.
Some people want Robert to continue his abhorrent behavior.
Got it.

Wonder why it is that this article has been at the top of news queue every time I navigate to SwimSwam.com, when normally this would have disappeared by now unless you dig into older stories.

because its really important and nationally underreported

why would you wonder that of all things?? I am glad, this needs to be seen. My guess is due to that it’s one of the most read, which keeps it at the top and I hope it stays there!

Somewhat of a rhetorical question for Mel, Braden: Is SwimSwam or USA Swimming associated with any of IPC’s global partners https://www.paralympic.org/sponsors? The mere act of inquiring of a sponsor is one sure way of obtaining information. There’s no perfectly proper protocol to follow when such a reprehensible act has been committed…

It is apparent to anyone who has ever been involved with para swimming that there is a long history of catering to high profile athletes. These athletes are held to a different standard then everyone else and it is not in higher of nature. For years the “stars” of the Paralympic pool have been monsters cloaked in pretty and handsome masks. The ones who are receiving ESPYs for being such inspiring humans are also the ones undermining the careers and reputations of up and coming athletes. They are the ones who have created this toxic environment where actions never seem to have impactful consequences. This isn’t something new or singular to this administration. This is deep rooted in the history… Read more »

43
-3
Reply
Thank you
Reply to  isaidwhatisaid

As a current athlete who is impacted by this situation (I am using a spam email in the fear of being retaliated against), thank you for being brave enough to speak out. Things need to change. It’s a shame how widespread drama, rudeness/pettiness, and even the worst of criminal behavior is throughout paraswimming. I don’t want to go into more details to remain anonymous, but I am ready for this change. The environment needs to change NOW. Athletes need to be supported NOW. And anyone involved in this heinous activity needs to be reprimanded NOW.

I’m sorry you had to even think of needing to use a spam email. It’s sad that athletes don’t feel safe to speak up. That in itself should scream that changes need to be made. Erin, Nathan and Julie cater to turning a blind eye. No more. We’re all not going to stand for it anymore. Protect our athletes. They deserve to be safe. They deserve to be heard. They deserve to compete.

Thank you and yes I agree!

Isaidwhatisaid is the most accurate and well written description of the Paralympic swim team. An environment we had thought to find acceptance was just that-cruel and biased.

Clean house! USA Swimming and USA paraswim hide behind Safesport to protect the management. The environment is toxic and allows this type of behavior far too often. That Griswold was overseeing athletes as an athlete is reprehensible-did he go through the background checks that coaches, officials, and other volunteers are required to do? Safesport’s videos and training never focus on teammate behavior; mostly on coaches. The 18+ athletes have to take the athlete protection training, but I haven’t seen any requirements for background checks. That Griswold had a previous suspension should have disqualified him from being a roommate and any personal contact with other athletes, regardless of the outcome. S14 athletes should never be under the care of other athletes.