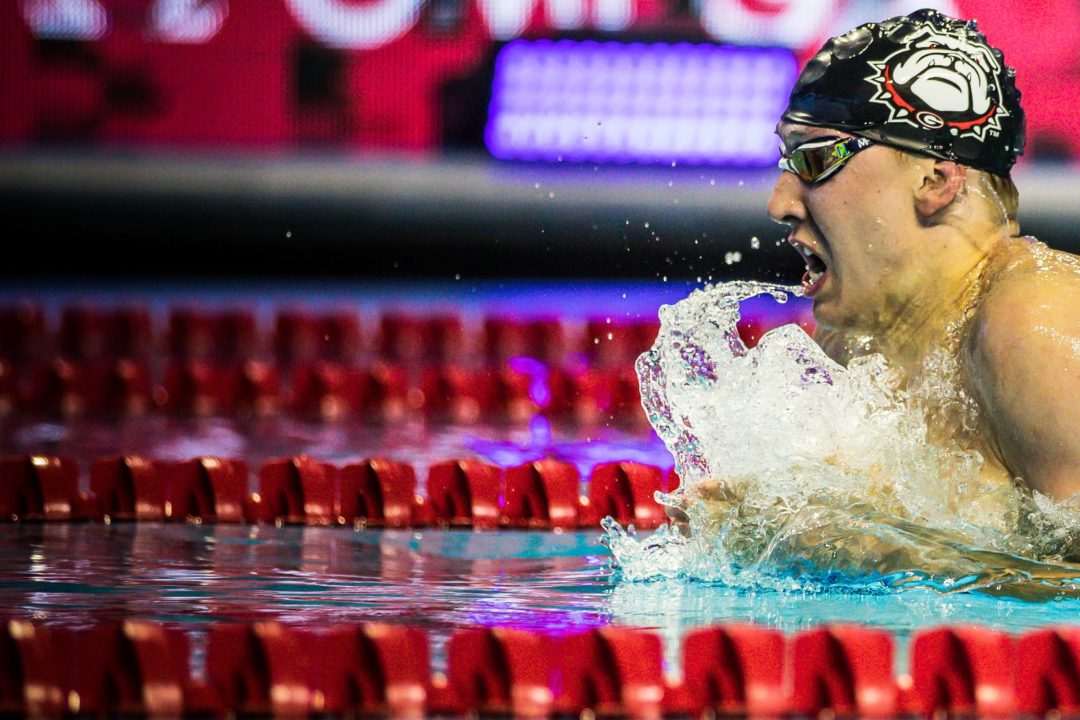 The psych sheets for the Greensboro site of the US Open were released, highlighted by Olympic Medalists, US National Team Members, and age-group standouts. Archive photo via Jack Spitser/Spitser Photography

The psych sheets for the Greensboro site of the meet were recently released, highlighted by several Olympic Medalists, US National Team Members, and age-group standouts.

Berkoff currently sits atop the rankings in both the 100 and 200 backstroke, her signature events. In 2019, Berkhoff won the 100 backstroke at the World University Games, and she was a member of the Pan Pacific Championship Team in the 200 backstroke in 2018.

Sumrall is looking to continue her comeback streak heading into the Tokyo Games after missing making the Olympic Team in 2016, where she came .54 behind Molly Hannis to finish 4th. She is entered to swim both the 200 and 100 breaststroke. In the 200, she holds the top seed with a time of 2:25.17, while she is seeded 2nd in the 100 behind Rachel Bernhardt.

Curzan leads a very strong contingent of age-groupers swimming at the meet, as she is currently seeded in the top 3 in 4 different events. The 16 year-old Curzan’s highest seed is 1st in the 100 butterfly, where she is looking to chase Tori Huske’s 15-16 National Age Group record of 57.48. Her best time in the event currently stands at a 57.57. Curzan is also seeded second in the 50 freestyle and 100 Backstroke, while she holds the third seed in the 100 freestyle. Notably, Curzan is also set to chase the NAGs in the 50 and 100 freestyle after breaking the short course records in both events in July, posting times of 21.51 and 47.23, respectively.

Joining Curzan is teammate and fellow 16-year-old Charlotte Hook, who is a member of the US National Team. Hook is currently seeded 1st in the 200 butterfly by over 6 seconds with her best time of 2:07.87. On Friday morning, Hook is currently scheduled to do a tough double with the 400 IM and 100 butterfly back-to-back. In both events, she is seeded 4th overall.

The sprint freestyle events on the men’s side may be some of the most anticipated races of the entire meet. 18-year-old US National Teamer David Curtiss currently stands atop the 50 freestyle rankings with 200 yard freestyle American record-holder Dean Farris seeded second. Farris took a redshirt from Harvard last season to train for the US Olympic Trials under Eddie Reese at Texas, shifting his focus to long course for the time being. Lurking in the 50 freestyle field are also Aiden Hayes, the top recruit in SwimSwam’s rankings of the class of 2021 and Schooling.

there are also time trials

Don’t expect more if your coach is Sergio