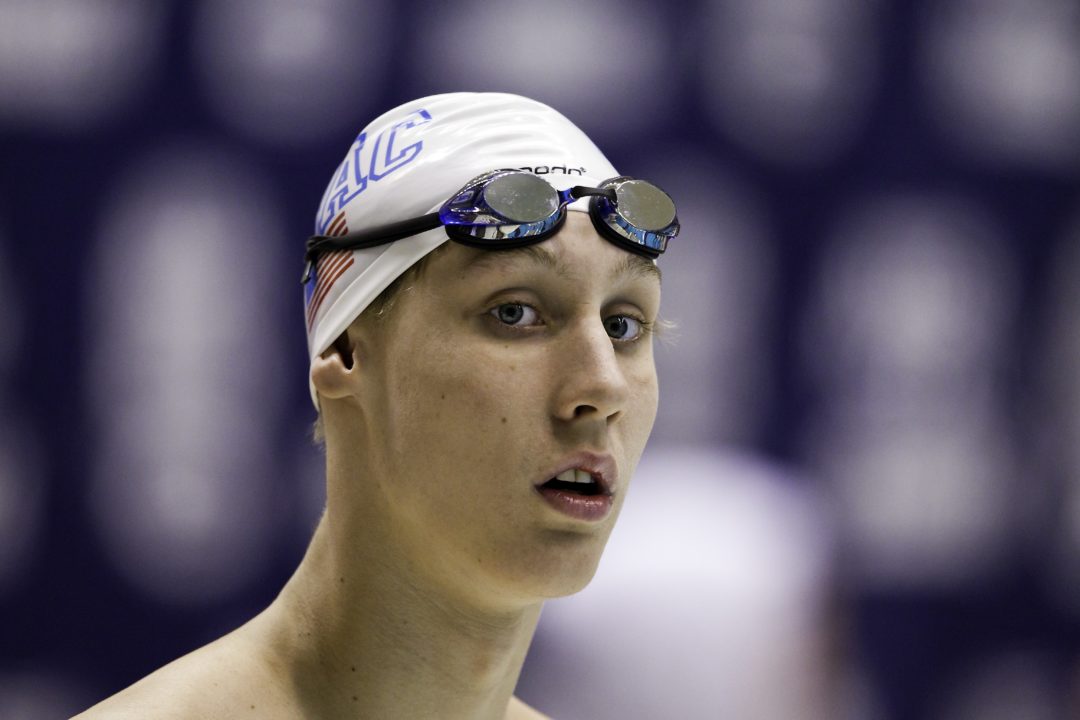 Chase Kalisz (above) took his second Meet Record of the week to wrap up the 2012 Jr. Pan Pacs. (Photo Courtesy: ©Tim Binning/TheSwimPictures.com)

The final day of the 2012 Junior Pan Pac Championships pool swimming continued what we’ve seen all meet: with record after record, and fairly balanced medal-winning from across the board. The Americans still dominated the team scoring format, but their competitors from Australia, Canada, and Japan combined to win 5 of the 8 individual events on Saturday.

The event will conclude on Monday with the open water men’s and women’s 10km swims.

It’s about time that Canada’s Erika Seltenreich-Hodgson found herself a nickname, because she just jumped a level in the swimming hierarchy with her 2:12.93 win in the women’s 200 IM in Hawaii. She has spent the last year gathering tons of big-time meet experience: she swam at Junior Worlds last summer, she performed very well at Canada’s Olympic Trials (even though she missed the team), and she traveled to Europe for the Mare Nostrum series in June.

That all paid off here as she swam a perfectly-patient race. She hung back of Americans Celina Li (3rd in 2:14.16) and Kaitlyn Jones (2:14.31) through the first half of the swim, and then exploded on the breaststroke to overtake the lead.

Here’s what’s really cool about this swim: her previous best time was from the Canet stop of the Mare Nostrum series, and she had identical splits through 150 meters. But the difference between that 2:13.9 and this 2:12.9 came entirely in the closing 50 meters. That’s a great swim, and we should expect to see her in Barcelona for the World Championships next year.

Japan’s Chihiro Igarashi took 2nd in 2:14.04, followed by the aforementioned Li and Jones.

After being so dominant in the 400 IM and crushing his personal best by three seconds, North Baltimore’s Chase Kalisz was a bit surprising to only cut just over a tenth from his best in this 200 IM. That still left him with a 1:59.51, breaking David Nolan’s Meet Record of 2:00.6.

Kalisz and Daiya Seto had a great battle in this race (reminiscent of the one they had in the 400 IM, where Seto was DQ’ed). Seto had a very good breaststroke leg, but it still wasn’t good enough to match Kalisz’s (the pair were nearly identical on the other 150 meters), and he finished 2nd in 2:00.33. The top three, with third going to Japan’s Keita Sunama for his second individual medal, all tied-or-broke the old Meet Record.

Georgia has to be happy with the results of this race; another of their 2012 recruits Ty Stewart was 4th in 2:01.45. He and Kalisz will join 100 free champion Matt Ellis in Athens next season, which makes the Bulldogs very exciting for the next four years.

American 16-year old Andrew Seliskar won the B-Final in 2:02.78. Reports are that 16-year old Gunnar Bentz touched the wall faster than Michael Phelps’ National Age Group Record in prelims, but he was DQ’ed so official results couldn’t confirm that.

Both of Australia’s sprinters, Alexandra Purcell and Ellen O’Rourke, came into this meet with expectations of maybe dipping under 25 seconds in this meet, and though neither got there they still performed very well with a pair of medals. Purcell took the win in 25.15, and O’Rourke was 3rd in 25.40.

American Olivia Smoliga, going into her senior year of high school, continued to add to her recruiting resume with a 25.39 for 2nd; she’s spent the last year working on expanding her skills beyond the 100 backstroke where she placed 4th at the Olympic Trials.

Speaking of “showing versatility,” Rockville-Montgomery Jack Conger continued to do just that on the final day of pool swimming. He won the 50 free in 22.69, another .03 shaved off of his best time in prelims, to grab his 4th win of the meet (100/200 back, 400 free relay).

Conger is a little bit more versatile than his rival, and fellow high school senior, Ryan Murphy (though Murphy is of course outstanding as well outside of the backstroke), but from a USA Swimming perspective, it would be great to see Conger focus on either fly or freestyle: that could result in a great relay by the 2020 Olympics. It appears, though, as though Conger’s main focus is still backstrokes (and rightfully so), which means for now we’ll have to settle for a phenomenal rivalry.

He was the only swimmer under 23 seconds in the final. Australia’s Regan Leong was 2nd in 23.02, and American Erik Risolvato was 3rd in 23.17. Risolvato, a high school senior out of Ohio, had the second-fastest time of the whole day with a 22.98 in prelims.

Another Australian, Andrew Digby, was 4th in 23.29, which wrapped up a great meet for him so far. The Australian senior sprinting squad is very good and very young, and there’s yet another generation already nipping at their heels. Men’s sprinting is healthy in Australia – another from the Dolphins squad won the B-Final in 23.13.

Other Americans were Kyle Darmody in 23.23 for 10th and Jonathan Grodecki in 23.34. Matt Ellis would have been in this B-Final, but scratched.

The Canadian women’s team is perhaps best known for their breaststrokes, and they were singing “O Canada!” once again in Honolulu as Kierra Smith (2:25.78) and Mariya Chekanovych (2:25.96) went 1-2 on Saturday evening, just like they did in the 100 on Friday. Even at two-tenths of separation, this race was a relative landslide compared to the sprint event, but it still came down to the final touch. Smith again got her fingertips on the wall.

With this time, a new Meet Record and personal best by a second, Smith gives Minnesota a great chance at two A-finalists in the 200 breaststroke next season: Smith and 2011 champion Haley Spencer. Nothing will come easy, though, as that event, just like this race was, will be stacked.

As for Chekanovych, who begins competition for Division II Simon Fraser University, she now stands as the favorite to win that NCAA title even as a freshman.

American Annie Zhu, yet another standout future Georgia Bulldog at this meet, capped a fantastic summer with a 2:26.65. She moved to train at North Baltimore this season, and that move has paid off in spades. After going almost three years in this, her best event, without a personal best time, she’s now cut two-and-a-half seconds off in the last three months. That’s a stunning turnaround, and just more evidence that North Baltimore is more than just Michael Phelps.

In between sessions today in Honolulu, the Japanese staff were touting that 18-year old Akihiro Yamaguchi was taking a run at the World Record in finals. That would seem like a tall task for a swimmer this young and on a taper a second week in a row, but nobody saw him putting up the third-best time in the world last week either.

Ultimately, he paced this swim very similarly to what he did at the Japanese High School Championships last week, but came up short of that time in 2:08.08. Still, considering age, that’s a great result. It’s no wonder that the Japanese federation is pushing a possible World Record from him: he’s the future of the sacred breaststroking group in that country.

Nobody was within 5 seconds of his result, the most dominating swim of this meet, but Yamaguchi’s countrymate Kazuki Kohinata took 2nd in 2:13.13.

Becca Mann has won some B-Finals at this meet, but she wrapped up her trip in the pool in Hawaii with an overall event victory and a new Meet Record in the women’s 1500. She swam a 16:11.98, which breaks the 13-14 National Age Group Record set by Michelle Richardson back in 1984. Richardson’s old mark was 16:12.57, and once this swim is confirmed, it will fully knock Richardson out of the NAG Record books.

Her American teammate Danielle Valley, and Olympic Trials finalist in the 800, grabbed silver in 16:26.93. That an indicator of how good this swim was for Mann: nobody was ever really close to her.

The Aussies completed a clean-sweep of the men’s distance events (400-800-1500) with another win here, with Matthew Levings winning and breaking a Meet Record in 7:56.94. That cuts more than a second-and-a-half off of the old record held by countrymate Ryan Napoleon from 2009.

Levings already won the 400 earlier in the meet, and doubled up with this victory.

The American women finished a sweep of the relays at this meet with a 4:03.93 win in this medley: missing the Meet Record by two-tenths. The group of Olivia Smoliga, Annie Zhu, Katie Kinnear, and Simone Manuel ran away from the competition; especially Manuel who swam her 3rd lightning-quick 100 free of the week with a 54.21 anchor.

In the men’s race, one that was expected to be a huge battle, the Japanese squad ended up running away with the victory in 3:37.67, a new Meet Record (breaking the one set by the Americans in 2010). The United States was 2nd in 3:39.37, with the group of Jack Conger, Will Licon, Maclin Davis, and Matt Ellis swimming for silver. The US actually were better on three legs of this race, but Yamaguchi again dominated in the breaststroke to give Japan nearly a three-second lead.

Australia placed well back in 3rd, followed by Canada and New Zealand.

The Americans took the team title, followed by Australia just eking out a runner-up finish ahead of Japan, despite the Japanese winning two of the three men’s relays. All 7 nations that competed at the meet scored at least 1 point.

If it’s right it’s very impressive for a 16-year-old swimmer. We know him for 2 years now and he’s very talented. He has a long body made for swimming. Big talent.

He was DQ’d for not finishing on his back during the backstroke leg.

The internet feed was way better than it was on friday. Seemed like a really fun meet with the four top teams having something to celebrate and build upon. Everyone knew the U.S. was going to win big and the turning point was Thursday’s morning prelims. Canada improved a lot from 2 years w/ 3 meet records and the Japanese breaststroke factory is firing on all cylinders. Enjoy the day off tomorrow kids…..2012/13 starts Tuesday.