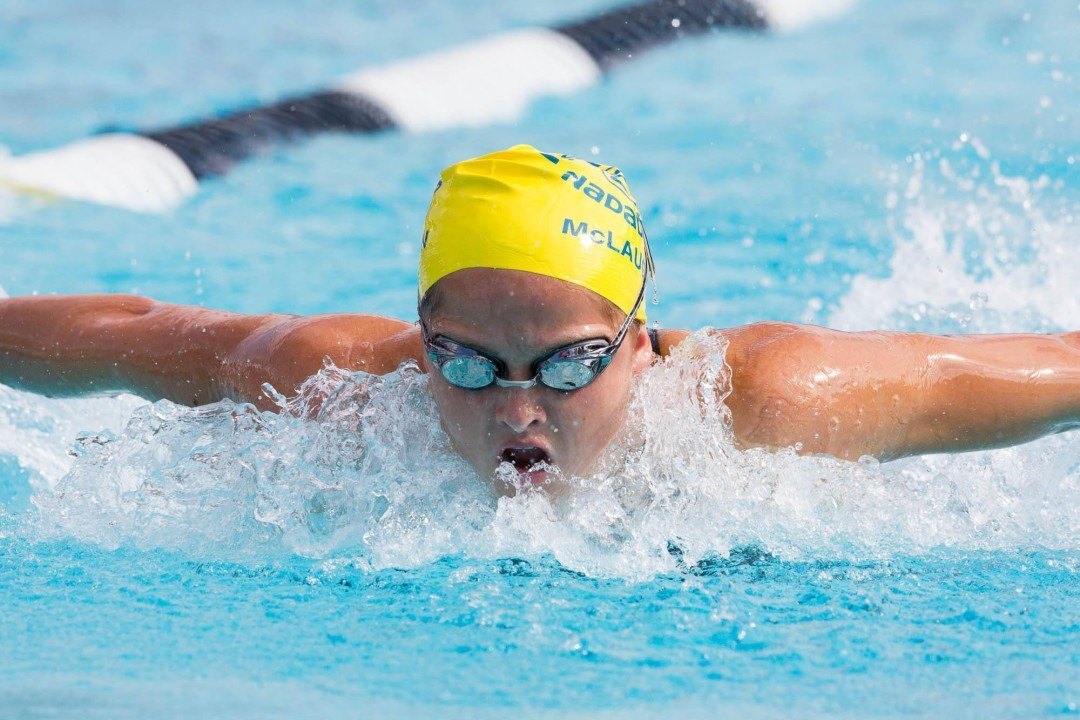 Teri McKeever and the Cal Golden Bears have landed their next superstar recruit, as Katie McLaughlin, the #4 recruit in the... Archive photo via Tim Binning/TheSwimPictures.com

Teri McKeever and the Cal Golden Bears have landed their next superstar recruit, as Katie McLaughlin, the #4 recruit in the class of 2015, shared her decision with SwimSwam via text message on Sunday night.

“I fell in love with the team and coaches and the atmosphere at Cal, and I knew where my heart was,” McLaughlin said of her decision.

McLaughlin set the Junior World Record in the 200 meter fly at the 2014 Pan Pac Championships, where she swam a 2:07.08. That swim earned a bronze medal at the United States’ primary international championship for 2014 and put McLaughlin on the senior National Team.

Katie McLaughlin, the top butterflier in the class of 2014, has verbally committed to Cal.

For the Mission Viejo product, however, that’s just the tip of the iceberg. She’s also an immediate free relay threat with the following best times in yards:

That 200 free would’ve put her solidly into the B-Final at NCAA’s last year, meaning that as a freshman, she should at least be a three event individual scorer for Cal.

For the deep Golden Bears squad, no spots on any relays are a given. When McLaughlin arrives, she’ll still have to battle the likes of Rachel Bootsma, Farida Osman, and Sophia Batchelor, among others, for spots on the medley relays.

With Kaylin Bing, Caroline Piehl, and Missy Franklin being finished with NCAA swimming by then, however, her odds of an immediate contribution to the free relays will be a less crowded road. Even last year, she would have likely been on Cal’s 800 free relay (a relay that won the NCAA title with no seniors, at that).

McLaughlin will be a senior at Santa Margarita High School last year, where she began swimming as a junior after transferring from JSerra. She won the CIF Southern Section Division I title in the 200 free last year in a new Division 1 record and 100 fly in 2014, both of which broke her own Meet Records set a year prior. She’s won five individual titles in six tries so far in her high school career, with the only exception being her freshman year where she was 2nd in the 200 free.

McLaughlin is the 3rd swimmer in this year’s top 10 to make her commitment publicly known, and all three have pledged to the Pac-12. The other two are #1 Katie Ledecky, who is headed to Stanford, and #7 Quinn Carrozza, going to Arizona.

I think its a great day for all of these kids and their parents. They have worked so hard to get to this point and this is a major accomplishment for them. They may turn into great international swimmers or they may not, at this point it really doesn’t matter.

As for Missy, it seems to me that she plans to leave school to concentrate on the olympics. She sounds like she is having a great time in school. Whatever happens in the future, she’s having a great run and enjoying it. Good for her. She will never satisfy everyone.

Michael Andrew is killer fast. When’s his next nag?

Not sure you read the above article but its about Katie McLaughlin committing to CAL not about Michael Andrew!! Give her the attention – he gets enough of it……..

It seems anything that comes up positive about Cal’s Women Swim Program, you 3 have to make derogatory comments either about the swimmers’ college choices or belittling HC Teri McKeever and even one of you hitting Cal’s academic status.

(1) These current top high school girls and thousands of others make new friends through various meets and some decide to opt at schools that they can continue their relationships. Maybe if you read some Twitters or Facebook comments by some of these young ladies you will learn why they may have made the decisions for college they have.

(2) Sorry Missy Franklin did not come up to your expectations her Freshmen year at Cal, but as… Read more »

Missy’s backstroke times this season = drastically dropped from last year since she trained @ Cal. It is evident that competing at college level is not working for her. Terri made her compete in 500m freestyle for crying out loud!!!!!!!!! Who cares about the 500m freestyle??!! Her development is in jeopardy. I will not be shocked at all if Missy will not be back in her usual best. I think it was just a bad decision IMO.

Longseeker – You can’t reason with someone like Pol/Swimnerd who is delirious.

1. Absolutely – successful, intelligent, grounded, and ambitious people usually come together when egos are not at play.

2. Missy will end up perfectly fine in life – she lives up to her own objectives and has ownership over them. She does not live to please those in the peanut gallery.

3. You don’t have to dig too deep to look at the number of student athletes coming out of the Cal Aquatics program that have gone on to pursue graduate degrees, entered the entrepreneurial startup tech community in the Bay Area, or have pursued other endeavors at a very successful level.

Any idea who runs collegeswimming.com? Way behind on updating these commitments. When do they add the class of 2017?

And they had Michael F. Phelps as the 12th ranked recruit in the 2015 men rankings.

Athletes are responsible for updating their own commitments on collegeswimming.com

No interest in UCLA by the top end So Cal swimmers?

Swimnerd, My guess is that McLaughlin doesn’t have much respect for your opinion, especially with the way you stated it. Its not the college, its the individual. Missi’s swim’s are Missi’s, not CALs. And don’t make me post that Richard Sherman video 🙂

I’m sure they will waste her talent and ruin her potential like what happened to Missy.

Congrats to Katie on her choice. Wishing her all the best! Will also be fun to watch her race Janet Hu in both the fly races (with Janet’s yards times faster in both…). Hopefully they push each other to some fantastic times! They have different strengths and weaknesses – both great talents! Janet’s yards prowess; Katie’s more distance focused fly. Will make… Read more »

If to go PB on Yards she gets worse on LCM.. I would call that a waste of talent. LCM is the real deal, OG and Worlds are far more important than NCAA..

I was even kinda curious to ask why SO many people post on topics about College/High School Swimming but they do not post or do not have the same enthusiasm about Worlds and OG..

Who cares about the NCAA records? No one cares. If you’re a dominant swimmer at the NCAA and failed to medal against the World’s best then no one will bring your name in the best swimmers conversation list. No one will remember you except in college swimming.

Teri is an overrated coach. Wasted Missy’s talent. And now Missy’s development is in jeopardy.

pol – college swimming is the most popular thing in swimming besides the Olympics.

That’s like saying “who cares if you were a great college quarterback, if you didn’t make the Hall of Fame in the NFL, you’re nothing.”

Tim Tebow was a phenomenal college quarterback. He made things a lot of fun to watch for four years. He didn’t make it in the NFL, but that doesn’t take away from the excitement that he gave the fans in college.

Missy can still get her education even if she doesn’t swim under Terri. Look how her time drastically dropped this year. The girl won 6 golds at Barcelona in the World Championship. Her development at Cal is a waste. Pelton is a monster in College but when she’s competing against the World’s best, she’s like an amateur compared to them.

pol – a lot of people remember how good Michael Jordan was in college. He took North Carolina to the 1982 title and made the game winning shot in the championship game. He was the Player of the Year in 1984 before leaving early to go to the NBA.

No. Ask any fan about basketball and no one will remember Michael Jordan’s college days. Yeah, he won a National title with the game winning shot, hurray! But it will forever be a footnote. Michael Jordan became a star because of his career in the NBA.

Just like Missy now, this is alarming for Team USA. If Franklin doesn’t win a gold medal especially in the backstroke I will blame Cal and Teri for that. Cal’s program is good for college swimming, only,but against the best in the world? NO. The moment Missy decided to compete in college swimming and trained under Teri, her glory days is over.

POL: I’m not sure if you’ve ever been part of a team, but college swimming is, in my opinion, the climax of team environment in a swimmer’s career. Yes, you can still be on a national team representing USA. But it’s different. You get to spend 4 incredibly fun years with your teammates, some of whom may be your roommates/housemates. I’m not saying one is better than the other, but winning an individual title and winning a team title is also different.

Missy and Katie will be great. You don’t need to worry.

Very disappointing decision by McLaughlin. Must have bought into McKeever’s touchy-feely sales pitch at Pan Pacs who knows? Someone should really look into the unfair advantages that are given these head coaches over starstruck first-timers on these international trips.

Had McLaughlin given more thought to her impulsive commitment, she would have noticed the disturbing trend surrounding the arrested development of star recruits such as Pelton, Bootsma, Garcia, Li & Vredeveld to name but a few.

Why even Franklin has gone backwards in long course since taking up with McKeever. Her slowest times in years on the Grand Prix circuit, followed by not making it to the 200 fr final down under. Got soundly whipped by Seebohm & Hocking… Read more »

There may be legitimate criticism about schools, programs, and coaches, but deliberately raining on a 17 year’s parade when she’s made an informed decision about her athletic and educational future is beyond pathetic.

Katie’s a great girl and she, her family, and coaches are clearly thrilled by the opportunities which await her in Berkeley. Sadly some people don’t have the common decency to respect other’s choices and boorishly think they’re in a better position to determine the best environment for others’ lives. Katie and her family are clearly celebrating, but that’s somehow an affront to a few here.

Again, not saying there can’t be legitimate criticisms of Teri and/or Cal, but this isn’t the appropriate time/article to vent. It’s… Read more »

The Stanford women do not have an impressive record either. I am not sure why you are calling out Teri when the majority of Stanford’s team was faster in high school than they were at Nationals this year. Sarah Haase? Allison Brown? Julia Anderson? Lia Neal? All Olympic Trial semi-finalists who were slower this summer at Nationals.