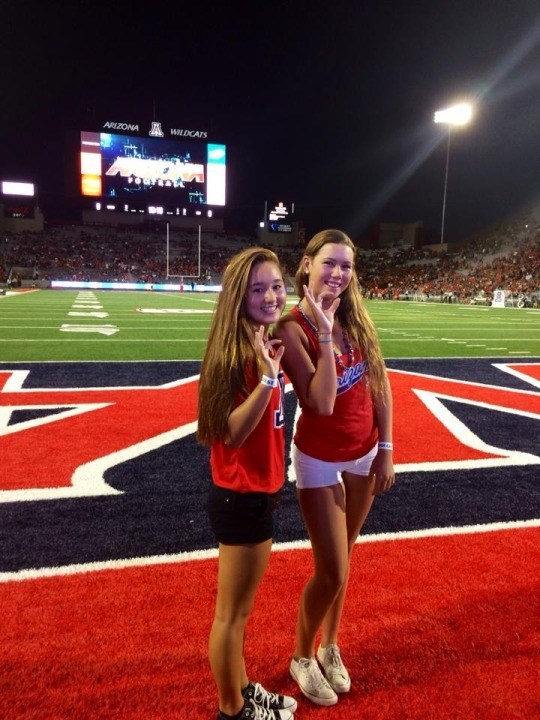 The Arizona Wildcats have been almost unstoppable early this recruiting season, with already six verbal commitments before most of the major programs have gotten more than two-or-three.

The three latest additions all came this weekend, with Emma McCarthy, Sarah Shimomura, and Annie Ochitwa all giving verbal pledges to Rick DeMont, his women’s recruiting coordinator Brandy Collins, and the Arizona Wildcats.

McCarthy comes from North Bay Aquatics in Larkspur, California where she also competes for Redwood-Visalia High School. She’s a talented and versatile freestyler who as a junior made her first Winter Nationals cut in the 200 yard free, swimming a 1:49.33.

This past summer, she really made some progress in long course, and finished the season racing at NCSA’s in Indianapolis.

She had several lifetime bests at that meet, and while some drops (100 free – 8-tenths over the season) were bigger than others (200 free – 1-tenth over the season), the depth of her season-long performances should great progress. Year-over-year, she made a lot of improvements as compared to similar meets last year, which is a good sign for her overall development  – especially as a relative latecomer to the sport, beginning serious year-round training in 8th grade.

McCarthy has an impressive athletic pedigree – her father Mike McCarthy was a two-time Olympian in track cycling in 1988 and 1992, and won the individual pursuit event at the 1992 UCI World Championships.

Among the reasons she cited for choosing Arizona is what she describes as a “very clear, strong swimmer-coach relationship.”

“There’s a very clear, strong swimmer-coach relationship.” McCarthy said. She also was impressed with the amenities at Arizona, mentioning the facilities, as well as opportunities to volunteer and intern. She plans to study business at the Eller College of Management.

McCarthy, who plans to study business at Arizona, is the daughter of two-time Olympic track cyclist Mike McCarthy.

Shimomura is another freestyler who is also from Northern California and specifically the Santa Clara Swim Club.

And last, but not least, is Ochitwa, who along with the already-committed Brooke Hansen is one of the top two commits out of the state of Colorado in the class of 2015. She swims at the Denver Swim Academy and attends Thunderridge High School.

Ochitwa is the defending Colorado 5A State Champion in both the 50 and 100 yard freestyles, swimming 23.11 and 49.92, respectively, as a junior.

Ochitwa doesn’t move as far into the distance freestyles as her other two classmates above. She makes up for that though by having very good secondary and tertiary strokes as well: she goes 54.48 in the 100 back and 1:58.18 in the 200 back, plus a 54.74 in the 100 fly for good measure.

Where do these three swimmers fit in to Arizona’s future? That’s a question not easily answered without looking at their other three commits: Sam Senczyszyn, MacKenzie Rumrill, and Quinn Carrozza.

After that, Arizona coaches have some options with this class over the long-term. Carrozza, Ochitwa, Shimomura, and McCarthy are all great freestylers, and Ochitwa and Carrozza are great backstrokers.

Arizona will have a year, at least, to sort it all out – their great backstroker Bonnie Brandon and breaststroker Emma Schoettmer will be around when this class enters Arizona, to provide a year of veteran leadership before this class is handed the keys.

What’s more, everyone in this class really can swim freestyle – and with 75% of all of their free relays graduating from last season, replenishing those ranks will be an immediate need – and one that Arizona has targeted with great success.

The fun might not be done yet in Tucson. Two of the best sprinters in the class, Victoria Toris and Amy Bilquist, are planning trips to Arizona. If both of them were land in Rick DeMont’s pool, then the Wildcats might have an insurmountable lead for number-one class.

What effect would Bilquist and Toris at this point even have if they went to Zona?

Abbey weitzeil is planning a trip to Zona as well