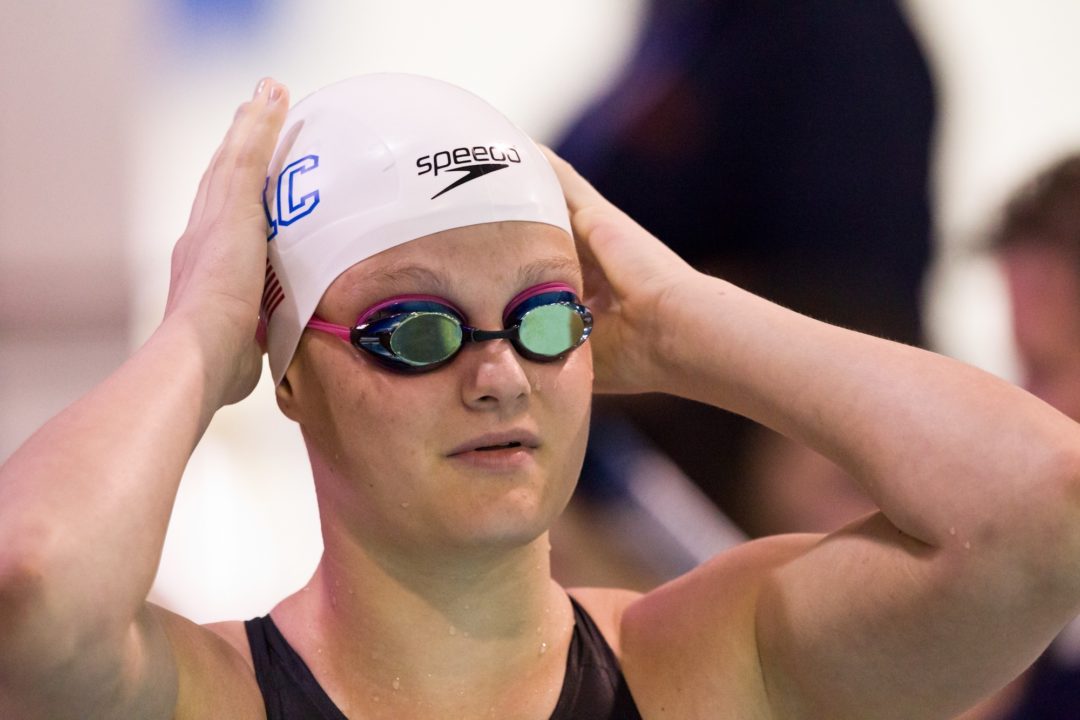 North Baltimore's Cierra Runge will be one of the stars of this week's Junior National Championships (Photo Courtesy: ©Tim Binning/TheSwimPictures.com)

After a splendid U.S. Open Championship meet in Indianapolis last week, the IUPUI Natatorium will play host to the Junior Nationals this week.

It might seem as though all of the great junior performances were burned-up last week, and there were many of them. But the depth of the 18-and-under ranks in the United States is so great that there’s still plenty of great action to watch.

Here’s some of the names to keep an eye on at this meet:

Celina Li – Li is one of the big-name holdovers from the U.S. Open, and will hang around for a second week of competition. She’ll swim mostly the same schedule, including her specialties the 200 and 400 IM’s (she finaled at the Olympic Trials in the 200), and the 100/200 butterflies. This time, though, she’ll drop her dabbling in breaststroke for a shot at the 200 free. That’s actually kind of an exciting entry for her. Her best time of a 2:05.50 is from when she was only 15 in 2010. In that same time period, she’s dropped three seconds in her 200 IM. If she can swim a 2:02, her recruiting stock (she’s headed into her senior year of high school) would skyrocket.

Justin Lynch – Lynch, from the Terrapins Swim Team, is the top seed in the boys’ 100 fly, despite being only 15 years old. The 13-14 National Age Group Record holder in the race was a 53.7 at Trials, and now is within a second of Michael Phelps’ 15-16 record of 52.98. Can Lynch drop that time and get to the mark on his second taper of the summer? It would be a tall test. But if he can chip away another tenth-or-two, he would have his sights locked-in headed toward the summer of 2013.

Gillian Ryan – In the summer of 2011, Ryan pulled off a surprise National Championship win in the women’s 800 free at only 15. She’s since moved to train with the North Baltimore Aquatic Club along with her coach (think Phelps, Bowman, and crew), but that hasn’t paid off this summer with any time improvement in that race. Her 400, however, made a huge leap at the Olympic Trials where she went a 4:07: a best time by two seconds.

Cierra Runge, Faith Johnson, Julia Anderson, Mary Schneider, and Lindsey Engel – This is a great group of young sprinters – something the Americans really need to develop. Anderson is more of a 100-200 swimmer, as is Runge, but in the 100, these 5 young ladies will square-off for the National Title. Watch this race to see a potential development of the 2020 Olympic relay; Runge is the only one seeded under 56 seconds, but don’t be surprised if more crack that barrier at this meet. It’s unlikely that all of them will become Olympians, but with so many young talents, the long-term hopes of the American women’s sprint group is bright.

Quinn Carrozza – Carrozza is very Missy-Franklin-like as a very good 200 backstroker and 200 freestyler, with her 100’s continuing to develop. She’s got a 1:59.1 in the 200 free, and if she can knock even a few tenths off of that time, the Nitro 15-year old could be on track for a relay spot at the 2013 World Championships. Runge and Anderson will be hoping for 1:58’s as well.

Allie Szekely – Szekely had one of the more memorable, non-victory moments of the 2012 Olympic Trials. Swimming in a veritably-ancient FSII suit, she won a 17th-place swim-off in the 200 breast. Since then, she’s shown awesome versatility in the backstroke, fly, and especially IM races. The 14-year old is a huge favorite in the 200 breaststroke, though in the 100 she’ll get a good push from Plymouth’s Miranda Tucker.

Ella Eastin – Eastin is only 15, and has just one season of high school swimming under her belt. However, that one season was one of the most dominant ever seen in Division 3 of the California Southern Section, where she crushed two division records. Despite her age, Eastin is already a powerful swimmer, who specializes in the IM’s and the backstrokes.

Interesting meet to follow. Agree with you about the swimmers to watch. I also want to see the young american sprinters on the men’s side with Santo Condorelli and Caeleb Dressel. The young backstrokers on the women’s side are very promising. There’s the very young Isabella Rongione too. But for me it’s all about Allie Szekely. I’m happy to watch her live this week on my computer. I hope somebody has bought her a modern suit. She’s a phenom.

too bad, they will be the only 2 swimmers from the bolles school

Why is half the Jr Pan Pac roster competing in the meet this week? Jr Pan Pacs are next week, and the meet with the American flag on the cap should be the priority. That’s why they picked the team at Trials and not US Open or Juniors.

Eastin goes up and down, the real good swimmer is K Mclaughlin one of the few Mission Viejo kids that isn’t made into a mid distance and distance freestyler. I think Mclaughlin is better than Eastin and Engel.