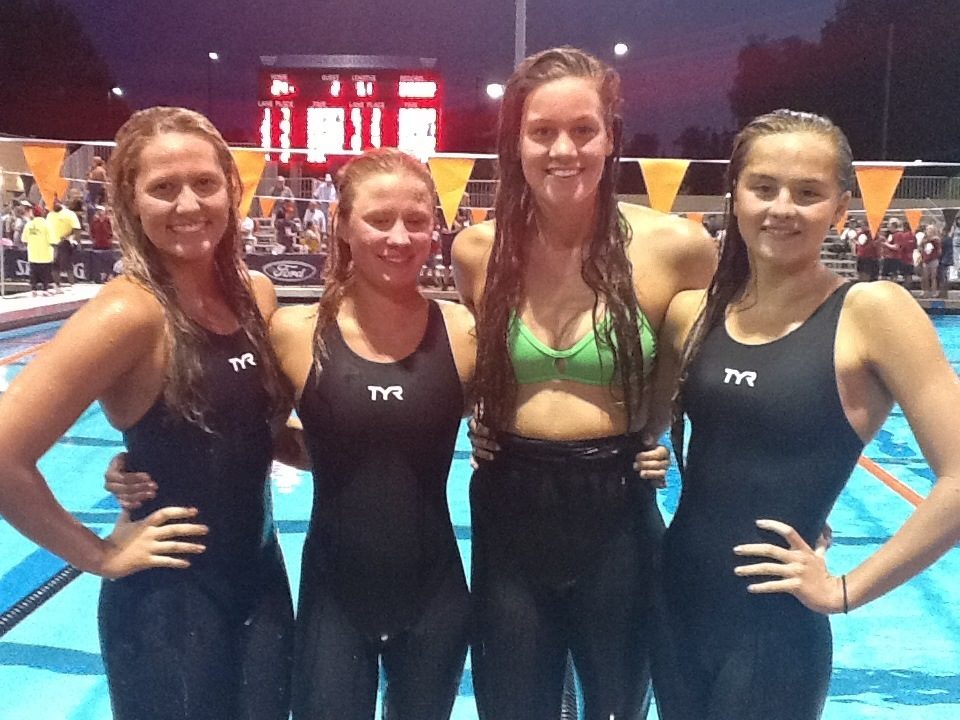 In the final meet of the 2013 California Southern Section Championships, specifically the biggest, Division 1 schools, the team from JSerra High broke a National High School Record in the women’s 400 free relay with their meet-ending, five-second margin of victory.

The team of Kaitlyn Albertoli, Karli Thuen, Rebecca Millard, and Katie McLaughlin broke the Public School and Overall National Records by combining for a 3:21.20. The old overall record was set earlier this year by Germantown Academy in 3:21.63, which was also the independent school record. The Public School Record remains at a 3:22.85 set in 2011 by Hershey High in Pennsylvania.

That relay has terrifying potential; three of the four swimmers are just sophomores, with Millard being the lone swimmer who will graduate this relay.

Katie McLaughlin’s anchor was pretty amazing for a swimmer so young, and she was arguably the swimmer of the meet after breaking a 32-year old Division 1 Record in the 200 free with a 1:45.39, and also breaking the Division Record with a 52.93 win in the 100 fly.

I repeat again here on swimswam Katie McLaughlin is a star in the making.

I repeat again here on swimswam Katie McLaughlin is a star in the making.
Well, her and Eastin in Division 3 are going to be good in college. Weitzel was pretty impressive, hearing about Engel’s time pushed her and she topped them in both the 50 and 100. Both Weitzel and Engel will be use on free relays in college. Gornay on the boys or young men races is great in fly and back, also will be really good in college.

Millard has on what appears to be some kind of a bikini top or sports bra, is it legal to wear one under the regular suit?

Some swimmers put them on to take pressure off their shoulders from the suit straps without changing suits completely. They dont wear them when racing.