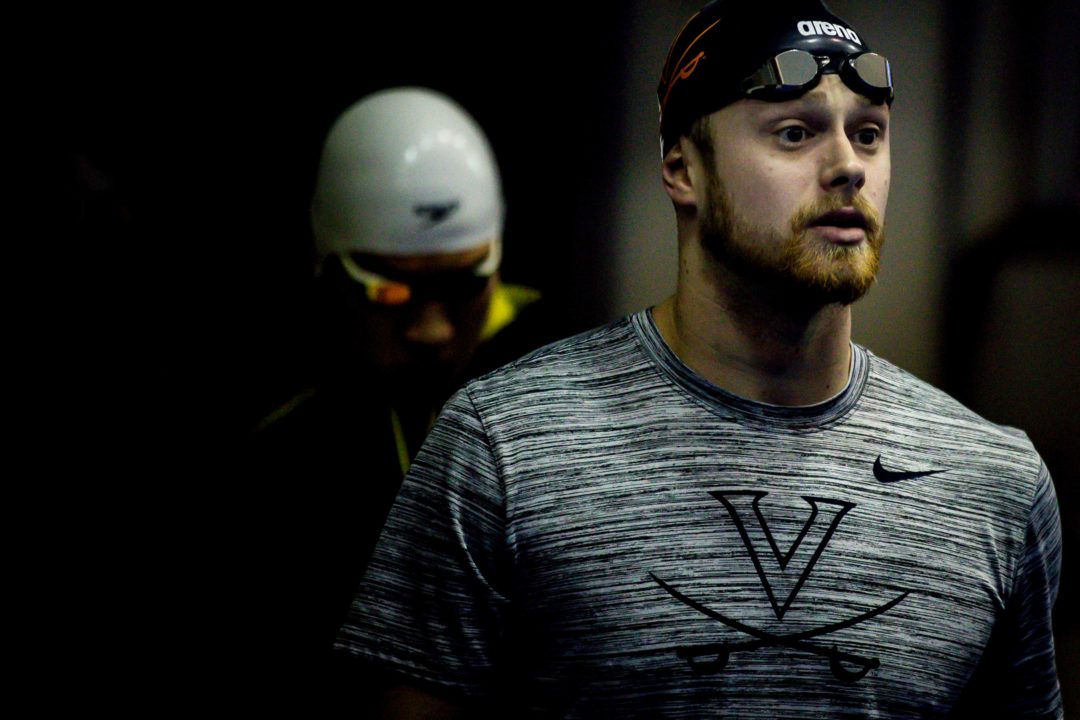 PRVT, which includes pros, post-grads, and a handful of swimmers deferring the start of their college careers because of the pandemic, is led by Lopez, who is also the head coach at Virginia Tech.

Conger had been training as part of a very-small post-grad group at the University of Virginia since late 2018. After his departure, Catie DeLoof is the only pro training in Charlottesville – she moved there in August.

At Virginia Tech, he’ll be reunited with his former University of Texas teammate, and NCAA butterfly rival, Joseph Schooling.

The group has assembled a deep roster of butterfly talent, including Farida Osman and Hokie undergraduate Youssef Ramadan: the fastest freshman 100 butterflier in NCAA history.

The 26-year old Conger was a member of the U.S. Olympic Team in 2016, where he won a gold medal as a prelims leg on the American 800 free relay. His 1:45.73 split on that relay was the Americans’ fastest prelims leg.

He is also the current fastest man ever in the 200 yard butterfly thanks to a 1:37.35 he swam to win the 2017 NCAA Championship in the event.

As a collegiate swimmer at the University of Texas, he was a 10-time NCAA Champion, including the 1 individual title in the 200 fly.

Next week’s ISCA International Senior Cup is expected to be Conger’s first meet since moving his training base. A number of his PRVT teammates will be racing there as well.

That is an amazingly fast group of flyers at VT. Schooling, Conger, Osman, Ramanden, Manoff, and Ivanoni are all international level talents.

Switching up training groups with a few months to go before trials is pretty bold. Hope it works out for him

Bold play Cotton, let’s see how it works out for him.

It always made me angry that he wasn’t on the finals relay. Instead we had Lochte split 1:46. They still won the gold, but he is a clutch swimmer who couldve given them a shot at the WR

Agreed. Conger earned a finals slot. Lochte was handed it based on “rep”. Hopefully it fuels Conger to greater heights this time round. rooting for him

Behave.
Lochte was faster in prelims.
Conger should of been on the final team but they let Phelps swim to boost his medal count. Phelps hadn’t been faster than 1.48 since 2012.
Lochte was 1.45 in 2015 and out split conger by 0.2 in the heat relay, how were the US coaches to know a proven vet like Lochte would go slower in the final.
He was on that team every year from 2004.
Phelps or Conger was the choice and Bowman had the say, hating ok Lochte is low. Bowman’s ego why Conger got dropped.

But I guess you aren’t about to let the facts get in the way of your argument!

I think he is correct. USA swimming subtracts relays reaction times so people don’t push it too much to get a faster time to earn the spot in finals. Lochte was faster when you do this. Whether or not they should do this is debatable, but they do.

FYI: Lochte actually “swam” faster. When they compare splits, they remove the relay exchange — so as to not encourage the prelim swimmer so go max-risk on the exchange to improve their split time and thereby risk DQ’ing the relay.

We just gonna ignore the fact that MP ended up splitting 1:45.2?

Yes because that doesn’t prove their point

It’s not great is it. Ok it’s faster than Lochte swam, yet you can’t know that before hand.
Basically Bowman had no faith in Conger going 1.44 which I think he would gone given the chance.

Just because MP did in fact split a fast time, it doesn’t mean that the actual decision making process was a good one.

This actually sets a dangerous precedent, where it doesn’t matter who earned their spot on the finals through times, coaches are still gonna choose who they have ‘faith’ in… Sounds a little messed up to me

doubting the GOAT is a pointless exercise

This didn’t “set” a precedent. It has always been the coaches’ discretion. You can find plenty of examples over the years like this. Anyone remember Gary Hall being upset in 2004 about being left of the finals relay?

who couldve given them a shot at the WR

I’m not sure I agree that he’s really proven that he is a clutch swimmer. Can you name an example where he had to raise his game up under pressure?