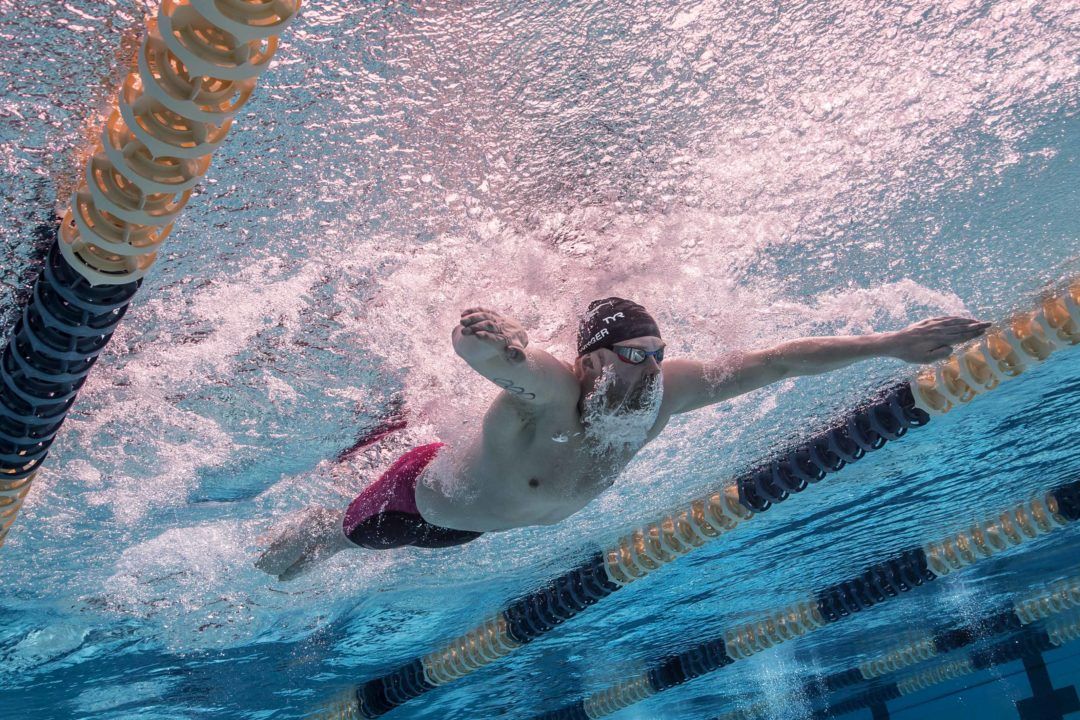 Conger grew up about 2-and-a-half hours from Charlottesville. He's been named a member of the 2018 and 2019 US World Championship teams.

American swimmer Jack Conger is heading home, or at least closer to home, to join the new post-graduate training group at the University of Virginia. Conger is the first external post-grad to train at Virginia under 2nd year head coach Todd DeSorbo.

Conger was born and raised in Rockville, Maryland, which is about a 2-and-a-half hour drive from Charlottesville.

Virginia coaches say that they’re being very selective about who they are allowing into their post-graduate group, and will intentionally keep it limited to just a few non-Virginia post grads.

Conger won a gold medal as a prelims-only swimmer on the men’s 800 free relay at the 2016 Olympic Games. The 24-year old finished his collegiate eligibility at the University of Texas with the 2017 NCAA Championships. His college career included 17 All-America honors, 14 Big 12 titles, and 9 NCAA titles. That includes a win in the 200 fly, which was also an NCAA, American, and US Open Record (in other words, the fastest time ever). He’s continued training at Texas as a post-grad until now.

“The past five years swimming for Texas have been the best years of my life,” Conger told SwimSwam. “I will always cherish my time swimming for Eddie, Kris, and Wyatt. Now, I am ready to start the next chapter of my professional career in Charlottesville. I can’t wait to be a part of what Todd and Tyler are building at Virginia.”

While swimming high school in the DC area, Conger was primarily a backstroker and 500 freestyler, breaking National High School Records in the 100 free and 500 free. In college, though, he developed into more of a butterflier, and his focus freestyle distance became the 200.

At the 2018 US National Championships, Conger’s results were:

DeSorbo will be Conger’s primary coach, though the entire Virginia staff will be involved in his training.

Strange move. Conger has better people to train with at TX and Eddie has obviously done a tremendous job with him. Todd training 200 flyers is not his specialty and he is unproven in this area. I get the need for change but Conger won’t have the training group or a middle distance coach anywhere near as proven as Eddie.

agree.
after six+ years under eddie, jack needs a change perhaps? maybe the change should come earlier….the time (next summer) will show.

less than 2yrs to go, full bottle of gatorade, dark goggles on – hit it!
my horse jack!

Probably represents a need for change in training style moreso than a statement of Eddie and DeSorbo’s respective expertise. I don’t think anybody would argue DeSorbo is a better mid-distance or fly coach than Eddie, but a completely new environment and different regimen might be exactly what Conger needs.

80
0
Reply
Swimmer A
Reply to  swimming

I had heard a rumor that the relationship between Jack and Eddie became stressed, and when things came to a head, Eddie said something to the effect of “if you don’t want to be here you can leave.” And I guess that finally happened.

Either way, I think it’s good for Jack. Some times you gotta change things up in your life.