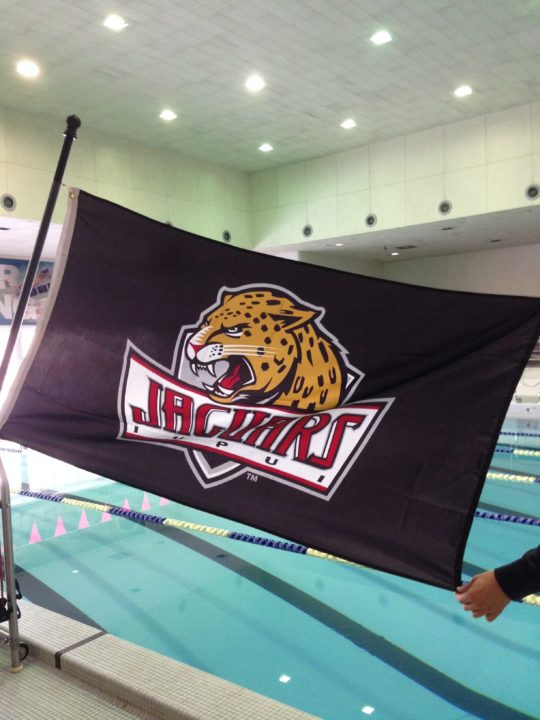 Oakland University traveled south to Indianapolis to take on their former conference rival, the IUPUI Jaguars. The Golden Grizzlies joined...

Oakland University traveled south to Indianapolis to take on their former conference rival, the IUPUI Jaguars. The Golden Grizzlies joined the Horizon League for the 2013-2014 season, after dominating the Summit League for the past decade. The former Summit League rivals met on Saturday for the first time as members of separate conferences.

The Oakland men defeated IUPUI 192-106, winning all but three events. The real story, however, was the women’s meet. The IUPUI women defeated Oakland for the first time in program history with a score of 153-144. The Jaguars also honored their two graduating seniors, V Brown and Andrew Saunders. Click here to view the meet results.

The 200 medley had the Jaguars off to a strong start. The team of Lexi Laird, Jenny Oleksiak, Maranda Buha, and V Brown won the event with a time of 1:47.34, touching out Oakland’s A relay by .01.

The Oakland women responded with a 1-2 finish in the 1000 freestyle. Patricia Aschan won with a time of 10:25.02 followed by Nichole Contesti at 10:37.35. Natalie Trout finished third for the Jaguars.

The back-and-forth action continued as the swimmers dove into the 200 freestyle. Margret Barber and Maddie Bradford led IUPUI to a 1-2 finish, touching the wall at 1:55.95 and 1:56.46, respectively. Grace Waller was third for the Golden Grizzlies.

The Jaguars were holding on to a strong lead, but Oakland made a big leap after a 1-2-3 finish in the 50 butterfly, led by a 26.60 from Julia Vela with her second win of the meet. Oakland’s Tricia Grant also won both the 1m and 3m diving events.

Patricia Aschan (59.29) touched out IUPUI’s Jenny Oleksiak (59.43) to win the 100 IM. Leading into the final relay of the meet, IUPUI maintained a five point lead. The winner of the final 200 freestyle relay was going to win the meet.

IUPUI’s relay team of Lexi Laird, V Brown, Maranda Buha, and Madison Taylor touched out Oakland to win the meet with a time of 1:37.50. Oakland’s A relay finished second at 1:37.62.

Oakland was last year’s Summit League Champion on both the men’s and women’s side of the meet. The IUPUI women were runner-ups, and were selected to finish second at this year’s Summit League Championships. Denver was welcomed into the Summit League this season and is the favorite leading into the meet. The IUPUI women’s swim team is very strong this year, despite their small roster size of 13 women. The change of culture for the IUPUI men and women have helped the team improve dramatically over the last three seasons.

On the men’s side of the meet. The Oakland men had control of the meet from the first event.

The IUPUI men were also predicted to be Summit League runner-ups this year behind Denver. With a majority of the individual event winners coming from Oakland last season, several teams are hoping to be able to sneak into those A and B finals at conference. Although IUPUI has seen a handful of injuries this season, they are still expected to be very competitive at the Championship Meet. One of the top scorers at last years conference meet, Tony Carroll, has been recovering from an illness for the past month and a half, and hasn’t been competing this semester. The IUPUI coaching staff told SwimSwam that they have a plan in place and expect him to be ready to race again at the Summit League Championships.