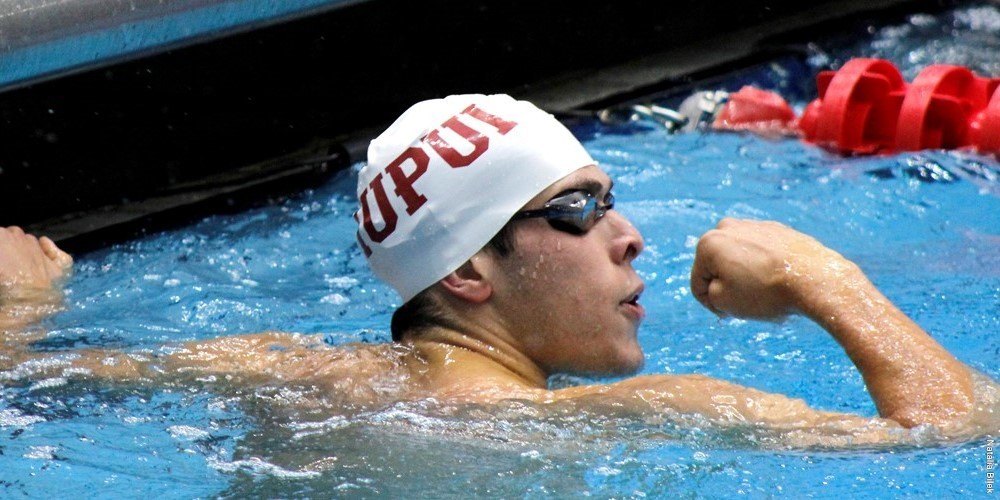 IUPUI swimming and diving started its season off with wins by both the men and women on Thursday night (Oct. 5) at the Natatorium over the University of Indianapolis. Current photo via IUPUI Athletics

IUPUI swimming and diving started its season off with wins by both the men and women on Thursday night (Oct. 5) at the Natatorium over the University of Indianapolis. The men won their meet 149-90, while the women won by a score of 129.5-113.5.

Other wins on the men’s side came from Vince Partlow, who swam the 50 yard freestyle in 21.36, Mark Auger won the 200 yard butterfly with a time of 1:53.04, and Jonathan Stollertaking first in the 200 yard breaststroke clocking a time of 2:08.27. The team of Jackson Sandala, Josh Barajas, Levart and Partlow also took first in the men’s 400 freestyle relay (3:05.69) to close the night.

The next time the Jags will be in the pool will be on Friday, Oct. 20 for a home dual meet against Oakland starting a 6 p.m.

The UIndy swimming & diving teams kicked off the 2017-18 season Thursday night, making the short trek downtown to take on IUPUI at the Natatorium. The Greyhound women were edged, 129.5-113.5, while the men lost by a 149-90 final.

The Greyhounds garnered 12 event wins on the night, including five individual and two relay victories on the women’s side.

“I’m very happy with the performances for our first meet,” said Head Coach Jason Hite. “We had some big wins on the women’s side and battled really well against a team that almost doubled our score a year ago. We saw serious progress for the women.

“One the men’s side, we had solid wins from a couple of the guys and from our medley relay. The meet wasn’t as close as we hoped, but overall it was a good first step on our season.”

Freshman Krystal Caylor had a stellar debut in her first-ever collegiate meet. The Springfield, Mo., native earned a pair of individual wins while helping the Hounds to a victory in the 400 freestyle relay. She posted the program’s fourth-fastest 200 IM time at 2:06.84, recorded a 52.57 in the 100 free, and swam the leadoff leg ahead of Mary Niklarz, Stefanie Haholiades and Malvina Shoukri for a winning time of 3:34.09 in the 400 free relay.

The Greyhounds also won the 200 medley relay, as Leger, Konstantinidi, Sotia Neophytou and Haholiades combined for a 1:47.90.

Berti also combined efforts with sophomore Ante Lucev and freshmen Jan Zuchowicz and Victor Antonon for a winning time of 1:32.59 in the 200 medley relay.

The Greyhounds get right back in the pool when they host Division I Cincinnati Friday, Oct. 6. A free video stream of the meet will be available on the GLVC Sport Network.