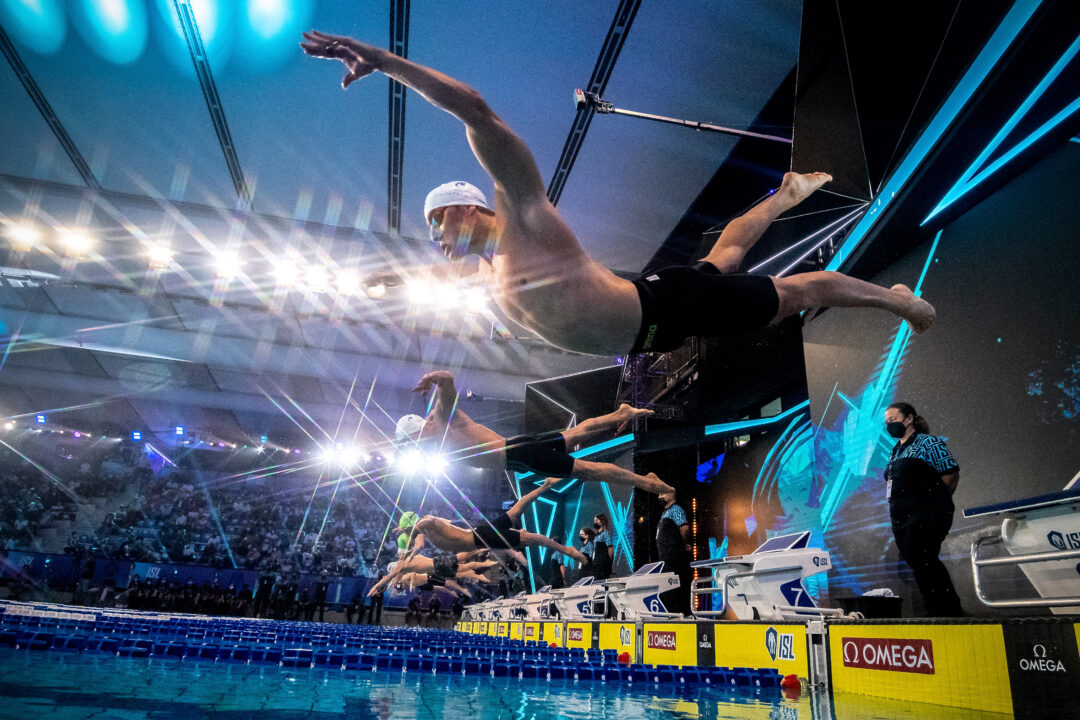 The ISL has reacted to the "surprise" news of the 2022 World Championships by offering additional financial support for athletes' travel expenses. Stock photo via Giorgio Scala / Deepbluemedia / Insidefoto

The International Swimming League (ISL) has responded to the abrupt announcement of the 2022 World Championships.

One of many parties caught off guard by the news was the ISL, as evidenced by a statement released Wednesday.

The league wanted to directly address the swimming community, understanding the constant scheduling changes of late put many of them in a difficult spot.

“Following surprise announcements made recently that change the global swimming competition calendar, the ISL would like to address the members of the swimming community – swimmers, coaches, federation members etc. – as we understand that these announcements put many of them in a difficult position due to changing plans and calendar clashes,” the ISL statement reads.

The league goes on to lament that its Season 4 schedule was deliberately put together in an effort to avoid clashes with the Commonwealth Games, Asian Games, European Championships, and the now-postponed World Championships in Fukuoka.

“This is the primary reason why we have offered swimmers the choice between PRO and Semi-PRO status, which provides additional flexibility and helps manage the various events of the year,” the league said. (Read more on the ”pro’ and ‘semi-pro’ rules here.)

But now, the new World Championship dates in Budapest directly conflict with three ISL matches early in the regular season. There is also a new Pro Swim Series event in Mission Viejo that conflicts with the first match of the season. See below:

Note: Pool swimming traditionally occurs during the second week of the FINA World Championships, which would likely be in the vicinity of June 26-July 3.

Due to the scheduling conflicts, the ISL is now offering athletes increased financial support to help them travel where they need to be on time while missing as little ISL as possible.

“Furthermore, in recognition of the added difficulty that comes with navigating potential calendar clashes, the League is proud to increase its support for swimmers competing in the ISL – e.g., with additional travel expenses allowances, etc., to ensure that swimmers can be in the right place, at the right time, with minimum disruption,” the ISL said.

SwimSwam asked the ISL to elaborate on what they meant by additional travel expenses, and what else might be included, but a league spokesperson said that they were not prepared to share that information.

The last time the league offered extra payments to deal with changes to the global swimming calendar—the solidarity payments that came in 2020 amidst the pandemic—they were not delivered on the promised schedule.

“Ultimately, the League is delighted that swimmers have increased opportunities to compete this summer, as the ISL’s goal has always been to provide more opportunities to the swimming community. Having more choice is always a positive.

“We look forward to a summer full of incredible performances from athletes, in the ISL Season 4 and elsewhere!”

I just think that less is more. My favorite season so far was the first one. Less matches and only 8 teams.
So many matches and 10 teams really hurt the format (at least for now) in my opinion

This doesn’t seem like a battle that ISL can win. They really should just shorten the season again (I don’t think such a long season is a good idea anyway).

No one expects ISL swimmers to do fast swimming in-season. It’s just for pure racing and entertainment purposes. NBA, NFL, NHL and other big league players aren’t in the shape of their life for the whole season. They just play and get more ready and rested for the final. Same in ISL. Makes sense to me.

For what it is worth, I think pool swimming at Worlds this year is June 18-25th. Good source!

Wouldn’t it make more sense to just change the dates/decrease the number of matches?

That would be ceding territory to FINA, and I don’t think that’s in the ISL’s ethos.

But if they don’t find a solution, I’m not sure that first block is going to go well.

Hopefully this is just posturing to see if they can get a reaction, with the willingness to ultimately change if they have to.

How much leverage do you think the ISL has in this situation? Will FINA react in any substantive way to this?

My perception is that they have absolutely zero leverage here, but I’d be interested to hear if you feel any different Braden – you’ve got a better idea of the behind the scenes dynamic than anyone here

I don’t think they have much. Their only leverage is to continue to dump money onto it. Eventually they’ll hit a value-point where athletes will choose ISL over Worlds – though maybe even then, only the short-sighted ones, because if athletes keep burning their federations, that training support might dry up.

ISL has some leverage via their lawsuit, I guess, in which most legal experts agree they have the upper hand. If they really wanted to push FINA to move the whole meet, they could maybe offer that as a bargaining chip. But I don’t see that happening.

I don’t think Worlds was the only thing that was going to make that first block a hard sell to athletes. But,… Read more »

“Due to the scheduling conflicts, the ISL is now offering athletes increased financial support to help them travel where they need to be on time while missing as little ISL as possible.”

Does this imply that the ISL doesn’t pay for their travel to and from meets?

Yeah those dates are unrealistic. Swimmers will be on world taper/ at worlds so surly the only option is to change the ISL dates unless you want matches exclusively for swimmers who did not qualify for worlds thus dramatically dropping the quality of racing.