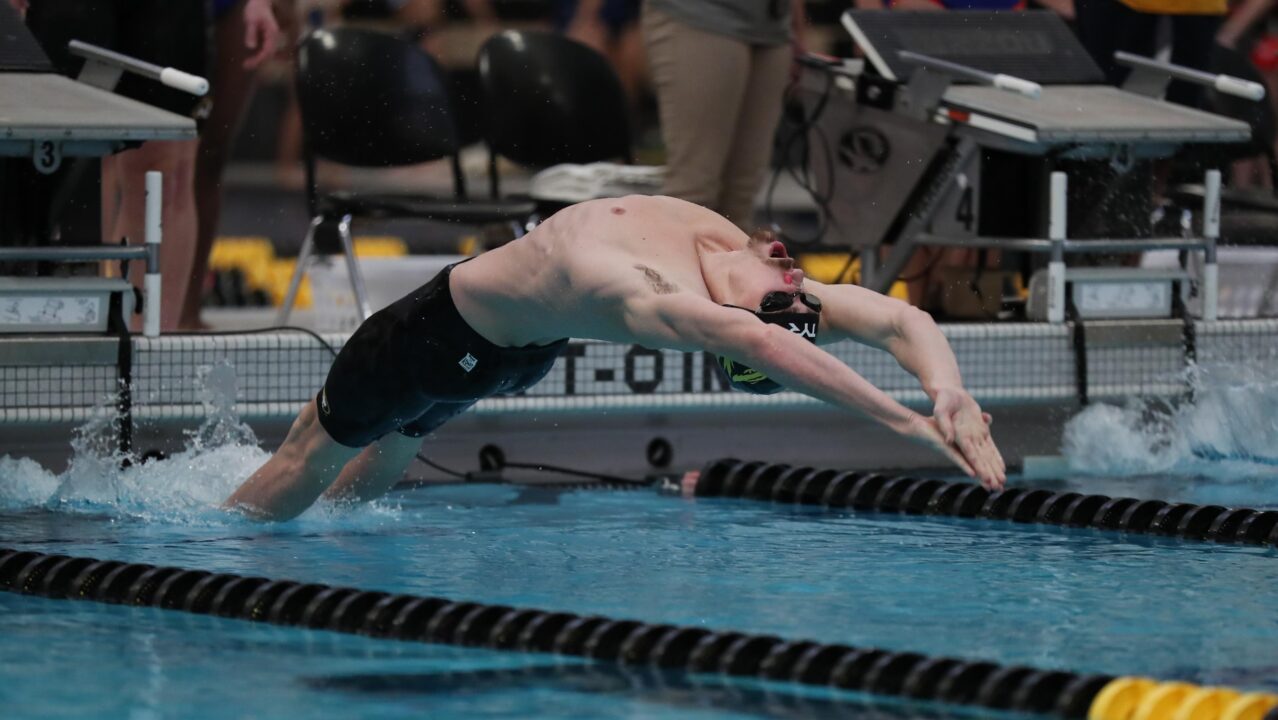 Missouri's Jack Dahlgren has had a breakthrough season for the Tigers, and he'll swim the 100 back, 200 back, and 200 free at the SEC Championships. Archive photo via Missouri Athletics

The SEC has released its pre-cut psych sheets for the 2022 conference championship meet, which will be hosted by Tennessee from February 15-19.

As is tradition in the nation’s deepest swimming conference, the psych sheets provide as little information to the public as possible, with swimmers intentionally over-entered in races they’re not going to swim.

Florida, historically the worst offender of over-entering, has maintained that status by entering NCAA Record holder Kieran Smith in 9 events (including the 200 fly and 100 free, which he hasn’t raced yet this season).

The Missouri Tigers historically are one of the few teams that have been truer-to-expectations on these entries, and they have given us some of the few valuable nuggets that can be gleaned from them.

Dahlgren has been on a tear this season, swimming multiple best times in multiple events at multiple meets, including new personal bests at dual meets or other non-taper events. He has been a best time in the 100 free at four different meets this season (and, in fact, in four straight flat-start 100 free swims).

Last year, he ranked 4th for the Tigers at SECs by scoring 58 individual points; this year, that total projects to be over 80.

While not a huge surprise, given that this is his regular event lineup at big meets, he’s good enough in the 100 fly to at least give the Missouri coaches a reason to think about it.

The only other swimmer ranked in the top 10 in an event in the conference this season who is not entered in that event is Tennessee’s star freshman Ellen Walshe.

While she does have a healthy event lineup of 5 possible races, the 200 free, where she is the third-best swimmer in the SEC so far this season.

SEC teams are allowed to enter 22 athletes at the SEC Championships, with swimmers and divers counting as the same number of athletes. Each athlete can swim a maximum of 7 total events, with no more than 3 of those being individual events.

At the conference level, it rarely makes sense, from a points perspective, for an athlete to swim 5 relays and 2 individual events, so most swimmers will compete in 3 individual races.

Teams have until before each prelims session to make scratches.

Where is Gerry Quinn though? He swam at midseason and was pretty close to his PBs. If he’s not with Florida at NCs, that’s a hit to the relays at the very least.

I mean is it? Medleys are

I guess the 800 might be marginally worse, but UF will be fine

My guess is Mestre over Cancel

Can I speak to a manager?

My guess will be the 2free and 2IM (his WJ events) and maybe 2fly… all on different days. Exited to see him start his college swimming career …

Some tough decisions to be made in Knoxville for the Lady Vols. 40 athletes entered, 5 divers and 35 swimmers. I’m not really familiar with all of our divers, but of the 35 swimmers 25 are projected to score before scratches.

Likely some familiar names left on the bench :/ I guess a good problem to have, but still a bummer!

It is the downside to having a large and deep team. There are going to be some tough meetings held over the next few days, particularly on the women’s side. Heartbreaking for those that don’t make the cut, especially since the meet is in Knoxville. Non-SEC team swimmers will not be allowed on deck and don’t get to go to team hotel or celebrate on deck ( fingers crossed!).

Enough about swimming, tell us where the Fortnite clash between Florida and NC State is being streamed. Give the people what they want!

I miss when auburn was really good

Same. But there’s confidence Wocho get can the program back. He knew what it took to get Auburn to where they were, and his results after only 1 year are promising.

hosted by Auburn? Or Tennessee?

I commented on the wrong thing…ugh