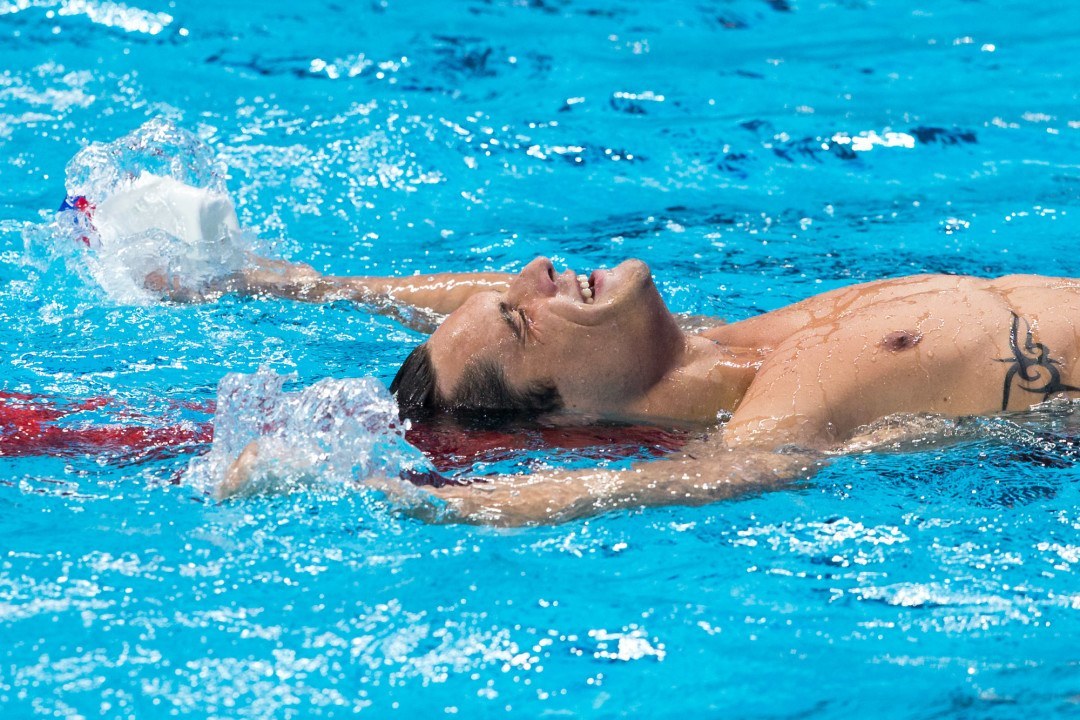 Just when you thought it was safe to start your next training block, FINA has other plans, inserting a 2022 World Championships meet in Budapest now. Archive photo via Tim Binning/TheSwimPictures.com

Just when we thought the elite international swimming competition schedule was gelling into place after the postponement of this year’s FINA World Championships in Fukuoka, Japan, another major shakeup has been announced.

Today FINA revealed that an edition of the 2022 FINA World Aquatic Championships is indeed back on the calendar but this time for Budapest.

“The agreement ensures athletes have a global aquatics championship to target in the summer of 2022. The agreement was reached after approval from the FINA Bureau today.”

“As an aquatics community, we are finding solutions around the pandemic and today’s announcement is an important step in this process,” FINA President Husain Al-Musallam said.

“We know we need to be imaginative in our approach in navigating through the current health crisis for our athletes. Today’s agreement is a testament to this work. FINA also recognises that the pandemic is evolving differently according to time and place. We are extremely fortunate to have event hosts that share our passion for aquatics and have the willingness, capability and flexibility to organise FINA’s most prestigious event. We are deeply grateful to all our hosts and know that aquatics athletes feel the same way.”

“With four FINA World Championships and the Paris 2024 Olympic Games over the next four years, we are maximising the racing opportunities and earnings potential for established and emerging aquatics athletes alike,” FINA President Al-Musallam added.

This will be the first FINA World Championships in a couple of decades that does not involve the creation of temporary pools, according to a February 7 press conference on the announcement. The World Championships is instead meant to support athletes and create a competitive environment, rather than involve a great expenditure of money, officials said.

FINA reportedly agreed to exempt the 2022 competition from having a 10,000 swimming capacity, and there is currently no high-dive discipline for cost-saving purposes, though FINA is allegedly still looking for a venue for that competition. In addition, sports will be spread throughout Budapest and into surrounding cities, including artistic swimming events in Margaret Island and Szechy pool; and water polo events in Margaret Island, Szeged, Sopron, and Debrechen. Swimming and diving will take place at Duna Arena, and open water swimming will take place at Lake Lupa.

This inserted edition of the World Championships now forces federations to revise their training blocks once again, as their target meets and training schedules were already now geared towards Fukuoka next year as the next Worlds meet.

Additionally, 2022 Budapest now overlaps with the new International Swimming League season 4, whose schedule of competitions is set to span June through December.

The insertion of this meet also means we are set to see a World Championships now in 3 consecutive years: 2022 Budapest, 2023 Fukuoka, 2024 Doha.

Finally, those in the Commonwealth Games and European Championships realms may see their hectic summer break down like this:

Look for further analysis posts on what these Championships may mean to the global competitive landscape as we unfold its impact.

Budapest did an amazing job last time they hosted. Maybe better to just let the host it the next few years. It would certainly make it more cost effective. Ditto for Olympics. Do 3 or 4 consecutive Olympics in the same city. Better than having abandoned, graffiti filled venues a year later and city swimming in crushing debt.

” amazing job last time ”
well. other than spending billions of dollars on a pool that cost maybe a 100 million and an opening ceremony for a few millions that no one watched and having 0 ventilation whereby baking and steaming the top half of the viewing area and keeping the lower third rows EMPTY through the whole event, other than all that, amazing

Severe cost overruns just happen to be the business model of FINA so that’s a success in their book.

I feel like the race in the Women’s 1500 Freestyle is going to be a heated one. I’m gonna say it now, but I think that we will see 3 women under 15:40 (the great Ledecky, healthy Quadarella, and youngster Katie Grimes).

Seeing that 2027 hosts Budapest have stepped forward for this summer, the sensible thing to do would be to move Doha to Nov 2025 instead of Jan 24 and push Kazan to 2027.

Everyone gets to host a world championship as promised and it eliminates the farcical WC six months before a Paris Olympics.

This would be too reasonable for FINA.

This is literally the most inconvenient time possible to choose. I hope the Aussies prioritise Comm Games anyway. Three worlds in a year and a half definitely diminishes their value.

Prime Minister Orban has been one of the most forward-thinking and supportive politicians in the world. In the last 10 years alone, Budapest has become one of an elite number of cities who can get the job done – no matter how big or small! Brava Pannonia Sacra!

So because he’s willing to throw millions of his citizens’ money at mickey mouse swim meets, and they’re not allowed to speak up in protest of it, you think he’s “forward-thinking”?

Pick up a newspaper, Mike. Or are those being banned in Texas now too?

you are clueless. Orban is a ruthless dictator with human rights violations comparable to China. Budapest has been deteriorating since the regime changes

Excuse me, but what you two are talking about – Orban being dictator, human rights,etc. – is a textbook example of being brainwashed by the left. I live in Hungary and it sounds like you talk about North Korea here.
People of Hungary voted Fidesz (governing party) 3 times in a row for a reason. We are freely did that, no one forced us. You make it sound like we are not free anymore, but the truth is quite the opposite. Not only we have multiple parties (and by multiple I mean dozens and not just 2 khm..khmm..) but also these votes are always as clean as possible. No issue has been reported by any organization. Not only these… Read more »

This is going to be a long comment, as lies can’t be left unanswered.
Plus, everything is related to swimming, as it is one of the most prestigious sports in Hungary. Unfortunately politics and sports are hand in hand walking together in my country, so it is impossible to separate them.

The comment above draws a perfect picture and a “textbook example” in regards how brainwashed average Hungarian sportsfans are, by our government propaganda.

You can see many of these kind of defending comments when it comes to sports events, sports’ structure, etc in Hungary, as Sports in general became a propaganda channel in the past 12 years. Anyone in sports right now (doesn’t… Read more »

Guys! I am Hungarian and what you read about Orban and the democracy in Hungary is let’s just say not factual. @Mod: is this ok to say?

it will be after the Hungarian elections

Ally McHugh is gonna dominate the 800 Freestyle! Can’t wait to watch her, she’s such a hard worker and is such a good back half swimmer