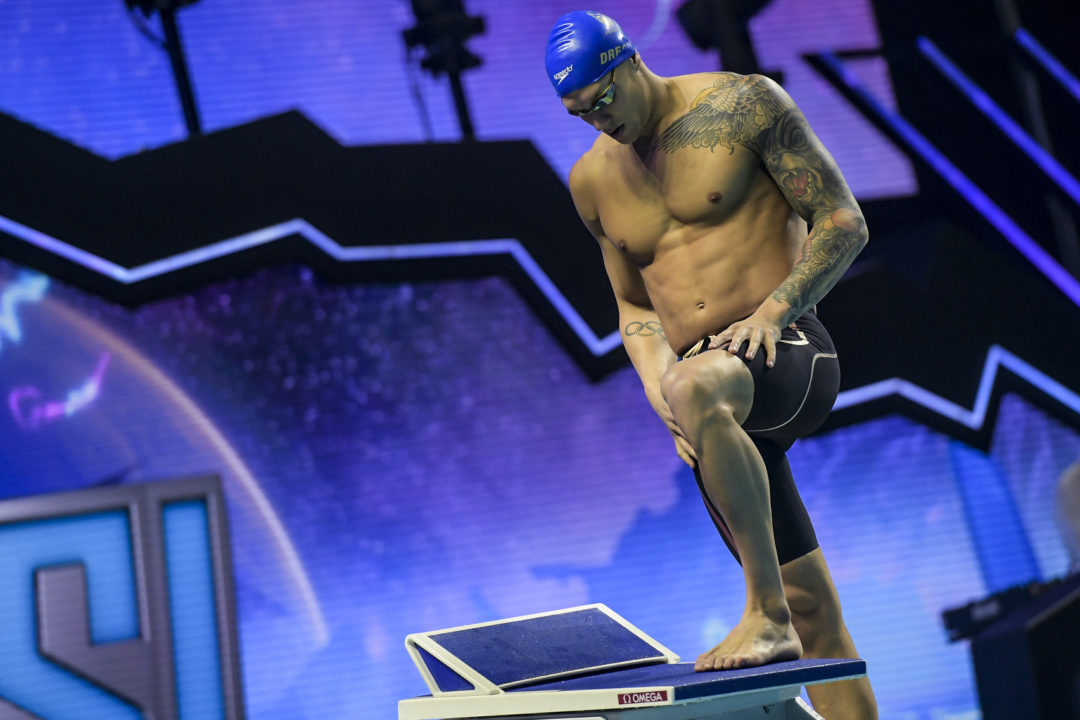 One match day that includes last year's top American team the Cali Condors and superstar Caeleb Dressel will be available to all American households this week. Archive photo via Mattia D'Alberto/LaPresse

The International Swimming League on Tuesday, in addition to announcing that the finals will be held in Budapest in November, rather than Tokyo in December as hoped, have also unveiled two other key pieces of information.

One is the television schedule for live airings and streamings in the United States, and the other is the Japanese rights holder.

CBS Schedule in the US

The most enlightening piece of the CBS schedule reveal is that, while most of the season will be available via the CBS Sports Network on cable or CBS All Access digital streaming, one session on the series’ opening weekend will run on the CBS over-the-air network.

That network is available for free over the air in the United States, meaning that the estimated 120.6 million + households with televisions, approximately 94% of the American population, will be able to watch that meet on Saturday afternoon from 2-4 PM Eastern Time.

In 2015, CBS estimated that CBS Sports Network was available to about 61 million households via cable, which equates to about two-thirds of households with cable television in the country. The sport fits in with CBS Sports’ stated goals of seeking ‘niche’ sports to fill its airtime and avoid ‘overspending’ on major US leagues like the NBA or the NFL.

More recently, CBS Sports Network says that it is “available to 98 million homes,” which doesn’t mean that 98 million homes have it, and has “over 44 million subscribers.”

The network’s highest rated live sports offerings at present are stops of the PGA Tour, which averaged 2.495 million viewers in 2020.

In December of 2019, Variety did not list CBS Sports Network as one of the 147 most-watched American television networks.

Also in revealing the schedule, the ISL has announced that TV Asahi will carry the entire season of the ISL in Japan.

While beIN Sports was previously announced as the rights-holder in 10 Asia Pacific nations, that announcement was not specific about which 10, and apparently doesn’t include Japan.

Japan, the host country for the 2021 Olympic Games, is jumping into the ISL in season 2 via the expansion Tokyo Frog Kings club. While that club will be without one of its biggest stars Daiya Seto for the season after a suspension, there is still the opportunity to capitalize on the pending Olympic excitement ahead of the Tokyo Games.

TV Ahasi is one of 7 nationwide television networks in Japan, available to all of its citizens that have TVs.

Where can I see the replay… CBS Sports Network makes it so hard to find the stream!!

For those of us in USA, getting CBS All Access for 1 week free +$5.99 for 1 month should cover all the meets right?

Actually my bad- CBS All Access includes CBSN not CBSSN. and All the digital matches are pretty much in the middle of the night for me on the west coast.

Ok, this explains why I can’t find it with my CBS all access. To catch this then, we need CBSSN, which is a different subscription? Thanks for clearing that up!

I just went through my channel guide for the next 2 weeks, and cbssn does not show any of the scheduled events.

I’ve tried all day to figure out how to find the ISL on CBS All Access. Agree – if I can’t watch them live and you can’t watch the replay then what is the point? This was actually what got me to finally get a subscription but if I can’t see this then I will be canceling. UGH!

So, no ISL for Germany and Austria? Glad I wasted the money on a flippin’ Eurosport subscription then…