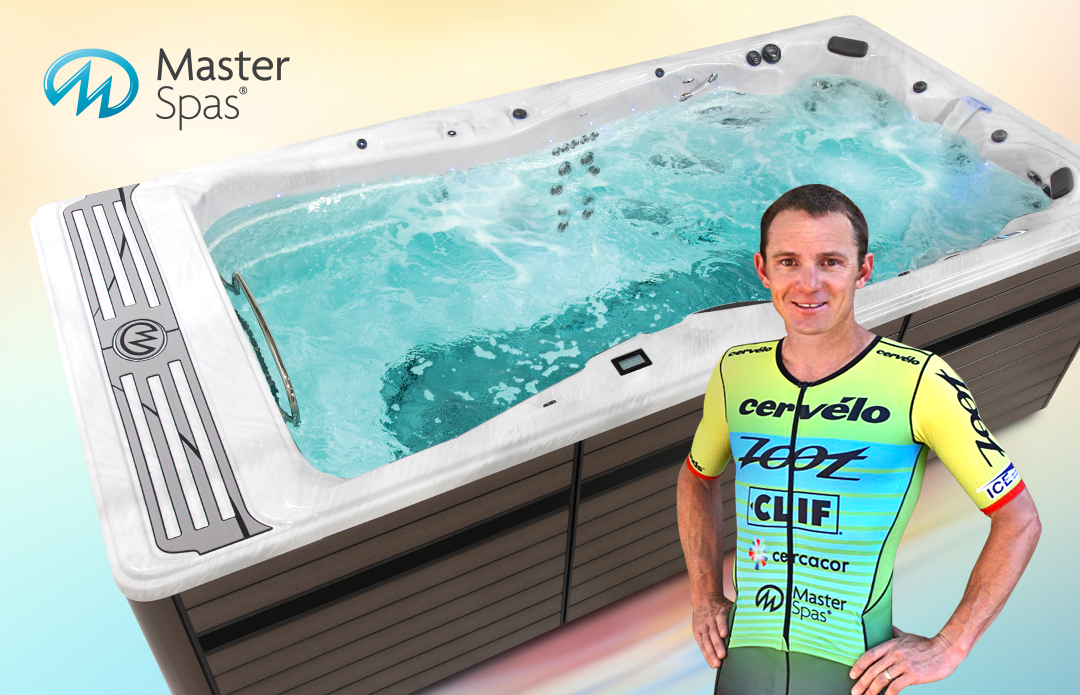 The announcement comes as Hoffman, an accomplished triathlete with six IRONMAN® wins on his resume, sets off to race IRONMAN® African Championship.

As part of the partnership, Hoffman will begin training in the latest innovation from Master Spas — an H2X Fitness Swim Spas Challenger model.

“I am very proud to announce my new partnership with Master Spas and to add their incredible H2X Challenger swim spa to my arsenal of training tools,” Hoffman says.

The Challenger series from Master Spas bridges the gap between traditional jetted swim spas and propulsion systems. The unique airless jet system creates a water current that is more efficient, powerful, and smoother than the competition. With the ability to control the resistance and temperature, novice swimmers to competitive triathletes can enjoy a continuous swimming experience that mimics open water. That’s why swim spas from Master Spas are the official swim spa of the IRONMAN® World Championship.

“We all know that training for a triathlon can be very time-consuming, and swimming is often the biggest barrier or performance limiter for the age-group triathlete. Even as a professional triathlete with a reasonably strong swim, I come from zero swim background, and I need to constantly monitor both my stroke technique and fitness in the water,” Hoffman says. “With the H2X Challenger swim spa right in my own backyard, I will be able to minimize the energy outlay to get to my swim workouts done and focus on the technical work that needs to happen in the water.

“Taking underwater video, or having a coach monitoring from above, is much easier with this swim spa, and I have confidence I am improving my weakness and making it a strength.”

Hoffman has an impressive and inspiring triathlon career, getting his start in 2007. In addition to his six IRONMAN® wins, he’s also placed second at the IRONMAN® World Championship and won seven IRONMAN®70.3 events. He lives and trains in Tucson, Arizona.

“We are thrilled to welcome Ben into the Master Spas Family,” says Kevin Richards, vice president of sales and marketing. “We’re excited to partner with an athlete who shares our commitment to being the best and rising to the challenge. Ben’s perseverance through injury and training is a great example for everyone — whether they are just getting started, coming back from injury, or going for an IRONMAN® win. Swim spas from Master Spas can help people of all levels train better and recover smarter so they can achieve their goals.”

About Master Spas
Master Spas is based in Fort Wayne, Indiana, 90 miles northeast of Indianapolis. Operating out of a state-of-the-art, 460,000-square-foot manufacturing facility on a 33-acre manufacturing campus, Master Spas is the largest swim spa manufacturer in the world, and largest portable hot tub manufacturer that makes 100% of our product in the USA. The company’s executive team boasts more than 150 years of spa manufacturing success and one of the strongest track records in the industry. For more information, please visit: www.MasterSpas.com.

Swimming news is courtesy of Masters Spas, a SwimSwam partner.