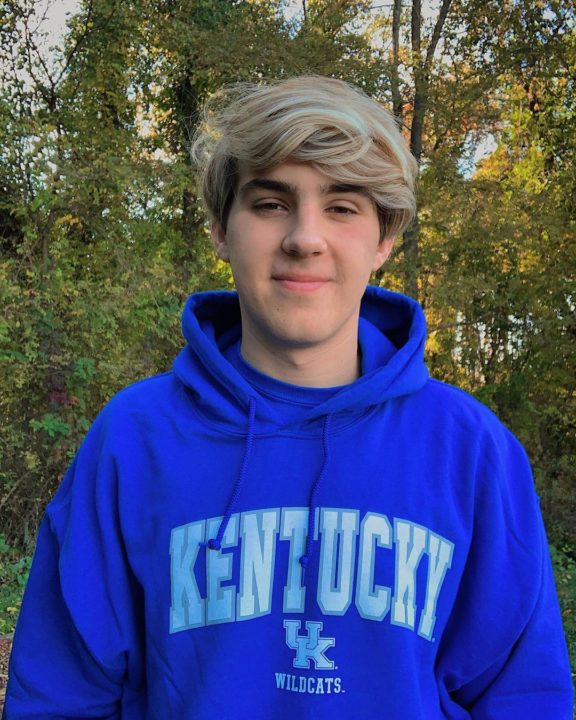 After Iowa cut its men's and women's swimming and diving programs, Aidan Lohr needed a new college to commit to. He's chosen the University of Kentucky.

After originally committing to the University of Iowa, which announced that it was cutting its swim program at the end of last season, Aidan Lohr has decided to join the Kentucky Wildcats in the fall of 2021.

Though my time at Iowa was brief, being part of the swim and dive program felt like being with family and I thank the coaches for that opportunity.

With that said, I am honored to announce my commitment to swim at the University of Kentucky. I am grateful and excited to continue my academic and athletic journey as a Wildcat! Big thanks to my family, friends and coaches for their continued support. Go Cats!

Lohr, who is taking the year off to train with Sergio Lopez at Pinnacle Racing in Virginia, is a native of Bararboo, Wisconsin, where he graduated high school in the spring.

Lohr was already a fast-rising prospect when he committed to Iowa, and that momentum has continued to roll for him into his senior year.

Showing off his unique talents, he was also 2nd in the 100 breaststroke and the 50 free.

At the high school level, he won Wisconsin State Championships for Barbaroo High School as a senior in both the 100 back and 200 IM. He finished 2nd in each of those events as a junior at the Division 2 meet, for the state’s smaller high schools, and 3rd as a sophomore.

While the Division 2 meet is generally not as deep as the Division 1 meet, Lohr’s 100 backstroke time was still was the fastest among the two championships by more than a second.

This is a big late grab for the Wildcats, and one of the best American commits remaining in the class. It’s one Kentucky badly needs too – last season, they scored just 3 points at the SEC Championships in the 100 back, which was fewer than any of the conference’s 10 men’s programs.

Even at that, 3 of their 4 best backstrokers, led by Glen Brown (47.28) graduated. The other, Lukas Kraft, was 48.32 last season and is a rising senior – though is expected to receive an extra year of eligibility under the NCAA’s eligibility extension plan for winter sports.

For all of the success that Kentucky has had in the women’s backstrokes, where they’re one of the country’s most successful programs, the men have not followed suit.

This is going to be a sore spot for Kentucky in whatever the 2020-2021 college swimming season looks like, but the year after, they’ll get much better in a hurry.