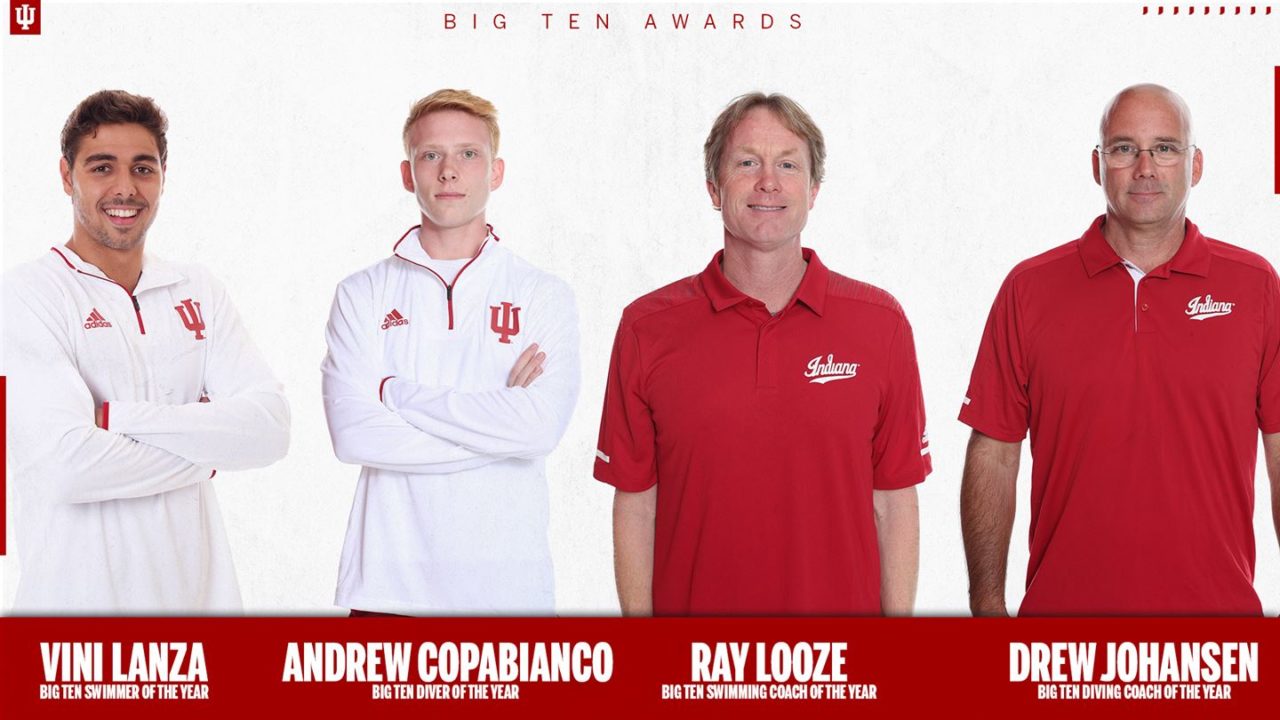 The Big Ten announced on Monday the 2019 Big Ten Men’s Swimmer, Diver, Swimming Coach and Diving Coach of the Year awards, as voted on by the conference coaches. Current photo via Indiana Athletics

Lanza earned two national titles at last weekend’s NCAA Championships. The senior took gold in the 100-yard butterfly (44.37), while also securing first in the 400-yard medley relay (2:59.70). Lanza won the 100-yard butterfly title, his first individual NCAA Championship, setting a new Big Ten and IU school record time. He became the first Hoosier to win the 100-butterfly crown at the NCAA Championships since Mark Spitz completed his four-year sweep of the event in 1972. Lanza’s win gave Indiana its seventh title in the event in program history and earned his 21st All-America honor. Earlier this season, Lanza tallied five top finishes at the Big Ten Championships, finishing at the top of the podium in the 200-yard butterfly and 200 IM, as well as was a member of the 200 and 800-yard freestyle relay teams and the 400-medley relay squad. The Brazil native, was named a first-team All-Big Ten honoree. Lanza’s Swimmer of the Year accolade marks the Hoosiers’ fourth overall and the second consecutive as the Hoosiers’ Ian Finnerty claimed the honor in 2018.

Capobianco earned his first individual title at the NCAA Championships in the three-meter diving event with a final score of 461.65. The sophomore earned his fourth career All-America honor with his performance. At the Big Ten Championships, the sophomore took second place in the one-meter and three-meter events and took fourth in the platform dive. This season, Capobianco earned Big Ten Diver of the Week honors twice, while also being named a second-team All-Big Ten selection. The award marks the 13th time an Indiana student has won Big Ten Diver of the Year, and the first since Darian Schmidt claimed the award in 2013 and 2014.

Looze collects Big Ten Swimming Coach of the Year accolades for the fifth time as the Indiana men’s swimming coach and has earned it five times during his tenure as the women’s coach. This season, he led the Hoosiers to the program’s 27th Big Ten Championship in program history and the third consecutive title. For the first time in 44 years, Looze coached Indiana to a third-place finish at the NCAA Championships for the second consecutive season. Indiana won a total of four NCAA titles this season, matching the program’s total from 2018. The eight NCAA titles over the past two seasons are the most for the program since winning nine in 1973-74. The top-10 finish for the Hoosiers is the seventh in the last eight seasons.