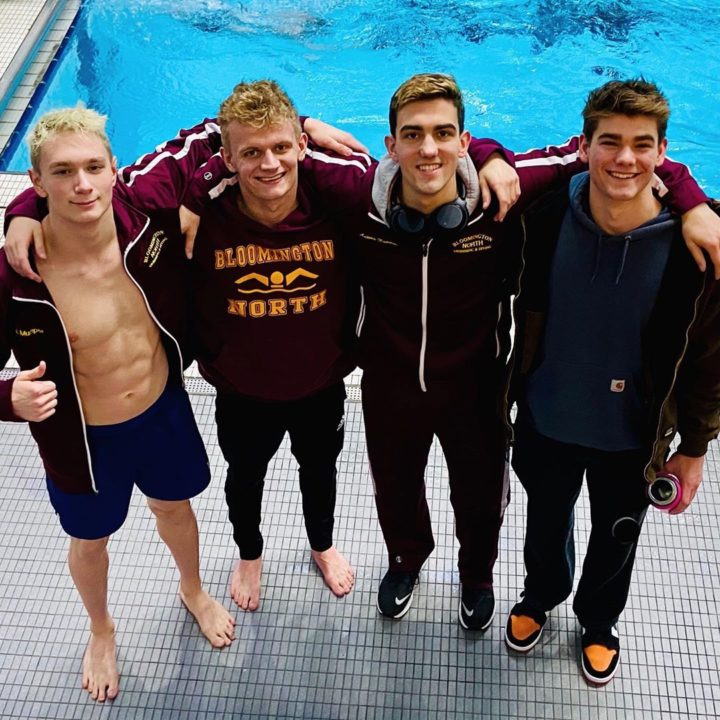 Jakob Mumper (left), with his Bloomington North teammates at the 2020 Indiana High School State Championship meet, was killed on Sunday by his father.

Jakob Mumper, a member of the swim teams at the Indiana Swim Club in Bloomington, Indiana and Bloomington North High School, was killed on Sunday in what police believe was a homicide-suicide.

According to local authorities, 61-year old Jeff Mumper shot and killed his 54-year old wife Greta, his 26-year old daughter Emma, and his 18-year old son Jakob on Sunday at their home in Bloomington. He then shot himself as well.

On Monday, memorials for the family have poured out both in the form of a physical memorial on the front porch of the family’s home, as well as online remembrances.

“It’s hard to comprehend what has happened to my friend ,my comrade, my teammate , my fellow brother,” one of his teammates said in an Instagram post this week. “Jakob It was an honor to be your captain and it was an honor to swim with you. I hope your some where safe and peaceful. Your undoubtedly one of the kindest, unselfish, caring person I have ever met. I miss you brother and remember, Just Keep Swimming!!<3”

Mumper was a senior at Bloomington North High School.

Last season, as a junior, Mumper was an Indiana High School Sectionals Champion in the 100 free, defending his title from his sophomore season. He finished 18th in both the 50 and 100 yard freestyles at the State Championship meet.

“Those were my records from when I went through,” said Bloomington High School North boys swimming coach Max Irwin. “So, to have coached someone who’s now better than me, that’s kind of what you really want as a coach. So, it’s a tough loss on so many levels, the athletics being one of the lesser levels for sure.”

His older sister Emma also swam at Bloomington North High School and was a State Championship qualifier. She was a graduate student in Clinical Psychology at Stony Brook University after attending undergrad at Indiana, where she did not swim.

Police have not released information about a motive for the shooting. Friends of the family told a local NBC affiliate that Jeff Mumper had beaten prostate cancer, but was then diagnosed with pancreatic cancer.

The board members, staff, and families of the Indiana Swim Club (ISC) are devastated by the death of our friend and fellow swimmer, Jakob Mumper, who trained with the Senior group at ISC and was in his senior year at Bloomington North High School. His passing will be felt deeply throughout our club and the Bloomington Swimming community, and our hearts are with his family, friends, and all who knew him.

No words. Prayers for surviving family…..May God strengthen you.

Absolutely horrific but I had a sense it was the father who did this just by reading the title.

Braden. This story must have been hard to write……just so sad!

Sending love and prayers to everyone affected. I can’t wrap my head around this.