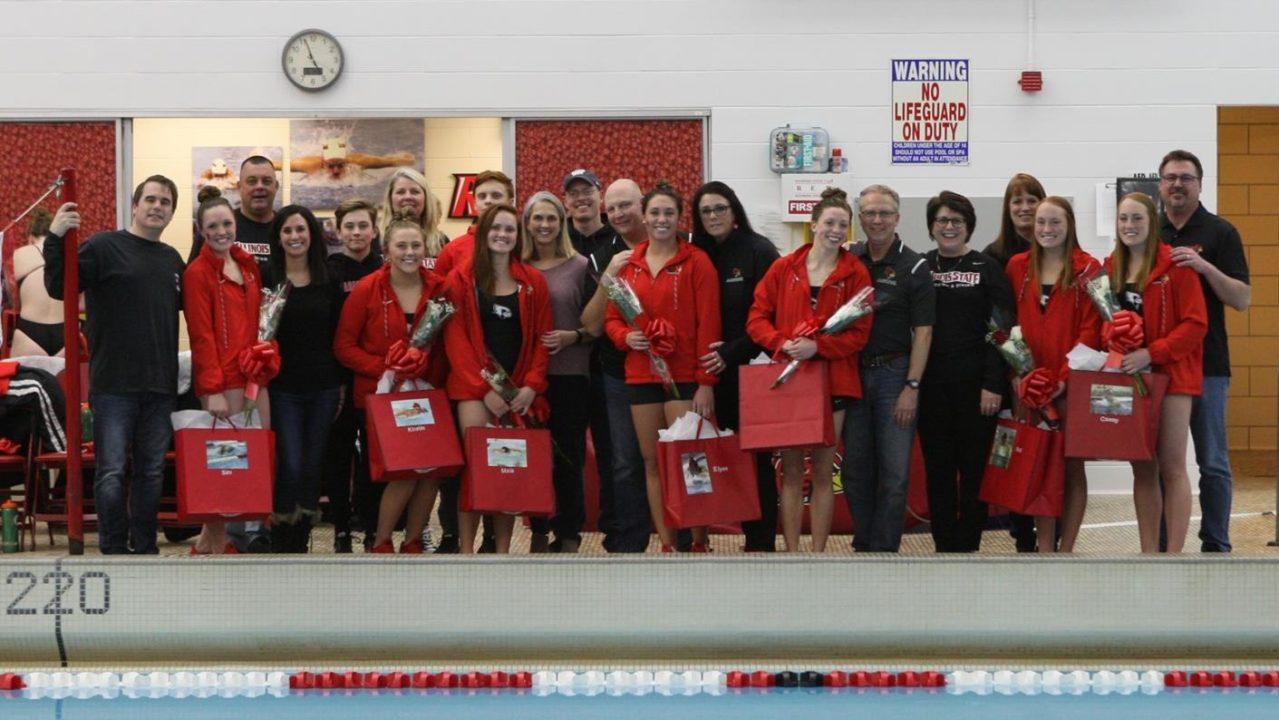 The Illinois State swimming and diving team had a triumphant evening as they defeated the Evansville Purple Aces with an end score of 172-71 on Friday. Current photo via Illinois State Athletics

NORMAL, Ill. – The Illinois State swimming and diving team had a triumphant evening as they defeated the Evansville Purple Aces with an end score of 172-71 on Friday.

“I was very proud of how the team performed today,” said head swimming coach Scott Cameron. “It was great to get a win against a conference opponent and send our seniors out with a great effort tonight. We were much better on the details in our races this week. They keep making improvements from week to week, which is exactly what we hope for this time of year. Overall, I’m very happy with how the team did this evening and I’m excited to see how we do tomorrow.”

“The divers were much improved as a unit from last weekend,” added head diving coach Phil Hoffmann. “I am very pleased with where we are, but we cannot rest, as each week it is important to get better heading into the conference championship.”

The Redbirds will turn around and head to St. Louis tomorrow to compete against the Washington University Bears and Wabash College. The meet is set to begin at 1 p.m.

NORMAL, Ill. – The University of Evansville women’s swimming and diving team competed well, but were ultimately defeated by Illinois State this evening.

“This weekend is a good test for our women’s team heading closer to the MVC Champs,” said head coach Brent Noble. “We had some tough racing tonight, and now we get to head back to Evansville to do the same tomorrow. We don’t get many opportunities to compete this many events in a short period of time before the conference meet, so this weekend is a good opportunity to prepare.”

Senior Kristen Myers took the sole win for the Aces with a two-and-a-half second win, clocking 2:06.82 in the 200 butterfly. Myers also participated in the 200 Medley Relay with fellow senior Sam Gowdy and juniors Alaina Sylvester and Emma Hennessy for a 1:49.46 earning 2nd place.

Senior Kaylee Gubricky took the runner up spot in the 50 freestyle, her final time a 24.90. Junior Ashton Adams came through with a 5:18.11 in the 500 freestyle, also taking 2nd place.

The swimming competition concluded with Myers, freshman Pearl Muensterman, junior Kristy Kupfer, and Gubricky taking 2nd in the 200 Freestyle Relay, clocking in a 1:39.98.

The Aces have a fast turnaround with Senior Day taking place at Wyttenbach Pool at 1 p.m. on Saturday against Saint Louis.