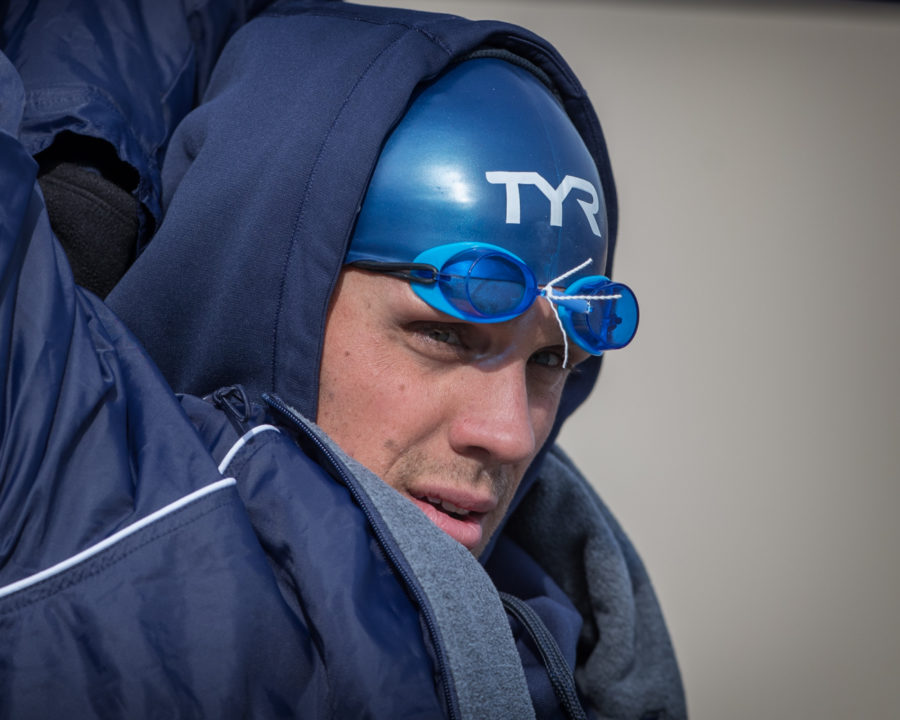 Olympic gold medalist Tom Shields spoke with NBC Sports about his recent Instagram post, in which he opened up about his mental health. Archive photo via “Rafael/Domeyko Photography”

A week after he opened up in an Instagram post about attempting suicide in late 2018, Olympic gold medalist Tom Shields further discussed his experiences with mental health and his reasons for opening up about his own struggles.

“My time in the sport is coming to an end,” Shields told NBC Sports’ Nick Zaccardi. “As I’ve gotten older, I don’t just want to do nothing with this [sport’s] platform, as small as it is. I had this happen to me, and I feel pretty level-headed about it. I did this to myself, rather. But it didn’t really seem too hard [to post]. I just kind of thought it might help some folks.”

Shields added that on the Wednesday morning of his attempt, he had left swim practice halfway through after having “been awake since Sunday.”

“That was kind of the precipitating moment, but there were a lot of problems going on,” he said, and noted that he “never previously tried to harm himself physically.”

According to NBC, Shields started going to therapy later that day. There, he learned about techniques like eye movement desensitization and reprocessing psychotherapy. He now uses cognitive behavioral therapy worksheets and “other breathing and memory exercises.”

“To get into a state of mind where you feel like you,” Shields said. “I do a lot of that in my head, a couple hundred times a day, constantly checking in. It’s very similar to Hindu meditation classes I took or Christian prayer.”

He added that he feels he did not “maximize” his performance at the 2016 Olympics, and that that is a “regret.”

“All of my best training has been since 2015 Worlds, for sure, so it’s been a frustrating process, but it’s an interesting thought experiment,” Shields sadi. He also told NBC that he watches videos of his 2014 butterfly sweep at U.S. Nationals twice a year.

“I see a lot more freedom in my swimming [then],” he said. “You can see that I’m not worried about much.”

In his Instagram post, in addition to his wife Gianna, Shields called out longtime coach Dave Durden for “rescuing” him.

“He basically parented me through college,” Shields said of Durden. “I don’t think I ever could have swam successfully under any other coach just because I don’t think anyone else could have dealt with me, to be honest.”

Shields tagged former Cal teammate Sean Mahoney, in whom Shields confided two weeks after his attempt, in his Instagram post. Mahoney spoke with NBC as well, saying he thinks it’s important that people have someone they can talk to.

“It’s definitely a subject that I’m pretty touchy on and empathetic to,” Mahoney said. “Tom and I were already close, and knowing that something this serious was going on with him just made a stronger reason to do the dinners, to just be a friend to this guy. One of the hardest things for someone going through mental health problems is people want to treat you differently, and they’re not sure how to act. Having someone to listen to — and listens to you — having that outlet to talk to, someone who is treating you the same before and will treat you the same after, at least in my experience from what I’ve seen, is very helpful

In the end, Shields said he hopes his post will help make it easier for people to ask for help when they need it.

“This is going to help some people, you hope,” he said. “More than anything, I’d like to shift the conversation. [Suicide] attempts are always going to be a big deal, but I hope that we get to the point where it’s not a big deal to just ask for help.”

Thank you for opening up about mental health. It is clearly an important topic that can be difficult to discuss. We need to learn to solve the problem, instead of giving up or bottling it up.

This is the kind of guy that we need to use his platform. A wonderful guy, and I’m glad he’s still fighting

Tom
From a Masters Swimmer who loves Fly & one person to another I’m glad you’ve gotten help and are moving forward. I’ve watched your career since CAL and re-watch videos of your double in 2014 myself for inspiration. In an earlier note you mentioned letting people down, please don’t feel that way. Your career for many of us who you will never meet or know has been nothing but a 100% pleasure to watch and appreciate from afar. GOOD LUCK

Good point. Swimming is a good exercise after USA swimming.

Tom shields once spoke to me through Instagram private message at one of my lowest moments. He gave me a lot of kind words and advice on the issues I was facing and the worries I had about my future and my goals and how best to get to my goals. Even over text he was so kind and helpful and never made me feel like he didn’t want to be as kind and helpful as he was being. He never made me feel unwelcome. I attended a clinic with him just over a year ago and the help he gave me with my butterfly stroke is something I take to heart still today. He’s a true champion of our… Read more »

Good for Shields for being so open about this. That’s actually a constructive part of the healing process, too. Once something is taken out of the realm of being a deep, dark secret, it holds less power over us. The more you can talk candidly about something like a debilitating depression, or a suicide attempt, or a poor self-image, the more *perspective* (overused word, I know, but appropriate here) one gets on oneself.

There’s another lesson here for everybody else: most of us were probably shocked that Shields, of all people, would have such a lousy self-image. Here we have a handsome guy who’s a Cal graduate who’s a way, way better swimmer than most of us ever dreamed… Read more »

That’s true, less than 1 percent make it to the Olympics. As Socrates, the Greek philosopher stated its to know oneself. I knew you once took religious studies and philosophy classes in college, so his statement is familiar to you.. So, you have a lot of things to be good at after your swimming career.

God bless him. And kudos to Dave Durden for being the friend he needed.

Kudos to Sean Mahoney and, especially Gianna. Not to mention the therapist that took him on as a new patient that same day. Lots of heroes in this story, but mostly Tom.