How Many Swimmers Would Have Qualified for the 2020 Olympic Trials? 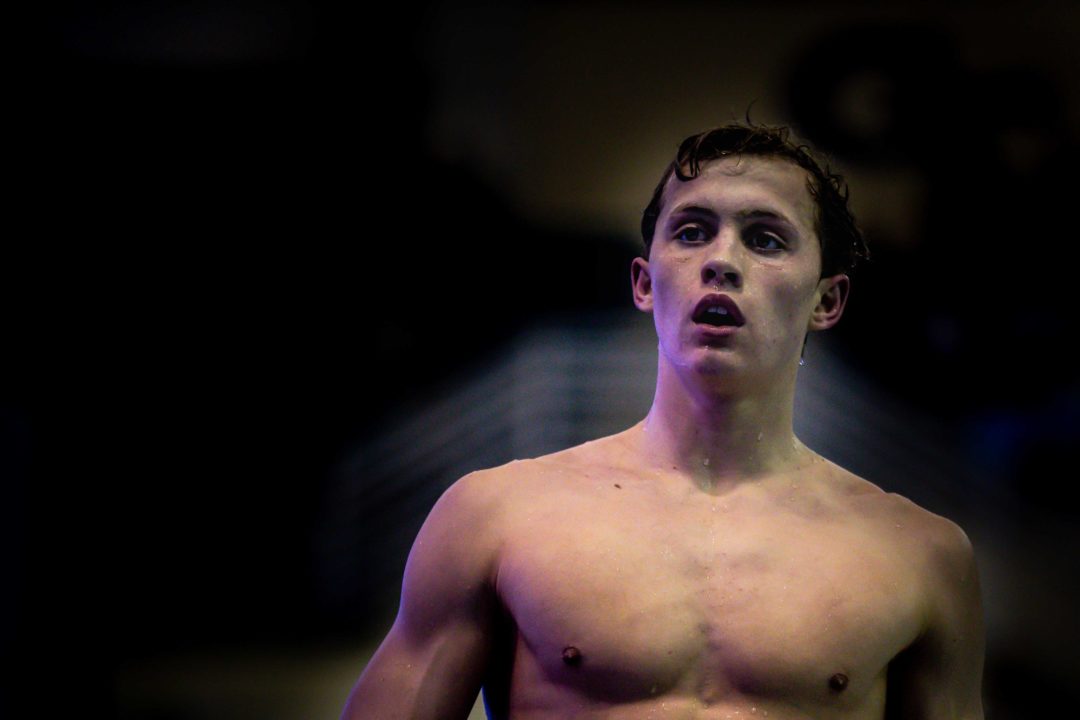 If we rewrote 2020, without the coronavirus pandemic, how many late qualifiers would there have been for the Olympic Trials? History has a clue. Archive photo via Jack Spitser/Spitser Photography

A photo supposedly showing a boy swimmer forced to wear a girls swim suit went viral – but the boy’s mother says the suit was not used as a punishment.

Check out race videos from night 2 of the 2021 US Olympic Trials including Regan Smith’s dominant 100 backstroke and Lilly King’s sub-1:05 100 breast.

Check out all the action from the 3 Olympic-qualifying races on night 2 of the 2021 US Olympic Swimming Trials – Wave II.

The theme of Tuesday morning will be event doubles – who is taking on two events and who scratched an event or two to focus in on a primary swim.

Above: Carson Foster was one of the last qualifiers for the 2016 U.S. Olympic Trials.

After the announcement that the 2020 Summer Olympic Games, and therefore the 2020 U.S. Olympic Swimming Trials, would be postponed until 2021, USA Swimming indicated that they were considering stiffening the Olympic Trials time standards for any new qualifiers between March of 2020 and the 2021 trials.

USA Swimming COO Mike Unger later communicated caution, saying that if that happens, or by how much, will be largely dependent on how long it takes teams to get back in the water. Among his comments was that Omaha indicated that there was enough hotel space for the move and a possible increase in participation – although anybody who’s been to the Olympic Trials might question that based on prior experience.

The reaction from coaches and swimmers around the country was swift and loud, demanding that the standards be left the same to give those swimmers who lost their chance at spring tapers, where they were shooting for Olympic Trials standards, the best chance possible to qualify.

Originally, the intent of both a shorter qualifying period and tougher standards was to shrink the number of participants to somewhere between 1,200 and 1,400, which is down from nearly 2,000 for the last few editions in Omaha.

As of the closure of swimming across the country (USA Swimming has said they won’t sanction competition until at least June), there were about 1,214 qualifiers. The word “about” is used here, because there’s some fuzziness on a handful of swimmers who hold dual citizenship and haven’t yet declared a nation to compete for.

What we wanted to know is – how many swimmers might have been robbed of Olympic Trials qualifications with the cancellation of the spring taper season?

Without a crystal ball, there’s no way to know for sure. There are at least hundreds of swimmers, maybe even north of a thousand, who were within striking distance of an Olympic Trials cuts and felt confident that, with a good taper, they were going to hit those cuts.

The best analysis we can make, then, is to look at what has happened in the past. This is still not perfect, because standards get faster every cycle, but 2016 is the best analysis.

Andrew Mering, one of the developers of the Swimulator tool and one of SwimSwam’s resident stat-guys, ran some data.

Note: the Total Qualifiers row is based on individuals, not qualifying swims, so that’s not a “sum” of the rows above it.

There were 144 new qualifiers between March 12th, the equivalent date to when swimming basically shut down this year, and June 18th, the last day to qualify for the 2016 Olympic Trials.

There was a surprisingly-big list of swimmers who qualified during that period that could make the team this year:

Note: the Total Qualifiers row is based on individuals, not qualifying swims, so that’s not a “sum” of the rows above it.

Among the late qualifiers on the men’s side:

Put another way, that’s about 29 hours of swimming at the Olympic Trials lost (in terms of swimmer-minutes), or about 3 hours of time saved in “meet time,” which comes out to about 25 minutes per session.

There are some tradeoffs here. There are a handful of swimmers who are qualified for the 2021 Trials that won’t race – either because of retirement due to the delay, or injuries. The cuts are also faster (see how much faster here), so it’s likely that maybe the number of late qualifiers for 2020 would have been lower than 2016.

In either case, the number is about 300. That’s about how many USA Swimming, if the goal is to simply ‘recreate the lost history’ of the spring of 2020 in terms of Olympic Trials qualifiers, should be shooting for.

The big mystery here is how to do that. Nobody knows yet when the sport will resume, and when it does, nobody really knows how long it’s going to take swimmers to get back on track. Swimming hasn’t always been a 12-months-a-year sport, but there’s not much expertise on training a modern swimmer to that level after a 2-month layoff, so there’s going to be a lot of trial and error going on.

(Unless you’re referring to length of meet – then for sure that will impact it).

Here’s an idea: USA Swimming decides how many athletes they want at the meet for men & women. Then they look at how many more athletes they are allowed to have qualify. For example, maybe there are 200 more spots on the men’s side and 220 on the women (these are completely arbitrary). Then USA swimming could:

Fill those remaining spots by an equal amount per event. So they may decide they want 15 more qualifiers in each event. Then they would literally just select the top 15 athletes per event who have not previously qualified in that event. This time frame would go from when meets start again until maybe 2 weeks before trials. They could also choose to… Read more »

This is not a bad idea!

I completely disagree. Instead of robbing us, the swimmers almost at the cut, which they already have, they are going to pick the +/-15 best times just like that? I understand that the NCAA rolls like that, but that’s an every year thing and they’ve been doing it that way for who knows how long. That format for trials wouldn’t work for the majority because it doesnt show who really wants it. Some people are gifted and may be in the top 15 but doesn’t work for it and may perform lower than that of someone who has worked their butt of and had it snatched 1 week from go time. I just don’t find it fair. You said do… Read more »

People “really want it” all the time and don’t get it. Life’s unfair, deal.