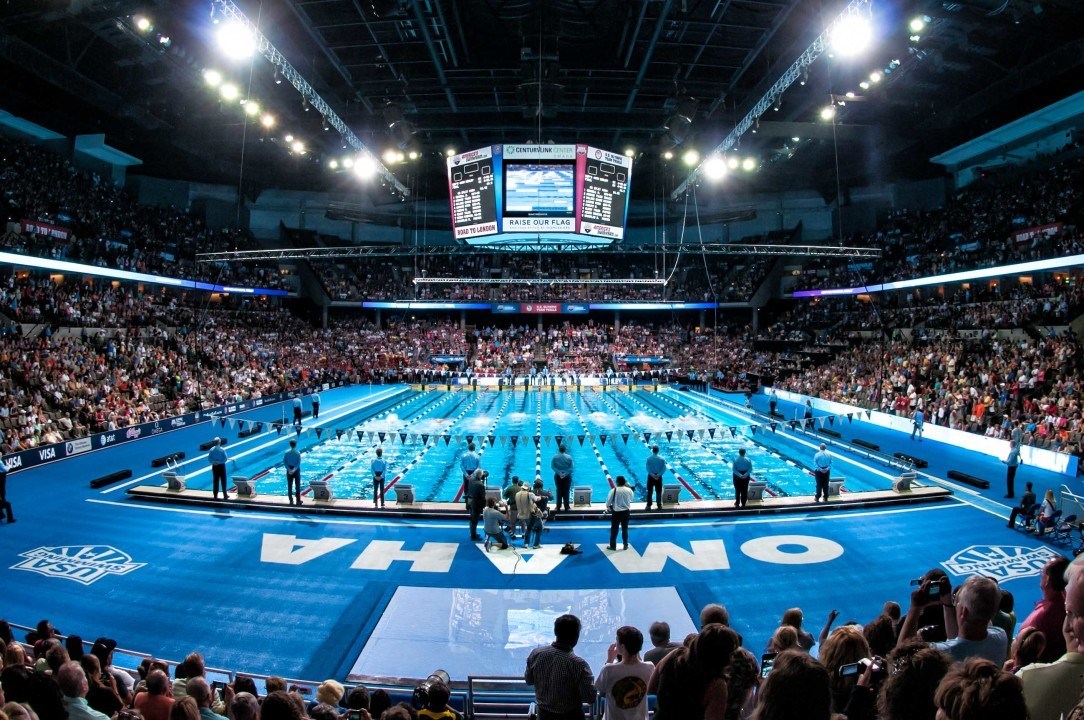 USA Swimming announced Friday it will release updated cuts for those yet to qualify for Omaha, but it hasn't decided if they will be faster. Stock photo via Mike Lewis/Ola Vista Photography

USA Swimming has not yet decided on how it will handle qualifying cuts for the rescheduled 2021 Olympic Trials, Chief Operating Officer Mike Unger told SwimSwam. Swimmers who already qualified based on the 2020 cuts will remain so, while a new qualifying period will open when the sport returns to action.

In an announcement of the new dates Friday morning, the organization said that “updated Trials qualifying standards will be released ahead of the official return to competition across the U.S.” With USA Swimming’s previous move to shorten the qualifying period in an attempt to limit qualifiers to the 1200-1400 range, it seemed reasonable that the updated qualifying cuts would be significantly faster.

Unger, however, said that that is not necessarily going to be the case. Cuts could potentially remain the same, but the decision depends on when swimmers start competing again and how long the qualifying period will last.

“All options are being evaluated and looked at right now, from many different standpoints, but we’re not going to release something when there is nobody swimming and nobody training and nobody competing,” Unger said. “If we released it now and we’re not competing again until January 1, that changes what we might do. If we’re competing again July 1, that also changes what we might do.”

If leaving the cuts as they are leads to another large meet, USA Swimming isn’t facing any restrictions from the host venue itself – but long sessions and crowded warmup pools aren’t optimal.

USA Swimming’s steering committee – which is comprised of top coaches, including the Olympic head coaches for both 2016 and 2020, and athletes – was behind the decision to move the meet a week earlier with respect to the Tokyo Games than the meet was going to be in 2020, Unger said.

“They continued to evaluate the timing of the Trials, the time that athletes would be permitted to go home after the Trials, the timing of the domestic camp in the U.S., the travel to the training camp in Singapore, the crossing the dateline and getting to the Village, and the Games starting, and coaches unanimously preferred to have a little bit longer window between the two,” Unger said. “In particular, on the domestic camp – they wanted to make sure they weren’t pressured at the domestic camp, where a lot of the athletes will go back to work for a significant period of time.”

USA Swimming then had to vet the new dates with a lengthy list of parties – that included FINA, USADA, NBC, the NCAA, MECA (the authority that runs the Omaha venue), and indirectly, the International Olympic Committee. Friday’s announcement marked 17 days since the 2020 Games were officially pushed back year.

“When the coaches had a chance for a redo, they thought, ‘let’s throw a few extra days in here,'” Unger said, noting that the timing now matches what Team USA had before the 2008 Beijing Olympics.

The timing will now afford athletes the opportunity to go home after Trials – likely for four to six days – without cutting into training camp time.

While Olympic Trials usually overlap with the final weekend of the College World Series in Omaha, when there are only two teams left, it will now overlap with the eight-team first weekend. But Unger said he’s not concerned about hotel availability and affordability, and that club coaches will receive information on booking rooms for their teams next week.

“As it has worked out, we believe we have as many – if not more – hotel rooms available,” Unger said. “Sometimes it’ll be different hotels, but we have really good availability at the hotels that we feel comfortable with. So whether it be the teams that are making reservations or spectators, we have them covered.”

All updates regarding hotel booking, tickets and schedules will be posted to usaswimming.org/Trials.

Everything stated, however, is contingent on the world’s health situation. There’s no guarantee yet that even the postponed Olympics will take place as planned, as Tokyo 2020 CEO Toshiro Muto pointed out Friday.

Appreciate them paying attention to athlete’s mental health. The 4-day turnaround a couple years ago for athletes traveling overseas (we remember THAT one yes?) was nuts. The need to decompress a bit after “the toughest meet in the world” is a wise choice.

It was 2012 … and it was awesome … but doubt it will happen again as I heard it was a very expensive event to put on, and most Masters swimmers don’t do long course racing. I’d certainly do it again, if given the opportunity.

In all reality, they have to plan for all scenarios, whether that be an overly large Trials, a Trials with no spectators and a participation number capped by health/government agencies, or not having the Trials at all.

“‘CONSIDERING ALL OPTIONS”
That means those of us masters swimmers who casually train 3 days a week –still– have a chance at qualifying?!
#omaha2021

Please change the 50 free cut for men to a 27.99. I would appreciate that very much. Thank you USA Swimming.