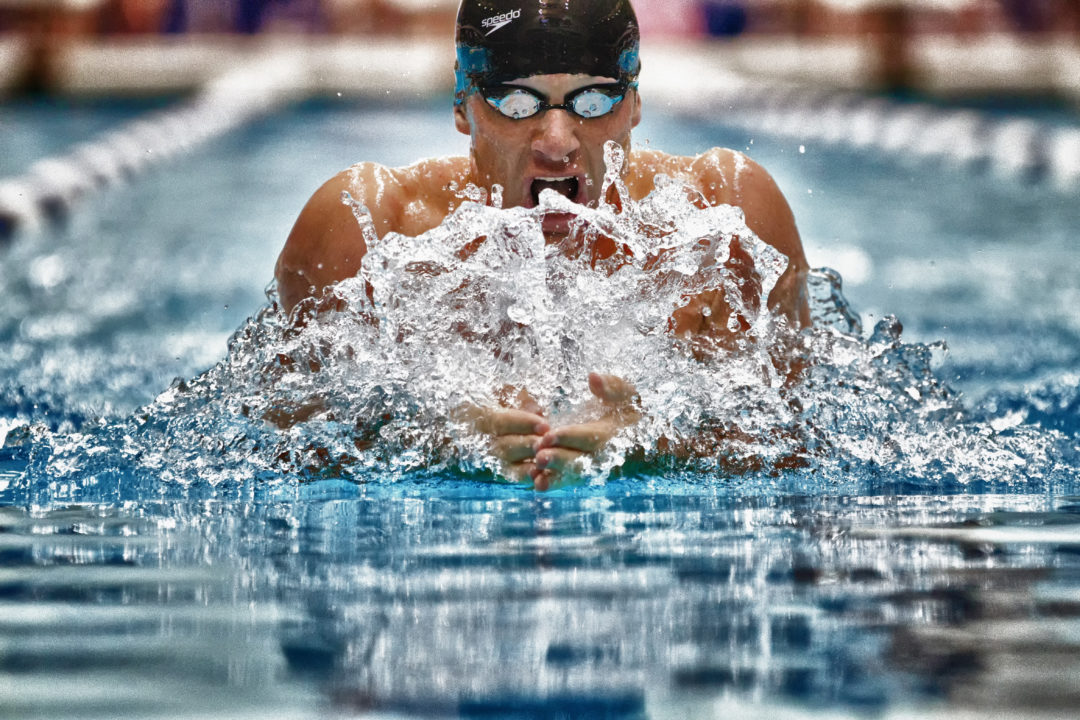 At the 2006 US Nationals, Brendan Hansen went on a double world record spree in the 100/200 breast. Read more on how Hansen took down the records here. Stock photo via Tim Binning/TheSwimPictures.com

Yesterday Arno Kamminga of the Netherlands joined the 2:06 club of men’s 200m breaststrokers, just the 4th man ever to do so.

In 2005, FINA allowed a single downward dolphin kick into the breaststroke pullout. This new rule gave breaststrokers extra propulsion off their turns, and changed the stroke’s future dramatically.

Off the start, Hansen was ruthless, taking the race out in 27.66. Throughout the race, Hansen maintained a tempo of 1.15-1.30s, which was roughly the same as event runner-up Scott Usher (1:01.07). However, Hansen’s stroke was very biomechanically efficient that he was able to take 6 strokes less than Usher.

Hansen flexed his strong distance per stroke during the 200 breast final, immediately establishing a body-length lead on the field at the first turn. When looking at Hansen’s stroke in comparison to the others in the field, he finished each stroke cycle in a complete streamline, allowing him to build a high distance per stroke. However, what made his stroke lethal was how efficient every stroke was. Hansen swam 17 strokes after the first 50 off the start, yet his consistent technique propelled him to swim 17/18/20 strokes for the remaining three 50s.

These obscure videos are a swimming geek’s (me) heaven

I love watching these back, feels like the good ole days. But the quality is cringe

I watched the 200 swim live, and I’ll always remember it! It was the first world record I witnessed in person, and I got a picture with Brendan afterwards. For a 17 year old, it made my life. Brendan was a fantastic swimmer and is a great guy.

Is he still alive?