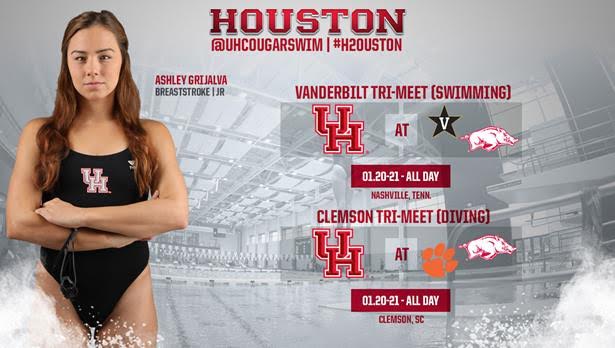 The Houston Cougar Swimming & Diving team will split its squad and compete in two separate meets this weekend with... Current photo via Houston Athletics

The University of Houston Swimming & Diving team opened the 2017 portion of their schedule with a 200-96 win over the University of the Incarnate Word led by junior Micaela Bouter on the boards and freshman Peyton Kondis and junior Sharo Rodriguez in the pool each wining two individual events at Anne Barshop Natatorium.

Houston is returning six of seven student-athletes from the 2016 All-American Conference Team. Sophomore Koutsouveli swept the backstroke events and podiumed in the 400 IM at the 2016 American Championships. Fellow Sophomore Hannah Herbst won the 500-yard freestyle and placed third in the 1,650-yard freestyle.

On the boards, diver Taylor Olanski will look to four-peat in the platform, while Bouter looks to defend her 3-meter crown.

The Cougars will travel to Baton Rouge, La. to compete in the LSU Quad Meet for their final meet of the regular season on Jan. 27-28. Houston will face No. 25 LSU, Rice and Tulane.

COUGARS TO HOST AMERICAN CHAMPIONSHIP
Houston will host the American Athletic Conference Championships for the second consecutive year as the best swimmers and divers in the league visit the CRWC from Feb. 15-18. Following the conference meet, the Cougars will look to close the season at the NCAA Championships, to be held March 15-18 in Indianapolis, Ind.