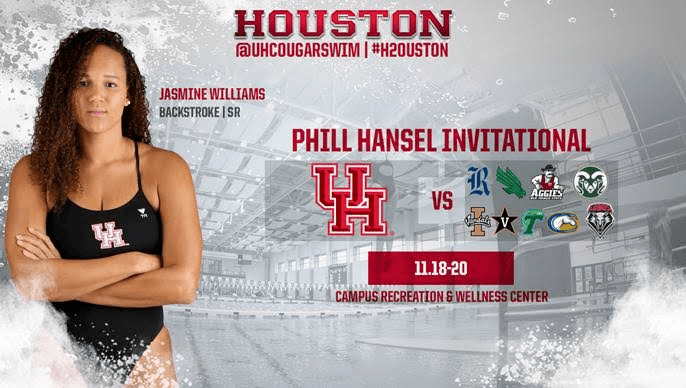 HOUSTON – The University of Houston Swimming & Diving team will host the annual Phill Hansel Invitational in honor of...

The three-day meet begins each morning at 10 a.m. with preliminary sessions. Following a break, the teams will head back into the pool for finals, beginning at 6 p.m. and Sunday’s finals start time at 5 p.m.

The Cougars are coming off a second-place finish at the Rice Invitational. Freshman Laura Laderoute won her second individual event of her collegiate career after taking the 100-yard backstroke at the two-day meet.

The invitational will feature 21 events – 13 individual races, five relays and three diving events. The meet offers the Cougars a preview of the conference championship format with multiple teams and a championship style-scoring format.

This weekend’s meet is named in honor of former University of Houston Swimming & Diving Head Coach Phill Hansel. Hansel, considered the Father of Cougar Swimming & Diving, led the Cougars from 1975 to 1996, racking up 70 dual-meet victories, a school record that still stands. He helped UH finish in the Top-20 ten times at the AIAW and NCAA Championships.

Hansel also had an impressive resume at the international level, serving as the manager of the 1992 U.S. Olympics teams and working with the Singapore teams at the 1984 and 1988 Olympics.

The Cougars will send a select group of swimmers to the AT&T Winter Nationals, Dec. 1-3 in Atlanta, Ga.