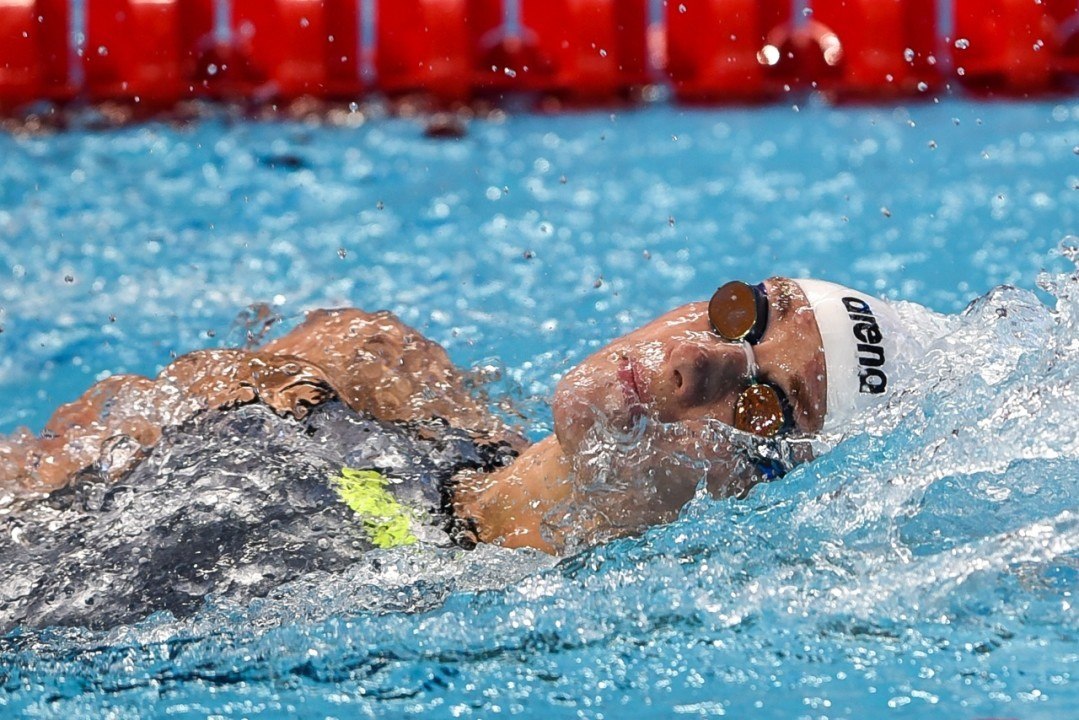 Katinka Hosszu swam every event this morning and took down two of her own meet records in the process. Current photo via Peter Sukenik/www.petersukenik.com

Katinka Hosszu is a name we just haven’t been able to say enough in the past few months, and she’s not slowing down any time soon in the road to Rio. After winning the 400 IM yesterday, Hosszu came back this morning to destroy her own meet record in the 100 back, taking down the pair of 1:01.74s from 2013 and 2014 with a 1:00.48. This huge improvement goes to show that she is in an amazing place in her training compared to the last couple of years (even though 1:01 still isn’t too shabby), and it foreshadows monumental success this summer.

Hosszu’s second meet record of the morning came by an even bigger margin. In the 200 IM, she threw down a 2:10.75 to take down her own meet record from 2014 by nearly three seconds. She came in over five seconds ahead of the likes of Spanish and British international stars Mireia Belmonte (2:16.08) and Hannah Miley (2:17.86), who will be seeded second and third in the event.

Hosszu’s 200 freestyle, although not a meet record, was also fast enough to grab her a lane four spot tonight. Her 1:59.72, followed closely by Spanish swimmer Melanie Costa‘s 1:59.94, was about two seconds off the record 1:57.48 set by Annika Lurz in 2007. So far, Hosszu has swam every event of the meet and made every ‘A’ final. Unless she scratches, which seems unlikely given that she swam every event last night, Hosszu is truly set to live up to her “Iron Lady” status this weekend. Her ability to swim fast while tired, a skill she’s working on this weekend, helps to set her apart from the rest of the field both at this meet and in the world.

Jan-Philip Glania of Germany also set a meet record on the men’s side in the 100 backstroke prelims, taking down Randell Ball’s 54.94 from 2010 by the slimmest of margins with 54.93.

Philip Heintz of Germany will lead the field in the men’s 200 medley, after clocking 2:04.33. Laszlo Cseh will also contest the final tonight; he sits at fourth place.

A packed field will contest the women’s 50 fly tonight, with the top fourteen swimmers hitting within one second of each other. Dorothea Brandt of Germany leads the field with a 27.17, and Hosszu sits at sixth place with 27.63. Poland’s Konrad Czerniak leads a similarly packed field in the men’s event with 23.77, while Hungarian superstar Cseh lurks in 5th place after swimming 24.30.

German swimmer Hendrik Feldwehr will be the top qualifier for the men’s 50 breast, after swimming 27.92 and coming within .01 of the meet record held by Johannes Neumann and Giedrius Titenis. On the women’s side, Italy’s Martina Carraro leads the field with 31.23.

Brandt also will go in the top qualifier in the 50 free, after swimming 25.07 in prelims. Her own meet record, 24.90, will be in danger tonight.