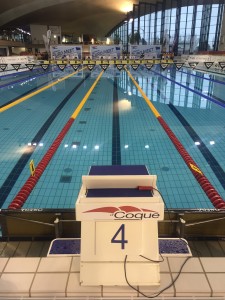 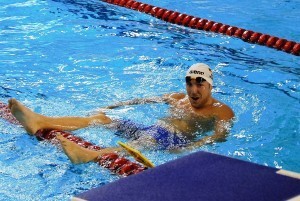 The 2016 Euro Meet featured some of Europe’s best swimmers like  Katinka Hosszu (Hungary), Marco Koch (Germany), Laszlo Cseh (Hungary), Velijmir Stejpanovic (Serbia), Mireia Belmonte (Spain), Hannah Miley (GB), Dorothea Brandt (Germany), Franziska Hentke (Germany), Ben Proud (GB) and many more.
Marco Koch, the 2015 World Champion (LC) in the 200 m breaststroke and European Champion (SC) both in the 100 m and 200 m breaststroke, highlighted the event with another 2.07 swim – he finished the 200 m breaststroke in 2:07,69, that has been another best time in the world ranking – only Marco Koch was faster than Marco Koch in the 2015/2016 season so far. Of course, his time was a new Euro Meet record – 38 records were broken in heats and finals, some were bettered twice. Katinka Hosszu collected 6 gold medals (200 m IM, 400 m IM, 100 m backstroke, 100 m freestyle, 200 m freestyle, 50 m butterfly), Laszlo Cseh finished first four times (200 m IM, 400 m IM, 100 m and 200 m Butterfly) and Velimir Stjepanovic was the freestyle king with wins in the 100 m, 200 m and 400 m.
Since the first edition of the meet in 1999, it has established itself as a top event and the meet always brings top-swimmers to Luxembourg and it is also a door opener for youngsters. A bonus of €21,800 (about 23.500 USD) in prize money was offered. The Euro Meet was a qualifying event for the Olympic Games. On the three days, the audience saw more  than 3.000 individual starts and 43 relays.

The Euro Meet took place in the beautiful aquatic centre “d’Coque” at Luxembourg-Kirchberg. The facility has a 50 m, 10-lane competition pool and also a 50 m training pool as well as a 25 m warm-up pool. Luxembourg is a small country in western Europe, it is bordered by Belgium, Germany and France and it is one of the smallest sovereign states in Europe. Nonetheless the city of Luxembourg, which is the country’s capital, is the seat of several institutions and agencies of the European Nation and Luxembourg is the largest private banking centre in the eurozone. Luxembourg is a very international and  hospitable country and the organizers of the event and the audience welcomed all swimmers, coaches and officials very cordialy. The video shows the great atmosphere at a great 2016 Euro Meet.