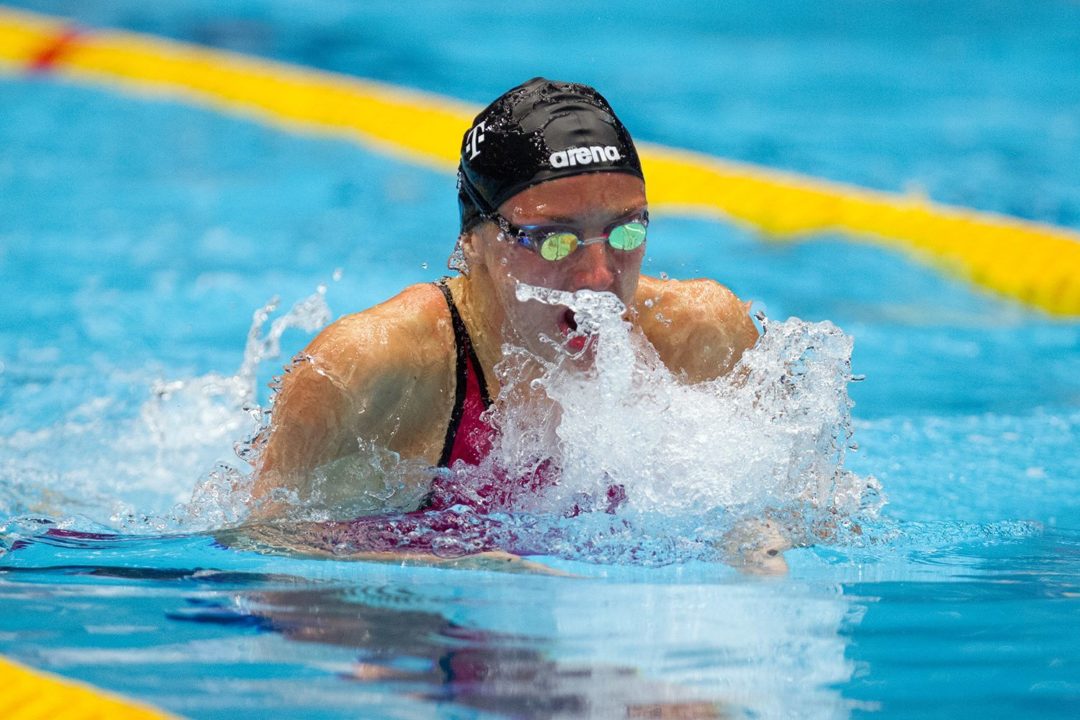 Katinka Hosszu had another 5-for-6 day at the 2013 Indiana Ocean Championships on the French island of Reunion. Archive photo via Jesper Nielsen | www.sttfoto.dk

Hungarian Katinka Hosszu went 5-1 across the 6 offered races on the first day of the 2013 Indian Ocean Championships (25m pool); on day two she matched that output, with another 5 gold medals in 6 events, meaning an even 10 for the championship with one day to go.

On average so far, in two-and-a-half hours of finals sessions, Hosszu is average a gold medal approximately every 15 minutes, and a final every 12:30.

While not totally unprecedented, if Hosszu can hang on and wind up with 15 gold medals (she’s got 5 entries for the meet’s final day, though it will be hard to beat Yulia Efimova in the 200 breast), it would be quite a feat. Though perhaps a different kind of feat than winning 5-6 gold medals at the Olympics, this is still quite a statement – one maybe only comparable to the 15 golds and 1 silver that Tunisian Ous Mellouli won at the 2011 Pan Arab Games (though he had the benefit of relays, and a slightly more spread-out schedule).

Hosszu’s lone defeat of the day came in her 3rd event, the women’s 50 breaststroke. She fell to a 29.49 from the World Record holder Yulia Efimova of Russia, who’s now won both of the sprint breaststroke races at this meet so far. Dzerkal was 2nd in 31.59, and Hosszu wound up with a bronze medal in 31.66.

Things got back on track in the 100 back, where Hosszu swam a 1:01.08. She got a little bit of a push from another mainland swimmer: French 16-year old Laurine Del’Homme, from Paris, who was a 1:02.95, with Dzerkal taking 3rd in 1:03.82. Del’Homme is likely to be a significant player on at least France’s national level in the next few years, so she’s a good name to learn.

The women’s action then closed with a Hosszu domination to the tune of 2:11.43 in the 200 fly. That’s far from her own European Record time done a year ago, but it was enough to put her 6 seconds ahead of Dzerkal.

There were only 5 events on the men’s side, but Hosszu’s new 18-year old training partner David Foldhazi had almost as much success as she did, with three more gold medals on his day. He won the 100 fly in 55.44, to which he added wins in the 200 fly (2:01.25) and 100 back (54.67). With the presence of some young swimmers from the famed Olympic Nice Natation club in mainland France, those wins weren’t totally unchallenged by Foldhazi. In the 200 fly, for example, he was pushed by Nice’s Ambroise Petit, who was a 2:01.73 and is also just 18 years old.

In the 100 back, Pierre Yves-Desprez was a 56.18 for 2nd, and Hosszu and Foldhazi’s coach Shane Tusup, spurred on by his whim-to-silver 50 back on Friday, took 3rd here in 58.38. He’s officially the only American representative in this meet.

Among the other winners on the day was a 23.18 from Bradley Vincent representing the nearby island of Mauritius, with Foldhazi taking 2nd in 23.42 and Marquet 3rd in 23.62, and Hungarian Daniel Gyurta winning the men’s 50 breaststroke in 27.34.