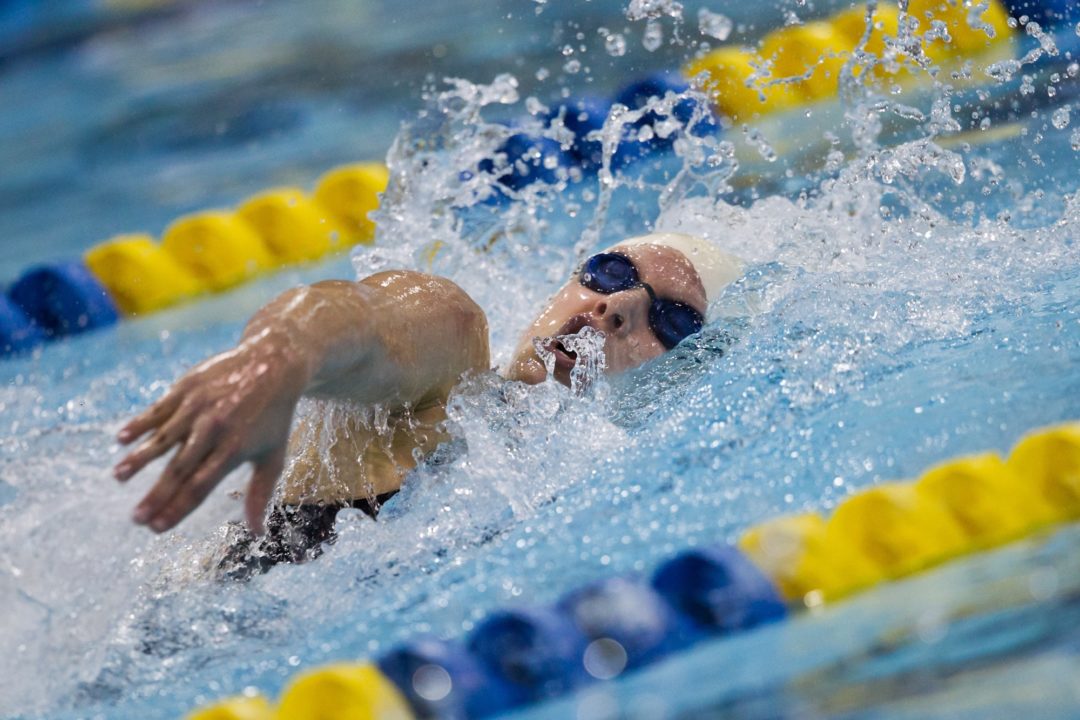 As the 2012 Phill Hanse Invitational wraps up from the University of Houston campus on Saturday, it has set a very high bar on the women’s side for the rest of the mid-season invites to live up to.

On the final night, Larson was gunning for more National Records, while the rest of the teams were looking to finish strong after everyone was loaded up on a lot of events.

Note that one team, the Texas A&M men, headed home before finals on Saturday. That was a bit disappointing as John Dalton had a good 44.8 in prelims of the 100 free.

McLaine was 2nd in this event, swimming a 16:04.52. For anyone who is questioning how much rest the Aggies have put into this meet to achieve the fireworks show that we’ve seen, McLaine is the answer: she was 8 seconds better last season at the mid-season rest meet than she was this season.

Arkansas under new coach Sean Schimmel has shown more of a sprint focus, but they still aren’t far removed from their distance roots either, Sophomore Lauren Jordan was 3rd in 16:15.03, followed by Chelsea Franklin in 16:25.95. The Razorbacks actually went 3rd-6th in this race.

LSU’s Craig Hamliton already had some impressive swims under his belt coming into the final session of this meet, including an event victory in the 500 free. As the races get longer, though, Hamilton gets stronger, and he posted a big time of 15:14.67 to run away from the field in the men’s mile.

Wyoming freshman Ryan Nelson was 2nd in 15:37.77, followed by his teammates Kevin Waller (15:53.53) and Joseph Ferreri (15:57.90). Those three go freshman-freshman-sophomore, again emphasizing the youth of this Wyoming squad.

A&M’s Tess Simpson has dabbled, quite successfully, with some butterfly swims this weekend in Houston. At the end of the day, though, she went back to her old primary event and won the women’s 200 backstroke in 1:54.25. That swim won’t make as many headlines as those of Henry and Larson at this meet, but it’s a second-and-a-half faster than she was this same weekend last season. Tack on another probable NCAA scorer for the Aggies if she can perform this well again at NCAA’s. This team’s depth is showing brighter-and-brighter as this meet wears on, an encouraging sign as they try to push into the top 5 at NCAA’s.

Not far behind her was SMU sophomore Isabella Arcila in 1:54.66. Arcila has been outstanding in the sprint events so far this weekend, but in this swim showed off a great 200 backstroke as well as she looks to fill the hole left by Therese Svendsen’s graduation. Arkansas’ Anna Mayfield was 3rd in 1:55.18: a new Arkansas School Record. The Razorbacks have set 5 school records so far this weekend.

A&M’s Claire Brandt, best known as a sprinter, is discovering new talents in college. She took 4th in 1:55.96, which is a full-second-plus better than she ever was in the race in high school. That’s a good lesson for young swimmers to learn from when they think they’re set into a certain event at the ripe old age of 18-years old.

LSU picked up their second-straight win on the day when sophomore Michael Young won the men’s 200 back in 1:46.54. With a trio of 27’s to finish his race, this swim was split about how the best in the country spread their races, so he’ll have to be happy with the result.

Former Cal Golden Bear, and current SMU Mustang, Nathalie Lindborg had a great first 85 yards to her 100 freestyle. She, however, specializes in the 50/100 freestyler, whereas Texas A&M’s Lili Ibanez is more of a 100/200 swimmer.

That little extra burst of endurance from Ibanez showed at the end of this race, as she pulled ahead over the last 8-9 strokes to win in 49.00. Lindborg came in just behind in 49.30.

Bosma is one of the swimmers who couldn’t get a spot at NCAA’s when A&M didn’t hit the qualifying times in the free relays last season; this meant that they had to assemble those relays out of swimmers who otherwise qualified but weren’t necessarily best-suited for the spots in which they were swimming. Her swim here shows the sort of compounding effect Ibanez’s return will have on the Aggies’ 400 free relay.

SMU’s Mindaugas Sadauskas became only the 5th swimmer in the country to go under 44 seconds this season by winning the men’s 100 freestyle in 43.98. That’s nearly-identical to the time he went at this meet last season

Wyoming’s Adam Kalms was again outstanding and took 2nd place in 44.17. followed by LSU’s Andrei Tuomola in 44.31. Those three have all been spectacular throughout this meet, and it was fun to see three of the stars end on a high note swimming in the same finals heat.

Breeja Larson, after breaking the American Record in prelims, was gunning to absolutely destroy it again in finals of this 200 breaststroke. She went out hard in 59.64, which was half-a-second better than her morning swim, but as she started getting into the back-half of this race her timing suffered just a little bit as she just missed in 2:04.93. For a swimmer who is as long and as strong as Larson is, the only thing that can possibly get in her way this season is the timing of her turns (by my count, she was under 50 strokes for an 8-length race, with lengths as few as 4 or 5 strokes).

She did ultimately become the first woman ever under 2:05 in this race twice, let alone twice in the same day.

Her teammate Ashley Mcgregor, another stud Canadian freshman breaststroker in the class of 2016, swam a 2:08.79 for 2nd-place. That’s the #3 time in the country this year behind only Larson and her fellow Canadian Kierra Smith of Minnesota. McGregor’s 100 wasn’t as good as this 200, but that’s not a surprise to many as she’s a significantly-better 200 breaststroker than 100 breaststroker.

Arkansas’ Nikki Daniels took 3rd in 2:10.73; that wasn’t a school record like she swam in the 100 (Yi-Ting Siow), but it was a personal best by 4 seconds. That time also ranks her 3rd in the SEC this year, behind only the above-two swimmers.

There was only one swimmer under two minutes in this 200 breaststroke, and no surprise it was another LSU Tiger, as junior Ricardo Alvarado-Jiminez won in 1:59.20.

His freshman teammate Gabriel Rooker took 2nd in 2:01.47, which is less than a second away from his personal best. Wyoming’s Mike McCormick out-finished SMU’s Nicolai Hansen 2:04.55-2:04.68 for 3rd.

Texas A&M’s Cammile Adams, after a long weekend of swimming very fast, came to her last individual event in the race that took her to the Olympics: the 200 fly.

She had a great swim to win in 1:53.97, and though it was a second-and-a-half slower than she was at NCAA’s last season, it was faster than anyone else ungraduated in the country was last season. That means that she’s still the favorite to win this title in March, and now has her A-cut in the bag.

Her teammate Caroline McElhany, who is one of the few swimmers in the NCAA that closes as well as Adams does, kept this a battle all the way to the wire. She took 2nd in 1:55.60, which was only half-a-second off of what she went at NCAA’s last season.

Of note, Idaho freshman Jamie Sterbis, who hails from South Dakota, swam a 2:01.59 to win the Consolation Final. That absolutely crushed the school record by 4 seconds.

LSU’s Frank Greeff added a second event victory to sweep the butterfly races at this meet with a 1:46.28 in the men’s 200 fly. That’s the third-best time in the SEC this season behind only a pair of Florida Gators.

Wyoming freshman George Eglesfield wrapped his meet with by far the best swim of his weekend, taking 2nd in 1:48.75.

The SMU women ended the meet just how they began it, by pulling off a minor upset in a sprint free relay. This time it was the 400, where Isabella Arcila (49.31 – better than her individual), Nathalie Lindborg, Monika Babok, and Nina Rangelova (48.82), all underclassmen, touched in 3:16.51. That was about half-a-second better than the Aggies’ A-relay who were a 3:17.06. There seemed to be no splitting of their primary sprinters this time, but even a true A-relay wasn’t enough to clip the Mustangs.

Wyoming took 2nd in 2:58.01, a swim that is a full second better than they were at their Conference Championship meet last season. LSU, though Greeff was finishing fast, came up a fingernail short in 2:58.03 for 3rd.