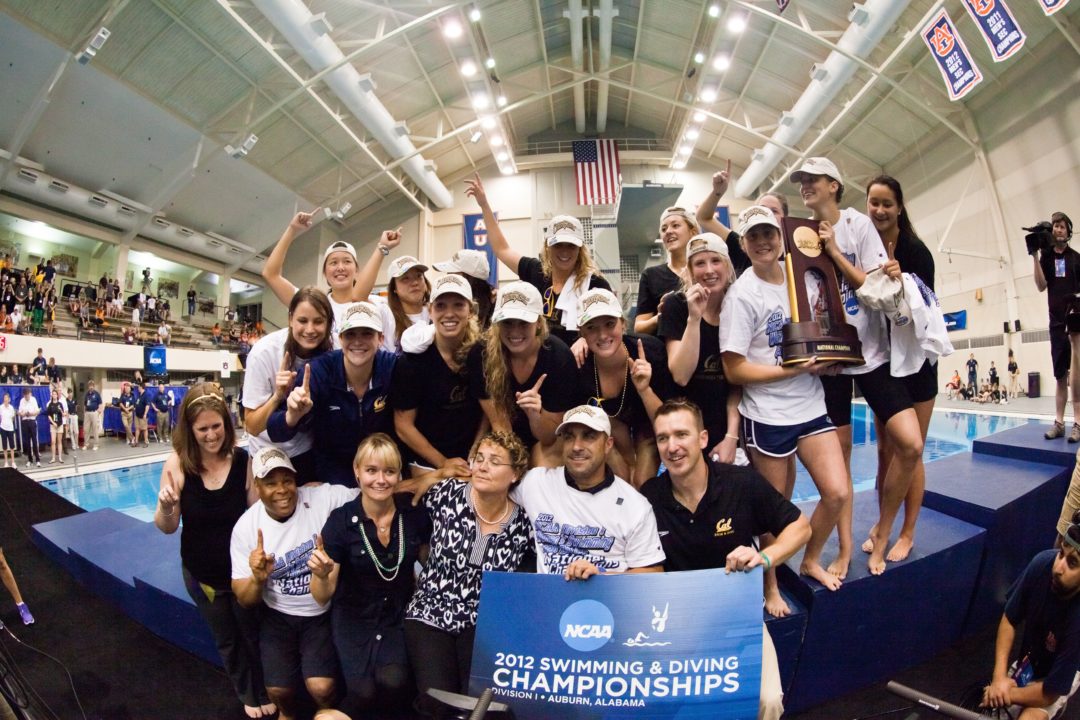 Nick Folker (front row, far right) was on staff for 7 NCAA Championship teams in swimming and water polo at Cal and is a Hawaii alumnus. Archive photo via Tim Binning/TheSwimPictures.com

The University of Hawaii has hired program alumnus Nick Folker as its new assistant coach. He will join the swimming & diving staff under first year head coach Elliot Ptasnik, who took over the program this offseason when Dan Schemmel left to become the new head coach at Stanford.

After his swimming career wrapped up, he served as the ‘director of aquatic performance’ at Cal from 2004 through 2013 where he worked with both the swimming & water polo programs as a strength and dryland coach. There he was a part of 7 NCAA Championship teams, including 3 with the Cal women’s swimming & diving team and 2 with the Cal men’s swimming & diving team. Since 2013, he’s worked with the strength & conditioning company that he co-founded BridgeAthletic as well as with Physmodo.

“Nick is a University of Hawaii alumni and swam for head coach Sam Freas who was a revolutionary sprint coach,” said head coach Elliot Ptasnik. “Between his experience as a student-athlete at UH, Olympic athlete, and director of aquatic performance at Cal, he is one of, if not the best in the world at connecting strength work to fast swimming. This is an incredibly huge addition for our squad, and we are extremely happy and proud to have Nick back in Hawaii.”

Good hire! What has Nick been doing since he left Cal?

” Since 2013, he’s worked with the strength & conditioning company that he co-founded BridgeAthletic and with Physmodo.”

But no coaching? Is this new job coaching sprinters or just the strength and conditioning part? My point was/is when has he last “coached”?

2013 Cal, then started his company

Dude – not sure who you are but Nick Is some one person any parent would be thrilled to have as a coach in any capacity. He coaches swimming, strength, and most importantly life. He was a powerful influence on our son Seth! We love Nick. You hide behind a user name! I will willingly tell you who I am! Great hire!