Harvard’s Schuyler Bailar Named to Out Magazine’s 2017 Out100 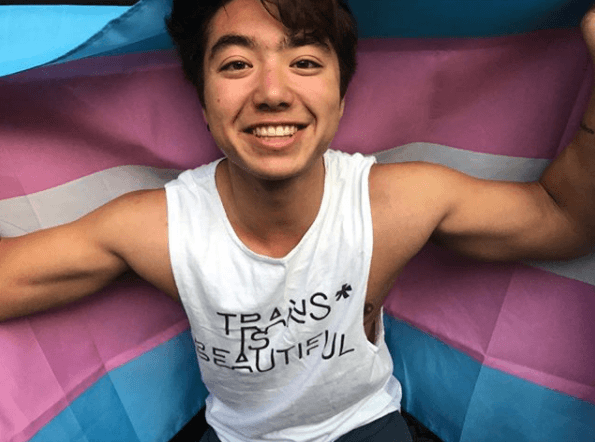 Harvard swimmer Schuyler Bailar has been named to Out Magazine's 2017 Out100, a yearly list of the most influential LGBTQ individuals. Current photo via Schuyler Bailar @pinkmantaray Instagram

Harvard swimming‘s Schuyler Bailar has been named to Out Magazine’s 2017 Out100 List. Bailar, a breaststroker and vocal trans rights advocate, is the first openly trans athlete to compete on an NCAA Division I men’s team.

Bailar is competing in his junior year at Harvard. Outside of the pool, he travels throughout the country giving speeches about diversity.

“When I was coming out, I searched everywhere for someone like me, but I found no one…” he told Out. “I want them to see a picture of me and think, He exists. I can, too.”

Out Magazine, one of the foremost LGBTQ publications in the United States, curates its Out100 list of the most influential LGBTQ individuals each year. Bailar is one of two athletes on the 2017 list; tennis legend Billie Jean King earned this year’s Out100 Lifetime Achievement Award.

As a recruit, Bailar, a member of an NCAP national age group record setting-relay, generated a lot of interest from Division I teams before landing with the Harvard men’s team under coach Kevin Tyrrell.

You can learn more about Schuyler in our SwimSwam profile from his freshman year, or you can watch his featured documentaries on 60 Minutes and The Olympic Channel.

I too have a hard time understanding transgenderism. My main issue with it is the fact the decision to go through this life/health altering hormone therapy (of which there is not enough research to determine long term effects) is often left in the hands of a 12-15 year old kid. I’m sure their parents have to sign off on it, but what happens if down the road after growing and maturing things change?

I am currently doing graduate level work in psychology and this topic has been brought up in my courses. Reliable research in this area (the preponderance of evidence, not just 1 or 2 skewed studies) reports extremely low “regret” rates. The general consensus is that SRS has a beneficial effect on patients. I just wrote a paper reviewing the literature on this subject. I will put it online once I have received feedback from my professors and edited accordingly.

It is also important to note that gender and sex are not the same thing. MOST transgender people never seek medical intervention to change their bodies. This is confirmed by a national survey of 28,000 people in the U.S. conducted by… Read more »

This is not swimming related.

Or perhaps the article posted earlier about the former swimmer arrested for cocaine possession? That’s probably not swimming related in your book, but you just haven’t had a chance to leave a comment saying as much, right?

I’m not sure if that is aimed at me or not, but yes that is another example of an article that I believe should be posted on this site even though it is not explicitly or 100% about swimming. I even enjoy hearing the stories about Grevers getting married to Annie Chandler, or other human interest pieces. In fact, I would like to see more of that. As a former NCAA All-American swimmer 10+ years removed, I like those stories because they make me feel still connected to the sport that was such a huge part of my life, and feel-good stories like this are more than welcome to this guy.

And to be clear, I meant the feel good stories in reference to the original article, not the cocaine one. Although I feel both are appropriate for the site to report on/post.

sorry for the lack of clarity…didn’t mean it directed at you…meant it directed at the OP. I think the article about cocaine possession and all the ones you mentioned are valuable. I was just pointing out that I think the OP’s comment has more to do with the subject of this article than some perceived “not swimming related” reason

Haha, I was drawing a blank on what term or phrase to use, but you found it!! Yes, they are Valuable!! I didnt want to say it was a positive thing, because some are negative things, but valuable is the perfect phrase. Thank you!

Swimmer- This is an article about a swimmer getting recognition. We write about swimmers. We have done plenty of articles about other swimmers receiving recognition or awards as well.

Someone show this guy the old Gary and Dave posts. Dude’ll lose his mind!

Lauren. Thanks for writing this article. Swimming, like the rest of society, has some folks that just can’t handle diversity or realities that are different. While I certainly cannot fully understand schuyler’s experience, I am glad he had the courage to be the person he feels he is inside. To those who find him sick or want to make him into a pariah, shame on you.

Hi David 🙂 I appreciate your comment! Hannah Hecht actually wrote this article. I just had some thoughts about some of the comments.

I want to have a reasonable discussion about this. I’m don’t think it is right to change your gender. I see it as living a comfortable lie. Isn’t it better to live in the truth and accept yourself for who you are?

Yes. Ignoring reality will not help them.

People have cosmetic surgery all the time. Lots of people. They do it to feel better about themselves I suppose. Maybe part of this is just that simple. So why would you single her out over all these other people. They need to have an avenue to compete and its good that sports have made an effort to accommodate them.

I would like to have a “reasonable discussion” about you getting suspended from other sites for sharing rape GIFs: 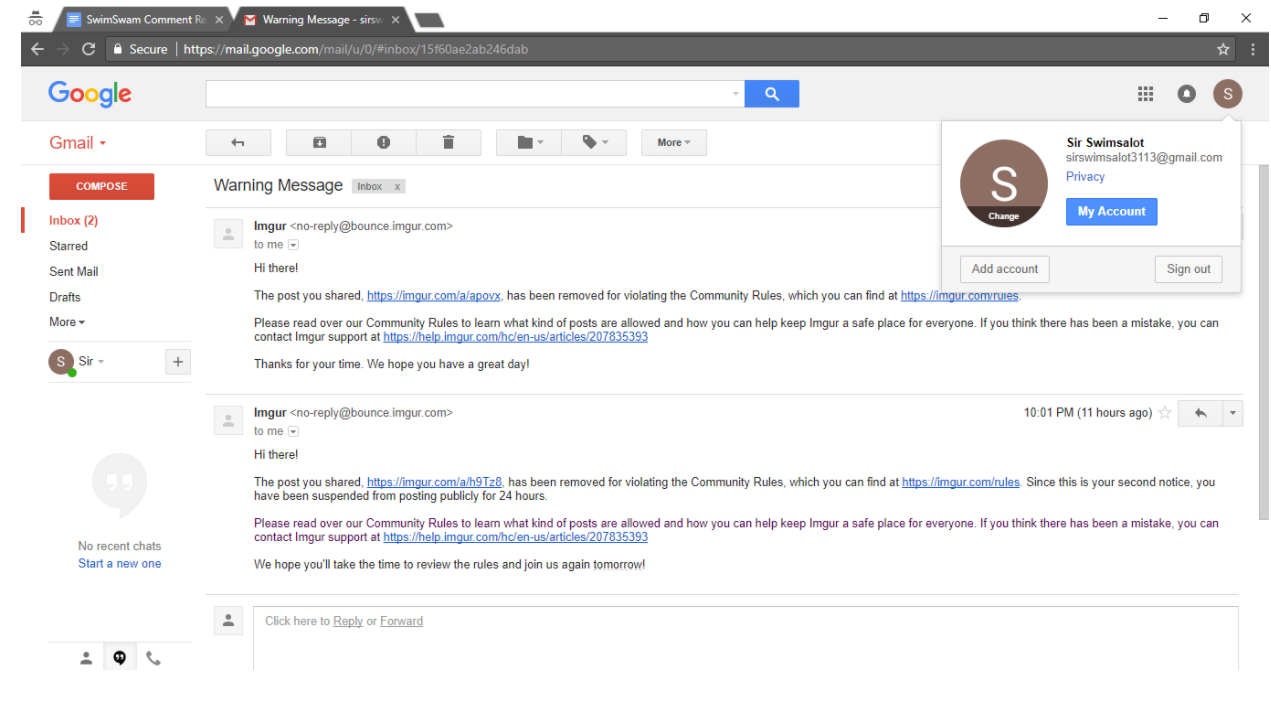 Lmao that’s crazy. How did you get into his gmail though?

Gee whiz that isn’t what you say it is. It’s a running joke on Imgur. Now I’ve deleted that account I never use, so you could stop snooping around now.

Do transgender people living a certain way affect you in any way? Why don’t you just live and let live

Better according to whom? You?

I think it’s better to live your life the way you want to live it and not pass judgment on the way other people want to live theirs.

“Comfortable?” I don’t know that I would call the trans experience that. Hormone treatments, surgeries, poor treatment from society, etc. I imagine that my life as a cis male is much more comfortable than Schuyler’s in many respects. Good for Schuyler, I can’t imagine this is the easy path.

Congrats Schuyler. Hope you have a great year in the pool.

What happens when an athlete born male (with XY chromosome) but later identify himself as female and undergo sex change surgery.

Will she be allowed to compete as female even having XY chromosome?

SchoolingFTW – most of the world’s sporting organizations have standards in place for this now. The specific answer to your question will depend on what level and what sport you’re asking about.

In the case of schuylar baylar, I don’t feel it is fair that he has to compete against XY chromosome athletes.

I don’t know what the solution is. Maybe create separate categories?

this dude gonna make NCAAs? never heard of him

Not the point. You are clearly trying to “take a shot” at him so please keep your caveman-esq comments to yourself, and try to educate yourself so that you can actually understand the significance and positive impact that this individual is having on SO MANY lives.

Congrats Schuyler, keep on blazing and being an inspiration to so many!!!

“Educate yourself” on basic genetics 2 cents. She is NOT male.

“basic genetics” once suggested that Africans were not fully human…but hey, if one wants to use outdated science in a constantly changing field to create a reductionist argument, then go for it I guess.

Please don’t parallel the plight of Africans and African Americans in this country to those of someone who thinks they can become the opposite sex. It is disrespectful to all black people and all of the black people who lost their lives solely because they were black. Thanks

I wonder if the black people who identify as trans would agree with your sentiment?

Nah , XX and XY chromosomes is not outdated science. It,s reality imo.
Pumping hormones into the body of a perfectly normal human is outdated pseudo science.

Google is your friend here – for starters do a little reading about XX male syndrome and Swyer syndrome, and then come back and we can talk about how things don’t fit into one of the two boxes you’d like to place them in…

Sir Swimsalot- Why is it so hard for you to be respectful of another human being? Schuyler Bailar has done nothing to harm you. In fact, he has been nothing but helpful to other people because he serves as a positive example for those who face similar struggles. If you think it is wrong to be transgender, then don’t be transgender. But you shouldn’t get to dictate how other people live their lives, what name they use, whether they identify as a man or woman, etc. Especially when it does not affect you.

Lauren, please understand I am not trying to control every aspect of Schuyler’s life. Everyone is free to undergoe the procedure should they want to. I just see it as self-harming and wrong. For instance, a person can decide to drink fifty Red Bull’s in a single day, and I can say what that person is doing will hurt them, but in the end he is free to do as he pleases.

I do care about this subject so much because it is one of many societal changes we have been experiencing lately that pushes for moral relativism, feelings over facts, truth is relative, etc.

Have a great day Lauren!

she is my hero

Ooops my very bad!! I meant no disrespect. He is my hero!!!