Hanser Re-Emerges With Top Seed in 100 Free in Canet; Ervin and Adrian Chasing 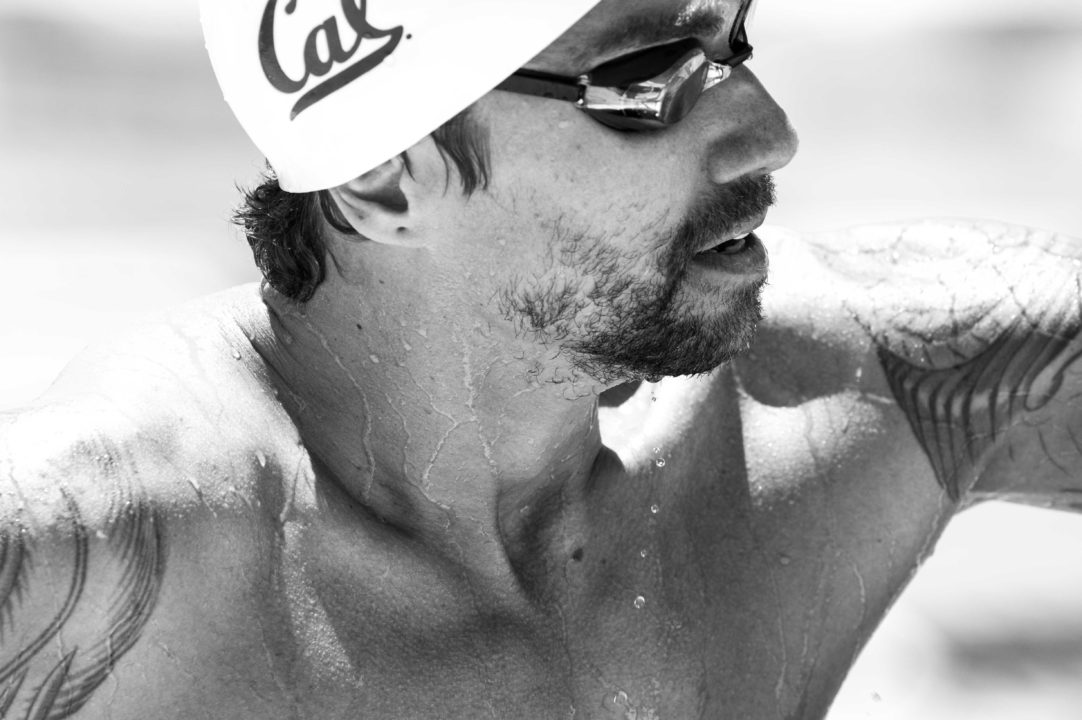 Cal Golden Bear Anthony Ervin had the fastest morning swim in the 100 free, though it took as much to even get him into the final. Archive photo via Mike Lewis/Ola Vista Photography

British Swimming revealed some changes to the annual Glasgow International Swim Meet, including a name change to ‘Glasgow Swim Meet.’

On the heels of British Swimming announcing its initial Olympic roster, the organization has also just revealed the lineup for May’s European Championships.

On day 2 of the second stop of the 2014 Mare Nostrum series in Canet, France, the men’s sprint freestyles were again in focus.

Cuba’s Hanser Garcia, an incredibly high-potential guy who has slipped back off of swimming radars over the last year, took the top seed in 49.11. That’s half-a-second faster than anybody else in the field went in prelims.

Still, he will be in a battle to even finish in the money with a top 3 placing. The 2nd seed is Japan’s Shinri Shioura (49.61), and in 3rd is American Nathan Adrian (49.68), who showed over the weekend in Monaco that his prelims swims in the 100 free are little compared to what he’s capable of in a finals swim.

The other swimmer who will battle Garcia for the event win is the other American, Anthony Ervin, who actually wound up with the day’s best time to this point. He was a 49.92 to tie for 8th place with Belgium’s Emmanuel Vanluchene, but in the swim-off, Ervin was a 48.9 to get into the final.

Otherwise on the men’s side, Canadian Jeremy Bagshaw holds the top seed so far in the 800 free with an 8:06.99 and the fast heat still to go.

Junya Koga is the top seed in the men’s 100 back going into finals, swimming a 54.92. That put him ahead of American Ryan Murphy (55.47) in prelims, but lurking back as the 4th seed is Monaco winner Ryosuke Irie (55.62). Irie’s presence in this race means that it will take at least under a 54 to win.

After a 1-2 finish in the 50 breaststroke on Wednesday, the British men are back out in front in the 50 too, with Adam Peaty as the top seed in 27.51 and Ross Murdoch 2nd in 27.84. Murdoch is historically a little bit of a better 50 breaststroker, and after winning the 100 he’ll have confidence, but Peaty is beating on the door of his lifetime best and will have that motivation behind him.

Those two will get an even greater challenge in the finals today; Russia’s Andrey Nikolaev is the 3rd seed in 27.85, followed by Andrew Wetheritt (27.96), and a handful of other guys a tenth behind that.

Another Danish Record, the 3rd of this meet, went down in the men’s 200 fly. Viktor Bromer swam a 1:57.60, which just cleared his own lifetime best of 1:57.67 as the Danish National Record. He was very close to the mark in Monaco, but has now ducked under.

He’ll have a good competitor to race in finals with Poland’s Pawel Korzeniowski looking very good en route to a 1:57.65 in prelims. Korzeniowski was out a full second faster than Bromer at the 100, so that should give the Dane a good rabbit if he wants to take the record even lower. There was no swim from defending World Champion Chad le Clos in this race, as he’s scratched the meet after a tough first session on Wednesday, apparently battling fatigue from some really heavy training.

On the women’s side, the 100 free saw the top 6 swimmers all go better than 55 seconds in a stepped-up final as compared to Monaco.

For example, American Natalie Coughlin was a 54.86 in prelims of the 100 free at the last stop of this tour, and that got her a 2-seed. Here in Canet, she was the same prelims time, and it earned her only the 6th seed.

Ahead of her is Denmark’s Pernille Blume, who has consistently swum well this week, in 54.40, followed by the Russian Record holder Veronika Popova in 54.45.

France’s Camille Muffat didn’t swim that race, and instead is saving her energy for the 400 free, where she’s the top seed in 4:10.14 and will fight off Welsh swimmer Jazz Carlin (4:10.14). Expect times to drop four-or-five seconds for the winner in finals. That’s a loaded final as well, with among others, Prinsloo doubling up on the 100 free.

Mie Nielsen might not join the Danish Record crew at this meet after a 1:01.18 in prelims, but that does make her the top seed headed for finals. Georgia Davies (1:01.21) from Loughborough in the UK and 50 back winner Etiene Medeiros (1:01.39) are with her in a grouping of the top three seeds. Russia’s Daria Ustinova is not far back in a 1:02.14.

Another Danish swimmer, Rikke Moeller-Pedersen, took two top seeds in prelims, about 90 minutes apart. First came the 50 breaststroke in a 31.87 ahead of Israel’s Amit Ivry (31.92) and American Katie Meili (31.94). Later, in Moeller-Pedersen’s specialty event, the 200 breaststroke, she was a 2:25.55 for another top seed. Japan’s Kanako Watanabe, who was a scratch from the 100 yesterday, is the second seed here in 2:26.24.

Ottesen, who broke the Danish National Record in the 50 free and 100 fly on Wednesday, is a full second away in the 50 fly after prelims with a 26.30. Given what we’ve seen from her already, however, expect her to be much, much closer in the evening session.

In the 200 fly, another name is emerging in what has been a recently-deep line of British 200 butterfliers. 24-year old Alys Thomas swam a lifetime best of 2:10.46 for the top seed, which is half-a-second faster than her time from British Nationals in April.

Speaking of countries with depth in the event, the 2nd seed went to China’s Shuang Li in 2:10.66. Olympic finalist Cammile Adams (2:10.68) from the United States is the 3rd seed.

Ervin 49.92 to tie for 8th then comes back a short time later with a big drop at 48.9 in the swim-off. Almost held back a bit too much in prelims, eh? But the Cal guys in general seem to have that tactic working for them and down to a science. Adrian won a 100 free NCAA title out of lane 8.

Adrian will emerge in final for sure ; Ervin could surprise nontheless .

Didn’t Hanser Garcia go around 48 flat in London despite his technique and turns? He could easily go around 47.8 I reckon.

Hanser did go 48 flat at London with the extremely poor start and turns that he does, but that’s only half the story with him.
I’ve been saying this for a long time, if Hanser learns how to coordinate his kick and pull correctly that he could do things we’ve never seen before! If you go back and watch the video of that race, around the 75 mark for about 1-2 seconds they do an underwater shot of Adrian and you can see Hanser in the background in the lane next to him. If you watch, he takes about 3-4 strokes and does about the same amount of kicks. The guy literally has a 2 beat kick! And his… Read more »

Ervin 48.9 in the swim off! Adrian is just baiting the field again. He’s the 2nd best in season freestyle after Mags. 48.4 in the final for the win.