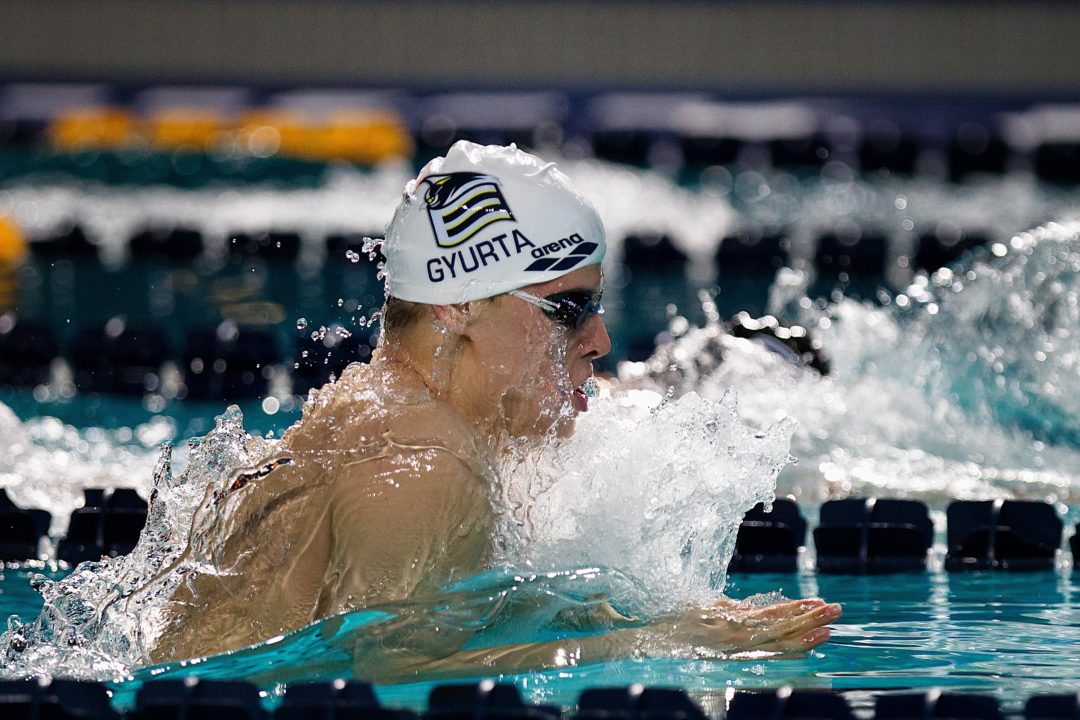 The Netherlands’ Nyls Korstanje led a trio of record-breaking performers during tonight’s semi-final of the men’s 50m butterfly.

After a sleepy morning session on Thursday, the finals went at a much improved pace, with a slew of World-ranked times being posted. As has become the norm, a lot of swimmers tied or broke National Records as well: England, Greece, Lichtenstein, Norway, Israel and Sweden were the culprits on day 4. But the highlight of the session was a third Championship Record, this one at the hands of Daniel Gyurta.

Even beyond him, the home team continued to star in the meet, winning the first three finals of the day, and tagging on a fourth later in the session.

The Hungarians began a very strong home affair with their 3rd individual European Title of the meet following a win in the 800 free from 19-year old Boglarka Kapas in 8:26.49. That’s the second-best time of her career (behind last year’s World Championship final) and is another big step in the progression of a young swimmer with Olympic medal potential. She actually put a big negative-split into this race, opening in 4:14 and closing in 4:12 – the latter being faster than she closed in Shanghai. That says she’s definitely got a taper left in her.

The negative-split was the name-of-the-game for this group of swimmers who were unlikely on full tapers, as the top four all pulled it off. The silver medal went to France’s Coralie Balmy in 8:27.79 (her best time since 2009); Hungary put another swimmer on the medal-stand with Eva Risztov taking bronze in 8:27.87. She actually sat second, just a fingertip ahead of Balmy, for most of the end of the race, but in the final 50 meters, Balmy crushed it, while Risztov couldn’t hold on.

Lichtenstein’s Julia Hasler, who just turned 19, was 7th in the final and well out of the medal hunt, but her 8:38.18 crushed her own National Record in the event, for the fourth time this year.

Hungary’s Katinka Hosszu completed a sweep of the IM titles with a 2:10.84, using her unparalleled consistency (in Europe at least) to lead wire-to-wire. That swim is her best of the season, but still leaves her ranked 8th in the world this year.

In a story that she’s seen before thanks to big college battles with Caitlin Leverenz, Hosszu was nearly run down in this 200 IM by a great breaststroker – Britain’s Sophie Allen. Allen went from a distant 5th to a slim 2nd (four-tenths back at the final turn) on that one leg, but ultimately could bet no closer. She touched 2nd in 2:11.49. Though she couldn’t run down Hosszu on the final 50, Allen still has to be happy with that closing split of 31.13. This swim breaks her own English Record in the event, set earlier this year at British Trials.

For the second-straight event, Hungary put a second swimmer on the medal stand, with Evelyn Verraszto finishing 3rd in 2:11.64. Germany’s Theresa Michalak was 4th in 2:12.26, passing Sweden’s Stina Gardell in the final 50 meters.

Gardell swam a 2:12.29 for 5th, which ties her semi-final time as a new Swedish Record in the event.

Hungary’s Daniel Gyurta is a swim coach’s worst nightmare. His stroke goes against every modern theory of what a perfect, smooth breaststroke should look like, and is best described as “ugly”. That is except for one area: the ability to close. Gyruta closes like few other in the world do these days in jammers, and he did that again here with a 2:08.60 to cut three-tenths off of his 2010 Championship Record in the race and defend his title. That swim also ranks him 3rd in the world this year.

But maybe that’s the key to breaststroke that we’re still trying to understand – we don’t really know how it works, we’re just shooting in the dark until we find something that clicks for each swimmer, and Gyurta has found something that works extremely well for him. He has what most would term “terrible technique,” but is still the best in the world.

Gyurta sat third at the halfway mark, but by the time he hit the final touch-pad, the race wasn’t that close for the defending World Champion. He now holds every possible major title in this event since the last Olympics (2009/2011 LC Worlds, 2010 World SC, 2010/2012 LC Euro, 2009/2011 SC Euro). With that kind of success, how could you pick against him? The finish is the only thing that can get him, because of the way he swims breaststroke, his finishes aren’t always the cleanest in the world as compared to a Kitajima with super-quick hands.

Germany’s Marco Koch moved to 4th in the World Rankings, finishing for silver in 2:09.26. That’s the second week in a row that he’s had a great swim in this 200 along with German Trials, and he certainly seems to have the talent to get to a 2:08 in London.

Greece’s Panagiotis Samilidis took bronze to break the Greek National Record for the second-straight swim, and his 2:09.72 made him the first swimmer from his country to ever go under 2:10 in this event. For the 18-year old, that knocked almost a full-second off of his record-breaking mark in the semi-finals.

The Germans are still looking very good in this meet a week after their Olympic Trials, and backstroker Jenny Mensing continued that trend with a 1:00.08 in the women’s 100 backstroke. That gives Germany a 5th gold medal and 10th overall medal of the meet to keep pace with Hungary’s onslaught.

Italy’s Arianna Barbieri was second in 1:00.54 with an outstanding opening 50 of 29.20 (she has to become the favorite in that final). She wasn’t able to match her National Record from the prelims in the latter two rounds of this event, but this meet was still a big step forward – and one that Italy needed as they have a severe backstroke deficit.

The Czech Republic’s Simona Buamrtova took the bronze in 1:00.57, and the Ukrain’es Daryna Zevina was 4th in 1:00.59. France’s Alexianne Castel, winner of the 200 back, was the second-fastest qualifier for this final, but scratched.

Just like we saw him do in the early rounds of the 200 IM, Hungary’s Laszlo Cseh conserved a ton of energy through the early rounds of this 200 fly, but unleashed upon the final – to the tune of a 1:54.95 – ranking 3rd in the world in 2012. That’s the best time he’s been outside of Beijing by a second. Cseh is once again stepping up bigtime in an Olympic year.

His countrymate and understudy, teenager Bence Biczo, was 2nd in 1:55.85 – about what he went in the semis, and a good mark for him. He won’t be a medalist this year, but if he can final, it will be an important step up for him.

Ioannis Drymonakos very nearly took down the second Greek Record of the meet with a 1:56.48 for the bronze. That missed his own national mark set in 2007 by just .01.

Austria’s Dinko Jukic, relieved after being cleared for a refused drug test in October, placed 4th in 1:56.53.

Israel’s Jonatan Kopelev broke the second Israeli National backstroking of the meet with a 24.73 for the gold – also moving him into 12th on the all-time list and 2nd in the world this year. Between him and teammate Yakov Toumarkin, bronze medalist in the 100 back (and the other record-setter), the Israeli’s have a lethal young competition, not to mention the relative veteran Guy Barnea, who was tied for 3rd in this race at 25.14.

Also in this race, Norway’s Lavrans Solli rebroke his country’s National Record with a 25.28, which also breaks the Nordic Regional Record. The previous mark coming into the meet was held by Denmarks Mathias Gydesenin 25.44.

The first three legs of the Italian relay swam as well as they ever have, with Alice Mizzau (1:58.67), Alice Nesti (1:59.50), and Diletta Carli (1:59.40) were all at-or-better than their fastest flat-start swims already. Then they handed off to the dominant one – Federica Pellegrini – who just blew away Hungary’s anchor Katinka Hosszu on the anchor with a 1:55.33 to charge the Italians to a win in 7:52.90. This has been a race that she’s been reluctant to go all-out for in the past, including only splitting a disappointing 1:58 at last year’s Worlds in prelims. But with this group showing how well they can swim – this time would have put them right in the thick of a top-4 finish last season – she’ll have to be motivated in London. This swim all-but secures their spot at the Olympics.

I went online and watched some videos of Gyurta swimming breastroke, and I disagree that his stroke is ugly. In fact I would go so far as to say that he has a nearly ideal technique for the 200-distance. If you watch him in comparison to most of his competitors he streamlines much better between each stroke. Most breastrokes are taught these days to “kick into their pull” and to anchor their hands midway through each stroke cycle relying on their cores to do a lot of work. This is undeniably faster. Gyurta’s stroke is much more choppy because he actually spends a longer time kicking into a glide, but this allows him to save a lot of energy for… Read more »

Totally agree: you just can’t tell a “good” breaststroke from a “bad”. In any given final, all 8 swimmers will be doing something different. Streamline and ankle flexibility being the only common denominator.
Way back when, Maria Lenk swam a mix of breaststroke/butterfly (she did until her final days in master’s competition).
Then, in the 50’s/60’s the japanese were swimming most of the race underwater.
There was the “wave” by Santos and Barrowman.
My personal favorite was the wide-pull, flat in the water (Sludnov, Jones).
Then there is the efficiency from the likes of Moses and Kitajima.
The most beautiful technique ever is Amanda Beard’s!! It doesn’t hurt that she is also the most… Read more »

As much as can be said that Allen had a great breaststroke leg, her backstroke was worst..

Back to the technique comments: all of Cesh’s styles are “ugly”.

And did you guys see Schreiber’s start hand position on the 100m free? She had her arms back, as if she were to do a “roll” start in a relay. That was something I used to do when I was an age-group swimmer..