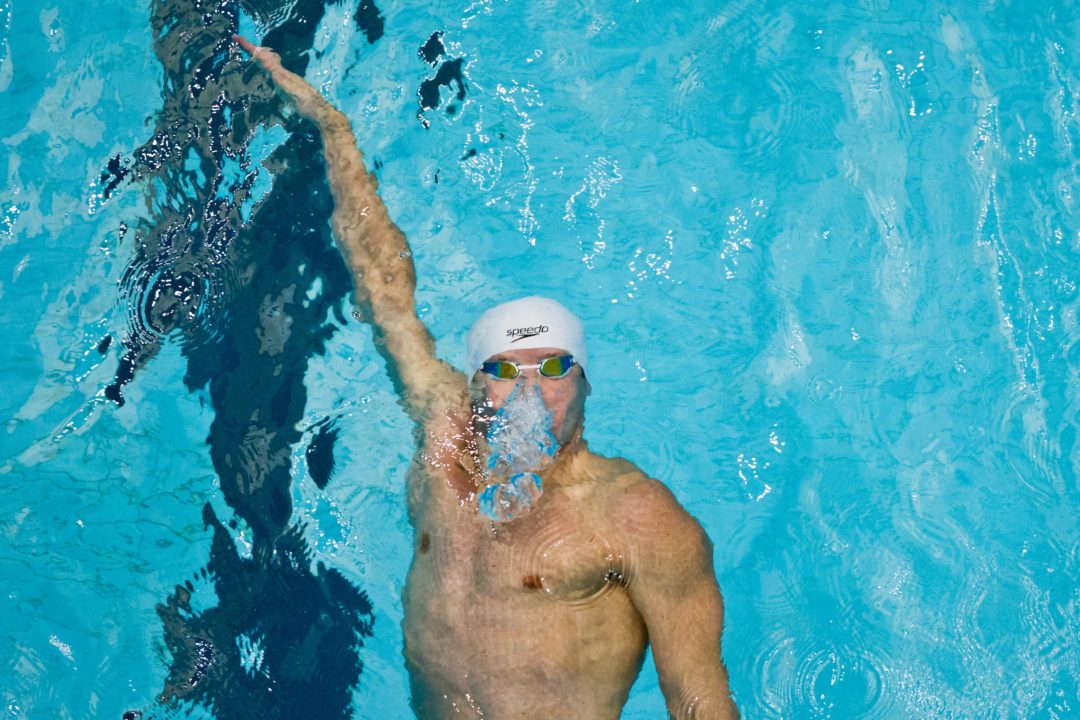 Chuck Warner is the author of  “…And Then They Won Gold.” He has spent a lifetime studying the details behind what it takes to achieve swimming excellence.

In every swimming pool on earth that is set up for competition, each regulation lane line has a special mark in a distinctive color at exactly 15 meters from each end of the pool. That mark restricts how far a swimmer can travel underwater. Even backstroke flags are set differently in yard pools than meter pools but EVERY pool course has a categorical rule of a “15 meter limit” that you can travel underwater. If you exceed it, you are disqualified. What is behind this unusually rigid rule to limit the distance a swimmer can travel? Dave Berkoff.

In the years leading up to the 1988 Olympics this 5’10” tall, 155 pound backstroker from Harvard was trying to work his way up the ladder in NCAA competition. One of the tools that he used was developing his underwater dolphin kick. By 1987 Dave was ranked in the world, but not very high, with his best time of 56.7 in the 100-meter backstroke. But just like his “Berkoff Blast” off the starting blocks in which he traveled 32 meters underwater, his whole swimming career exploded during that Olympic year.

In 1989, FINA (the international governing body for swimming) made a rule that limited the distance a swimmer could travel underwater to 15 meters, but only for backstroke. Dave’s impact led to a rule limiting swimmers because he had no limits. Relatively few swimmers today have changed their swimming in even a small way to take advantage of their dolphin kicks. They also haven’t recognized the way Dave changed the sport. (In the second chapter of “…And Then They Won Gold” we chronicle Dave’s career to recognize and learn from his contribution.) Dave Berkoff should be a Legend in the sport of swimming.

A Legend around Rutgers University is Michelle DeFreese. She chose David’s path. She started as a sophomore transfer student to RU with a best collegiate time of 1:00 in the 100-yard butterfly. Then Michelle made a commitment to underwater dolphin kicking. Her decision was to stay underwater six kicks on every push-off in every butterfly and kicking set in practice. Over time, this trained her body to function at nearly 100% of capacity despite missing some air by staying underwater longer than she was accustomed to. Gradually she developed her speed while she was underwater, especially at the end of the season. In her first six months with her new team she swam a time of 57.0 (100 yards) and broke a plateau that went back to high school when her best ever time was 59.8. The result was a large, beaming, proud smile that covered her face. She worked all summer at training hard and smart ──and staying underwater six kicks on every butterfly and kicking set. The result was 1:03 for 100 meters. The next winter she swam a 53.5 in the 100-yard butterfly and two years later 1:00.0 in the 100 meters.

Michelle’s incredible improvement in a short time is part of the reason she’s a Legend around Rutgers. Another part is she only stands 5’ 4” tall and is African-American with a little Cherokee Indian mixed in. She battled physical limits and, from her perspective, even ten years ago, a less than welcoming swimming community because of her racial heritage. At the 2004 Olympic Trials Michelle finished 11th in the 100 meter butterfly narrowly missing the final eight swimmer final and is still upset she didn’t make that Olympic Team. Dave Berkoff opened the door to innovation to show her how to break through to a new level of swimming. Michelle walked through it.

What are your limits? If Dave traveled 32 meters underwater on his backstroke start can you train yourself to travel less than half the distance he did? Everyone doesn’t have the same natural gifts to be a great dolphin kicker but coaches and swimmers can work together to discover what’s possible. You might even be surprised to find out the results. Here is what Dave did to the competition at the 1988 Olympics leading off the 400 Medley Relay for the USA:

…Skip Kenney’s retirement has brought interest and praise from many in the world of swimming for all the Legendary achievements of his athletes and teams at Stanford. Skip was also a terrific age-group coach, playing an important role in developing 1975 Sullivan Award Winner (the greatest amateur athlete in the United States), Tim Shaw. Tim has glowing praise for how much fun Skip made swimming when he was 11-12 years old while he learned to get the work done.

…Last Thursday night Coach George McMillion was inducted into the SMU Athletic Department Hall of Fame. Swimmers packed 21 tables for their Legendary coach. There was a similar outpouring when “Coach Mac” was inducted into the ASCA Hall of Fame several years back. Few mentioned the fact that his teams finished in the top 10 at the NCAAs in 14 or his 17 seasons as head coach. Coach Mac has become a Legend because of the man he is, his devotion to his ‘boys’ and more than 60 years as a part of SMU Athletics.

…more and more women are moving into recognized leadership in elite coaching of the sport of swimming. 2012 Head Olympic Coach Teri McKeever is currently at the head of that line. A Legend in the making? It certainly seems that way. Teri’s coaching blossomed when she decided to stop imitating others and start coaching “her way…” Teri has since learned that an “imitator” can only be second best to the one they are imitating.

Now , we can see why Phelps , Caughlin, Lochte are so strong in races ….they adapted what berkoff has innovated back in 1988 : the Dolphin Kick . Ryan has that amazing training and ability to go 15 meters underwater after most of his turns on the 200 back . He won last year in Shangai on the 200 free partly thanks to his amazing underwaters . The Italian commentators of his swims were totally amazed to see how efficient it is . In the 800 free realy in Shangai , on the the last 2 turns , the french didn’t have a single chance against Lochte ‘s subaquatic monstruous turns . Thank you Berkoff for this heritage

I truly remember that backstroke blast off from Berkoff . owesome ……