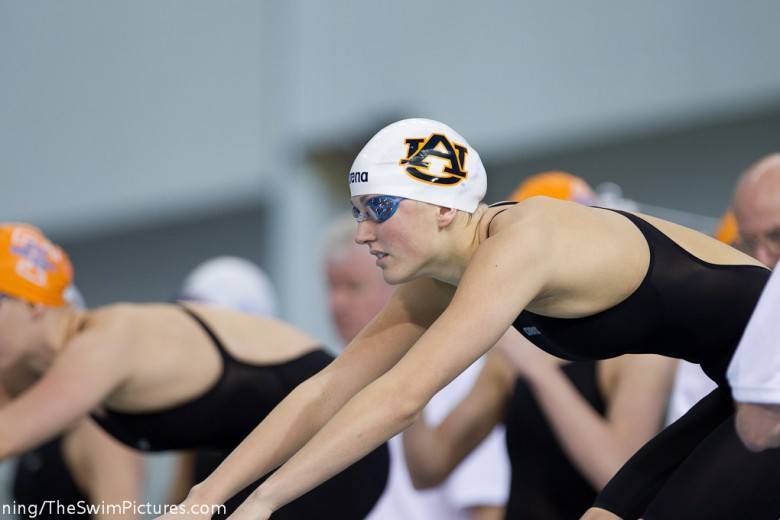 Lauren Norberg will have some company in the Auburn breaststroke lanes next year. (Photo Courtesy: ©Tim Binning/TheSwimPictures.com)

The Auburn Tigers have been dominating the recruiting and transfer headlines late in this season, and they’re not done yet.

The women’s latest signings are Philippa ‘Pippa’ Cochran out of the UK and Tryshia Centeno-Rosa, a transfer from Junior College powerhouse Indian River. They’ve also added Valerie Inghels from France.

Cochran is an elite sprint breaststroker from Millfield, just north of England, who at only 17, put up a 1:10.95 to make the semi-finals at this year’s British Olympic Trials. She was a bit faster (1:10.67) at the end of April. That would convert to somewhere around a 1:01-mid in yards. That time in long course is equivalent to the numbers that  Georgia commit Annie Zhu has put up this season at the same age, for reference.

She hails from the same club as Auburn men’s freestyler James Disney-May, that is coached by Jolyon Finck, who was one of Brett Hawke’s old club coaches in Australia, so the ties to the program are strong.

Centeno-Rosa is a transfer from Indian River State College, and is the defending Junior College National Champion in both the 100 breast (1:01.81) and 200 breast (2:14.48). That 100 mark is a NJCAA record. She added a third victory in the women’s 200 IM with a 2:01.20. That IM will be as important as her breaststrokes if she continues to develop – their only NCAA qualifier in the event last year was freshman Sarah Peterson.

Just like we’ve seen recently in their backstroke group, Auburn is now building big-time depth in their breaststrokes as well; these two signings should create a great competition between Centeno, Cochran and returning breaststroker Lauren Norberg, who split as fast as a 59.45 for the Tigers’ medley relay at NCAA’s last year.

Inghels is a 17-year old butterflier from France, who semi-finaled in the 100 at her country’s Olympic Trials. Her best time in long course is a 1:02.51 at the Belgian Championships, just days before her French version started in 1:02.51. She’s been about as good in short course as long course to this point in her career, as well.