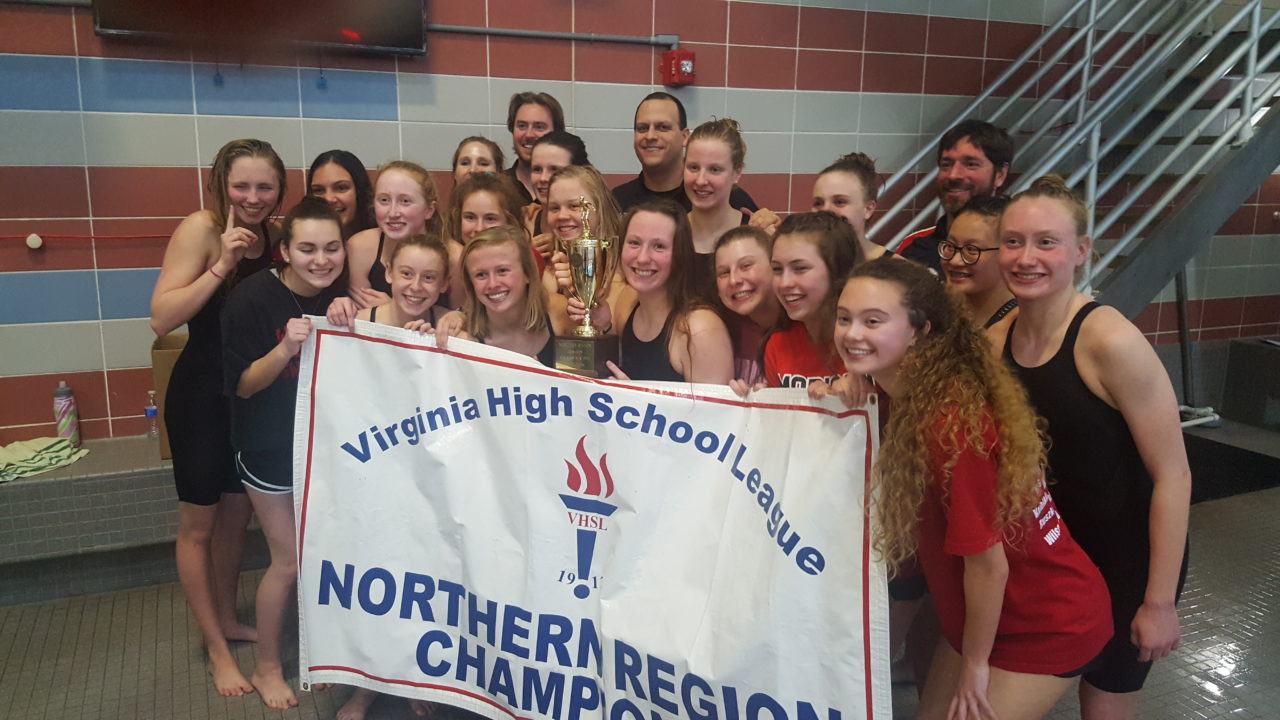 The James Madison girls followed up on their VHSL Northern Region championship with their 3rd-straight title at the state level. Current photo via Matt Rees

The state of Virginia has had a long history of swimming success, boasting Olympic gold medalists Tom Dolan and Jeff Rouse, among others. Perhaps buoyed by the success of superstars Michael Phelps and Katie Ledecky, both natives of neighboring Maryland, as well as a thriving club program that includes NCAP, one the largest and most successful club teams in the nation, the state seems to have to kicked into overdrive over the past 5-10 years. Virginia swim fans have been able to watch kids like Andrew Seliskar, Townley Haas, John Shebat, Janet Hu, and Cassidy Bayer set national age group records, make the U.S. National Team, and go on to help college teams win national titles.

If the VHSL Class 6 meet was any indication, it looks like the state’s pipeline of top-notch swimmers is in good shape, as we got historic performances from a pair of sophomores, as well as spirited team battles that resulted in the Oakton boys and James Madison girls taking the team titles.

The Oakton Cougars continued their run as one of the strongest teams in the state of Virginia, winning the VHSL Class 6 Championships behind wins from Anthony Grimm, Daniel Gyenis, Nick Highman, and a pair of relays.

Gyenis, a UVA commit, set a new 6A and state record of his own in the 500 free, winning in 4:24.42 after taking 2nd in the 200 free earlier in the session. Oakton also got a win from Highman, a Lehigh commit, who came out on top in an incredibly close 200 IM to defend his title in the event.

With Grimm only getting to swim one individual final, Cason Wilburn was the only boy to win two individual events. Wilburn, a First Colonial senior and Notre Dame commit, won the 200 free with a 1:35.93, setting a new 6A state record, and just a bit off of the overall state mark of 1:35.76, set by current Cal senior Andrew Seliskar in 2015. Wilburn came back to win the 100 fly in 48.12, another 6A record. Wilburn swept the 50 free and the 100 free at last year’s meet.

While First Colonial’s relays weren’t in the hunt for team titles, Wilburn still managed to throw down some strong splits. He was the only boy besides Grimm to go sub-20, splitting 19.77 (prelims) and 19.89 (finals) anchoring the 200 free relay, and going 44.40 anchoring the 400 free relay in prelims.

This was Oakton’s first state championship since 2015, when they were led by John Shebat, who will be a senior at Texas this year as the Longhorns look for their 5th-straight NCAA title.

In just about any swim meet, but especially at a high school state championship, sometimes the team title is more about depth than about eye-catching swims. In this case, James Madison had enough depth to narrowly beat First Colonial, 212 to 208, and earn its 3rd-straight title, despite only winning one event.  That event was the 100 breast, which junior Anna Keating, a UVA commit, won in 1:01.26, setting new 6A and state records.

Yorktown came in 3rd place, thanks largely to the show put on by sophomore Tori Huske. She dropped a 51.29 in the 100 fly, setting a new national high school record, and also won the 50 free in 21.95, setting new 6A and overall state records. That time is also only three-tenths the national high school record of 21.64, held by Abbey Weitzeil, and Huske still has two more years to break it.

Kellam’s Nicole Venema was the other individual event winner, setting a new 6A record in the 100 back with a 49.68.

ANTHONY GRIMM IS THE FATHER OF VIRGINIA

*father of the universe