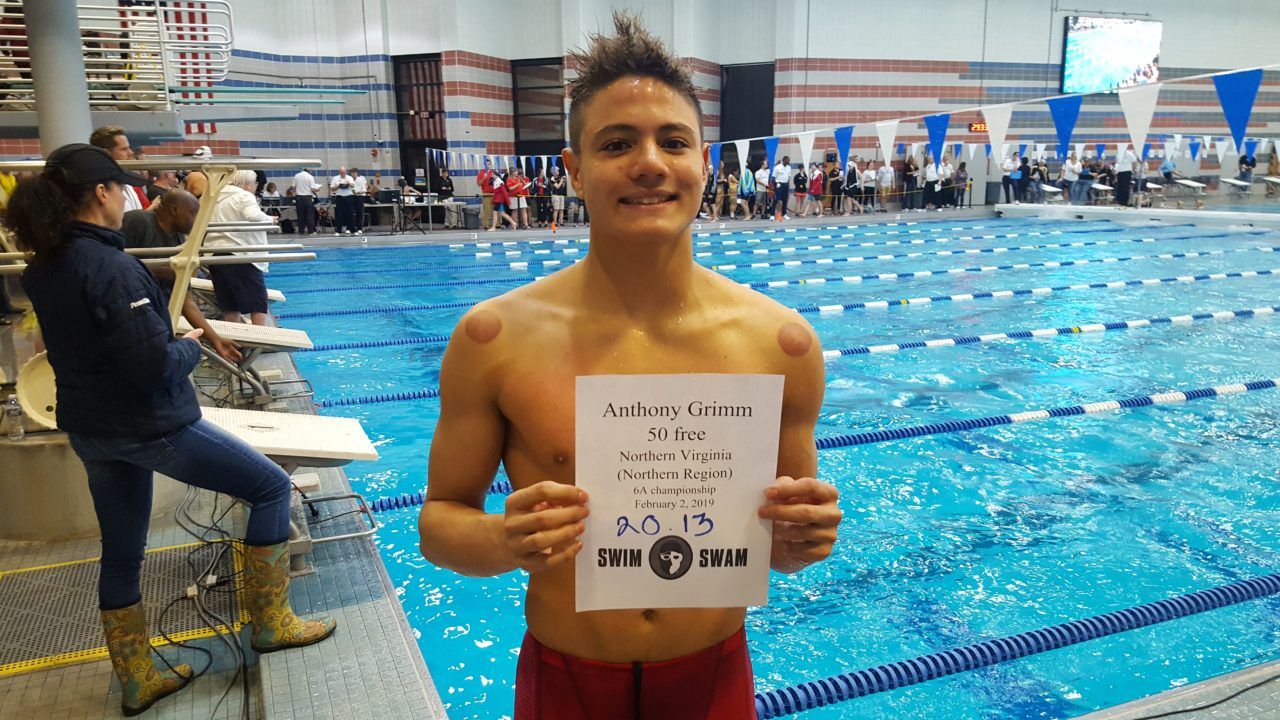 Oakton high school sophomore Anthony Grimm has been putting up some impressive times the last couple of weekends, but tonight was the icing on the cake, as he leadoff Oakton’s 200 medley relay at the Virginia Class 6 state championships with an eye-popping 20.87.

In terms of context, only Cal’s Daniel Carr (20.85) and Utah’s Paul Ungar (20.64) were faster at last year’s NCAA Division I championships. Ryan Murphy, who has the fastest 50 back ever at 20.20, didn’t crack 21 until he was already at Cal. Beyond that, it’s a little tough to put this swim in context, as it’s tough to find accurate lists as it’s rarely a standalone event beyond the age group years.

Stay tuned for a full recap of this meet, and the rest of the Virginia high school swimming championships.

Amazing time…one little note to all..he did this time without a backstroke “ledge”!! I think is time for UIL TO CONSIDER update it’s rule currently against the use of a ledge in backstroke to a “YEA” position. I bet that time would have been faster…food for thought 💭

I would be in favor of just allowing them to have their toes in the gutter, or allowing their feet to be “partially” above the water line. Then you dont have to buy wedges for every high school facility and still allows the same advantage almost as using a wedge. But again, it would have to say “partially” to avoid a standing start, and maybe also include language to say that their head or shoulders have to be below the deck of the block to avoid that weird standing start I have seen before.

Meanwhile in Oklahoma, Sophmore Aiden Hayes goes 21.3 in the lead spot for the 50back and it’s not even the fastest back split, nor fastest split for his age

For real this man cannot be allowed to be put in a pool with anyone. These kids have families.

let’s have a petition for these guys to co-host NCAA’s, I think we’d all love that.

Dear swimswam, can we make this happen?

He had an asthma attack