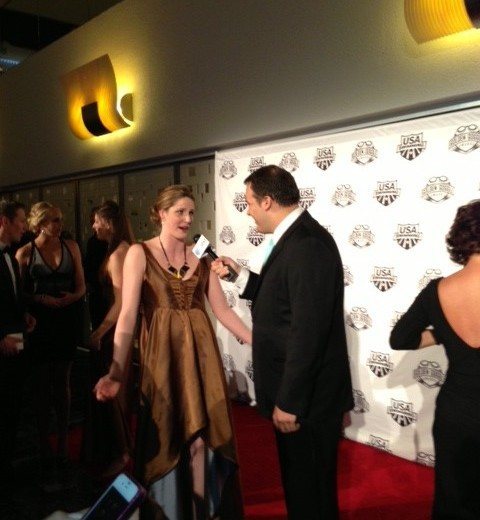 Female Performance of the Year: Katie Ledecky, women’s 800 free, Olympic gold and American Record – What does it say about Katie Ledecky’s 800 free and what Janet Evans’ American Record was to American swimming that she topped three World Record breakers to take this win. First, Ledecky won at Trials, then she took an even more improbable victory at the Olympics as she showed a motor that just wouldn’t quit running. She ended up in 8:14.63: a time that would break by more than a second the old record held by the legend, Janet Evans, from 1989.

You know a race has to be pretty impressive for it to break the Phelps/Lochte streak that has dominated this event for the past six years. And that it was. In a race that was literally won in the last touch, upsetting Australian favorite James Magnussen. Adrian’s 47.52 was good for gold, just one one-hundredth ahead of Magnussen’s 47.53.

She’s a distance swimmer, so maybe it shouldn’t come as much of a surprise that she closed strong Monday night. In accepting her award for Breakout Performer of the Year, Katie Ledecky was poised, confident, and at ease on stage–proving that she’s very much ready to handle the spotlight she’s earned. To put things in perspective, this is a girl who got her first trials cut in 2011 and was virtually unheard of outside of the swimming world until her 800 in London. And even in the swimming world, she wasn’t widely viewed as much more than an “up and comer” until strong perfomances in the leadup to Trials. But once she did break onto the national (and international) scene, she didn’t look back.

There were several well-deserving candidates of this award, but perhaps no one more so than Jessica Hardy. The first-time Olympian qualified in 2008 but was not allowed to compete after a drug test came back positive. An appeal and further investigation found that the failed test was the result of a contaminated supplement. In 2012, Olympic Trials started off with more disappointment: Hardy failed to qualify in the 100 breaststroke, the event she holds a world record in. But she kept at it, eventually qualifying for London in the individual 50 and both the 400 relays. She came away from the Summer Games with a gold, a bronze, and finally some closure after the tumultuous events of the past several years. “I’ve been through a lot,” Hardy said, in quite possibly the biggest understatement of the night.

Coach of the Year: Bob Bowman, Coach of Michael Phelps and Allison Schmitt

Coach Bob Bowman had two swimmers with very different personalities on the team this year. On the one hand, he’s got Phelps: a man of few words who often tries to avoid swarming fans and other kinds of spotlight that come with being, well, really fast (he didn’t come out on the red carpet before the ceremony started Monday night, for instance). And then there’s Allison Schmitt: bubbly, always smiling or laughing, and brimming with personality. Putting aside Bowman’s accomplishments on paper, the fact that he’s brought out the best in both of these athletes may well betray just how much he deserved this award. On Phelps, Bowman talked about how the obvious privilege of getting to be his coach was coupled with the fact that he gained a friend out of the relationship as well. Mentioning Schmitt as well, he said that she is the, “perfect example of what happens when you work hard and believe.” That mantra–the one all swimmers sacrifice so much for–is what Bowman seems to have put into practice.

The women’s 4 x 100 medley relay team of Missy Franklin, Rebecca Soni, Dana Vollmer, and Allison Schmitt was perhaps the most stacked we’ve seen in a while. These four alone comprised the nominees for female athlete of the year. To break it down: Missy Franklin, on the leadoff, was the individual gold medalist in the 100 and 200 back, breaking the American record in the former and the world record in the latter. Breaststroker Rebecca Soni took silver in the 100 and gold in the 200 breaststroke, also setting a world record in the 200. Dana Vollmer, the butterflyer, is the 2012 gold medalist and current World Record holder in the 100. And their anchor, Allison Schmitt, is the gold medalist and American Record holder in the 200 free. It takes more than add up times to put together a dream team relay, and on stage Monday night, these four girls showed they’ve got that extra piece–that can’t be coached, planned, or created. Franklin described it as “the most fun she’s ever had on a relay,” and if the way they were acting behind the podium Monday is any indication, she’s probably telling the truth.

It’s somewhat ironic that in the year that Ryan Lochte was allegedly pulling off the great Michael Phelps upset (which he did in many ways), Phelps took back the title that Lochte won for the past three years. The great Olympic Champion accepted his award graciously Monday night, talking about how his experiences in the past year have been some of the best ever and thanking teammates, coaches, and of course, his mother. “This Olympics was the best Olympics I’ve been a part of,” Phelps told the crowd, echoing the sentiment of several veteran national teamers on London. So maybe Phelps did get beat in a couple of events that he’s won in the past. But he still came away from London with four golds and two silvers, which still put him at the top of the medal standings. Oh, and another thing about those medals? They pushed him to a career total of 22, making him the most decorated Olympian of all time. Phelps deserved this award for his performance this year alone. But it was likely just as much about his storied career and what it’s done for the sport as it was about any specific accomplishments in his final year.

Few athletes have captured American’s attention in the way Missy Franklin has. In the sport of swimming, whenever we get someone that has the kind of personality that can draw the interest of–gasp!–non-swimmers, we’re grateful. And when those type of personalities come with the level of talent Franklin does, we can’t really believe our luck. The girl that is always smiling and seems loved by quite literally everyone–those who know her and those who don’t–came away from her first Olympics with five medals, four of them gold. In addition to her abovementioned backstroke (which included one American and one World record) and 400 medley relay medals, she also won gold in the 800 and bronze in the 400 freestyle relays. And finished in the top 8 in both the 100 and 200 individual freestyle events. We’ve known for a while that she’s versatile, but she proved this year that she’s capable of both managing the pressure of a meet like the Olympics, as well as excelling despite a grueling lineup. There’s a good chance she’ll go through a few more pairs of goggles before her career is over.

Yes! All people I wanted to see with awards have won except Anthony Ervin for the perseverance award. Just a question? What did the pathetic Donald Trump at this ceremony?

Donald is the Donald. Maybe he will give one of them a job. Can’t hurt to have the interest of a tv & property tycoon.

Who would you prefer – Pimp With a Limp?

The american team was one the best of all time this year. Congrats to the swimmers and the coaches. You represent very well swimming.

Great bunch of owesome talent !! Too bad Ervin didn’t win a perseverence award …..they all looked great . Yes Trump has nothing to do with swimming ! I totally agree with that .

I thought Katie Ledecky’s acceptance speeches were class act. She too will be a great spokesman for USA Swimming in future years.

P.S. Maybe she can give “the Donald” some lessons in humility…
I also thought that Mayor Bloomberg did a great job in his presentation with Dara Torres!