Get Ready For ISL Match 3: Debut of Tokyo Frog Kings and Toronto Titans 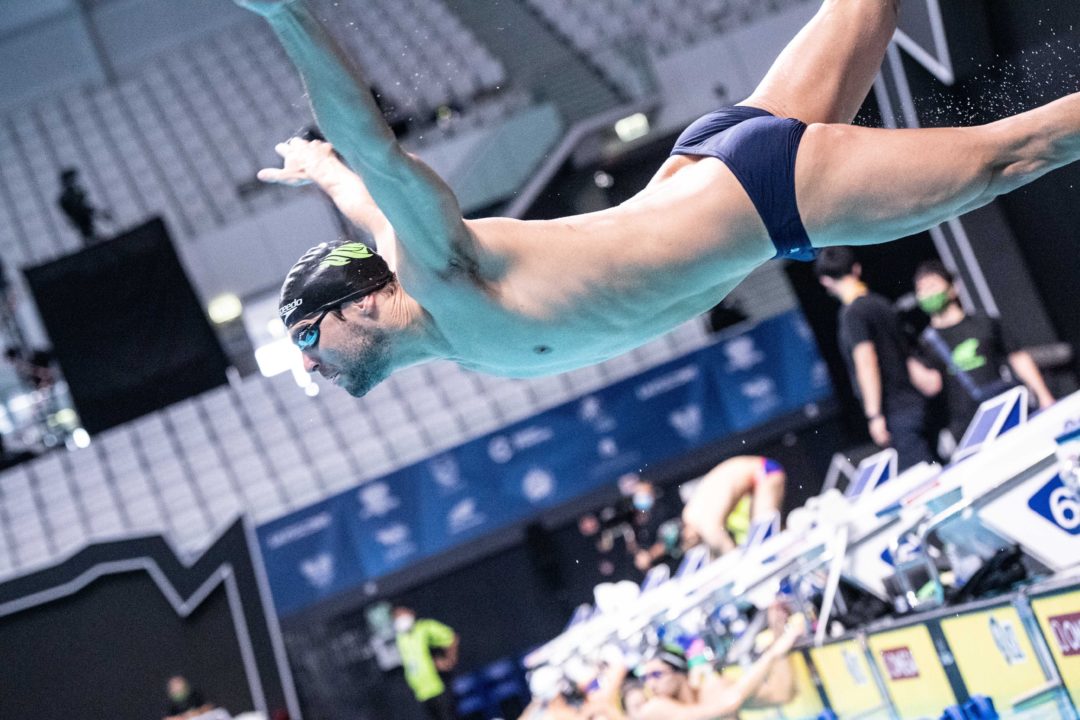 The Frog Kings' IM and sprint stars, including Morozov and Brad Tandy (above), and the Titans' back and free legends will finally hit the water on Saturday. Current photo via Mike Lewis/Ola Vista Photography

The 2 brand new ISL teams, Tokyo Frog Kings and the Toronto Titans, will hit the water for the first time on Saturday. They will be going head-to-head with 2 teams who have already gotten their feet wet in Budapest, LA Current and the Aqua Centurions.

Despite the Frog Kings’ loss of last year’s 200 fly, 200IM,  and 400IM Las Vegas finale champion Daiya Seto, they are still part of the top contenders in the IM events now that Tomoru Honda, who has the 6th fastest all-time 400IM time in Japan, has replaced Seto.

Kosuke Hagino also looks to score major points for the Frog Kings in the IM events, as he placed 2nd behind Chase Kalisz in the 400IM at the 2018 Pan Pacific Games ahead of Seto. At the same meet, he claimed bronze in the 200IM. Phillip Heintz (AQC) had a phenomenal ISL debut, winning the 200IM last weekend by nearly 1 second (1:52.78). We might see them race Jacob Heidtmann (LAC) who snagged second place in the 400IM during match 1 (4:05.28).

The Frog Kings even have the 100IM covered with Vladimir Morozov, the world-record holder in the event.

Yui Ohashi (TOK) is one of the top contenders in the women’s IM races. At last year’s World Championships she earned bronze in the 400IM. With no LA Current or Aqua Centurion women among the top 400 IM finishers during ISL week 1, Ohashi may be set up for a significant win, garnering some jackpot points for the Frog Kings.

The Toronto Titans are likely to start off strong in the fly events with Swedish Olympian and recent University of Southern California grad Louise Hansson. At the PAC-12 Championships in 2019 she won both the 100 and 200 fly, setting the NCAA record in the 100.

Suzuka Hasegawa (TOK) seems to be Hansson’s biggest competition in the 200 fly. Her lifetime best 200SCM fly, 2:02.96, would have made her last season’s ISL champion by more than 2 seconds. No one has swam faster than Hali Flickinger’s (CAC) 2:05.15 200 fly this season.

The Titan’s also have stellar mid-distance free men Aleksandr Krasnykh and Blake Pieroni looking to score major points in the 200 and 400 free. They will be racing Mykhaylo Romanchuk (AQC) who placed 2nd last weekend in the 400 free.

2. Sprint Freestyle: Who Will Decide the Skins?

Morozov is one of the Tokyo Frog King’s star sprinters. He is sure to have a huge impact on the men’s 50’s and 100’s of all strokes. His teammate Bradley Tandy is also ranked highly in the men’s 50 free.

One possible weakness here for the Frog Kings is the difficult event lineup for Morozov, as he has reportedly only been training for the past month due to the pandemic. Day 2, depending on which strokes he competes in, could be a challenge at least with the 100 free, 100IM, and the skins race.

Beryl Gastaldello already scored major points for LA Current in match 1 by snagging 2nd in the 50 free and 3rd in the 100 free. Abbey Weitzeil (LAC) scored a solid amount of points with a 5th place finish in the 50 free and 100IM, while foregoing the 100 free. The team’s  4 x 100 free relay of Weitzeil, Gastellado, Katie McLaughlin, and Andi Murez snagged 2nd place behind Energy Standard. Gastellado’s leg (51.54) was the fastest on the relay by .46 seconds. As they go up against such stroke-specialized teams, they may have this race in the bag. In match 2, the Aqua Centurions took 4th place, about 4 seconds slower than LA Current’s time (3:29.66).

3. Who Will Challenge the Event Champions From Week 1?

Gastellado (LAC) had an ISL record-setting win in the 50 fly (24.75) during match 1. Her ISL record has since been broken by Iron’s Ranomi Kromowidjojo (24.74), but it was still an incredible swim. Gastellado seemed pretty untouchable in the event by the other teams, will she have challengers in match 3?

Aqua Centurion’s had a victory in the 400 free when Valentine Dumont touched the wall at 4:00.37. On Saturday, we may get to see Dumont face-off with Leah Smith (TOK) in the 400 free. Smith’s performance in the 400 free at last year’s World Championships ranked her 3rd in the world last season behind Australia’s Ariarne Titmus and world-record-holder Katie Ledecky.

The backstrokers are a vital source of potential points for the Toronto Titans in the ISL. Kylie Masse and Lisa Bratton are among the top contenders in the women’s backstroke events this weekend. Masse won the 100 back at the 2019 World Championships and may defend her title this weekend. There, she also won bronze in the 200 back. Bratton specializes more in the 200 back, the event she made U.S. Olympic Trials in 2012 at age 16. At the 2019 World University Games, Bratton took 1st in the 200 back.

LA Current’s Ryan Murphy placed 2nd in 200 back and won the 100 back In ISL Match 1, finishing the match with an impressive 58 jackpot point win in the 50 back skins race. Murphy might find some slightly tighter races with Toronto Titans Shane Ryan and Cole Pratt.

The Tokyo Frog Kings and Aqua Centurions may have great head-to-head races in the women’s breastroke events. Sprint breastrokers Martina Carraro and Arianna Castiglioni placed 1st and 2nd respectively in the 100 breaststroke, gaining points for the Centurions in match 2. Carraro also placed 3rd in the 50 breast and 4th in the 200. They will likely compete against Miho Teramura (TOK) who took silver in the 100 breaststroke at the 2019 World Cup.

In week 1 of the ISL we saw 2 matches. In the 1st match, NY Breakers appeared to lose significantly to the Cali Condors due to impressive, mega jackpot point-winning swims. Match 2, won by London Roar, also appeared to be an equally fast match. If we rank teams overall by their points scores in their respective matches, London Roar is 1st and NY Breakers sits at last place in 8th.

However, if we switch the day 1 performances of London Roar to match 1 and those of the NY Breakers to match 2, the NY Breakers would have actually placed 3rd overall out of all 8 teams and Roar would have placed 7th. This reminds viewers to keep thinking about the results in the context that there are 10 teams, and some matches may have stronger fields than others.

Jackpot points will continue to have great effects on match 3, as teams will “jackpot” or steal points if they win a race by a large margin, if other swimmers do not meet the cut-off time, or if another team has a DQ, DNS, or DNF race.

-Do the new teams have smart strategy? Will they implement strategies like resting swimmers for certain events or putting them in an “off-event” that they could be good at, based off of recent training? Will they make sure not to overuse their star swimmers like Morozov? So far, this has been important and has contributed to some event wins.
-Adding to #3, Kawamato swam a faster 100 fly than anyone in the league so far at the Japanese SC championships. Can he hold his momentum and top the 100 fly?
-How many ISL records will be broken by the new swimmers? Ohashi, Morozov and a few more look like contenders. Masse looks like a backstroke star, but the… Read more »

Is world record happening? Morozov vs Hayden vs Fratus?

Japanese college swimmers can swim in this league without violating their collegiate sport rules. Nice.

CBS all access is $5.99/month. I don’t love it but that’s not bad since we’ll only need one month to watch all of ISL 2020. I don’t understand complaining that it isn’t free; since when do companies give away their product for free?

All of which generate significantly more ad revenue.

It’s on free to air in Australia complete with replay on demand for a year afterwards.

It looks like it is on CBS access here in the States. So not only is it on at 6am eastern, many have to pay for it! My guess is USA ratings will go down….if that is possible?

I just signed up for a free trial to watch it… and I can’t actually find it anywhere on the site, so I don’t even know how to. Anybody got a hint?

In the past, it just pops up close to meet time.

that’s terrible if you have to pay for it. Should have stuck with ESPN. At least it would have been free on ESPN3 and not cost on ESPN+

Didn’t meet the cut for obscure enough for The Ocho..