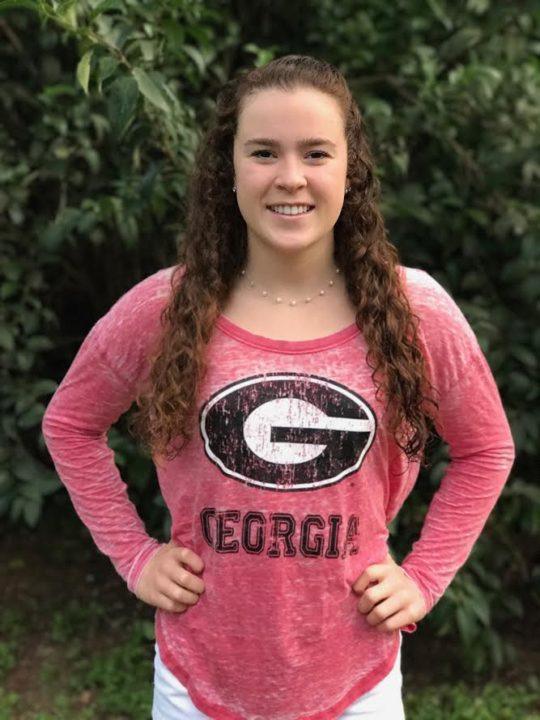 Texas-based Dakota Luther, SwimSwam's #11 recruit in the class of 2018, has announced her verbal commitment to swim for the Georgia Bulldogs. Current photo via Dakota Luther

Texas-based Dakota Luther, SwimSwam’s #11 recruit in the class of 2018, has announced her verbal commitment to swim for the Georgia Bulldogs. Luther is a high-caliber fly/freestyler for Austin Swim Club, and will head to UGA after graduating from Westlake High School next spring. Luther is the 2nd swimmer among the top 20 recruits to commit to Georgia thus far, as she’ll be joining fellow butterfly standout Olivia Carter.

“I chose the University of Georgia because I believe that the environment throughout campus will allow me to succeed in the pool and in the classroom. The coaches genuinely care about each person, not only as athletes, but as people as well. I quickly fell in love with the supportive atmosphere of the team and how close they all are. The campus is absolutely beautiful with many exciting things to do and see. I look forward to working towards studying to be a Physician’s Assistant through UGA Academics.”

Luther has won several titles at the Texas 6A State Championships, including golds in the 200 free and 100 fly from the 2017 meet. In 2016, she won gold in the 200 free and 500 free. She also has a long list of achievements at the junior national level, having won both butterflies at last summers Speedo Junior Nationals.

UGA should immediately benefit from having Luther on their squad at SECs and NCAAs. Her times are fast enough to have made the championship final in both butterflies and the 200 free, as well as the B final in the 500 free, at the 2017 SEC Championships. She’s also fast enough to have scored in the 200 fly at the 2017 NCAA meet, and is just over a tenth shy of what it took to score in the 100 fly.

So happy for Dakota. All her hard work and success is paying off. UGA gets a big win here. Dakota is an exceptional competitor, teammate, and person.

Way to go Dakota! Having had the privalage of Dakota attending a few of our masters workouts now and then and drill us old folks …. I can say Dakota is not only a great swimmer but she is a first class person and always fun to have her in our “old folks” practices. Dakota comes from great swimming stock as mom Whitney a 2 time Olympian and gold/silver medalist, but more than that … Whitney is a great mom, great role model and a incredible person to be around! Those traits have certainly rubbed off on Dakota! Congrats Dakota! Go Dawgs!

YEAH Dakota!! So happy for you!! You have many great swims in front of you! Wishing you MUCH success!!

Still a great addition for UGA tho

They could use a good 200 freestyle though. And Luther also has the second fastest 100 fly in the class. Georgia’s problem is that they need a lot of things, sprinters, a breaststroker, and a backstroker. It’s hard to fill all these needs in one recruiting class, even if it’s as deep as this one.

Ruby Martin is uncommitted at this time.

What a classy girl. She has handled the pressure of being an Olympian’s(Whitney Hedgepeth) daughter so well. I think she has a lot of amazing swims awaiting her.
Go Dakota!!

Big help on their 800 freestyle relay. They’ll need it with Raab graduating.

they graduate a lot in recent years so they will need help in many events….

What a classy girl. She has done such a good job not letting the pressures of being an Olympian’s daughter(Whitney Hedgepeth) get to her. I think she has a promising future and lots of fast swimming lying ahead for her.