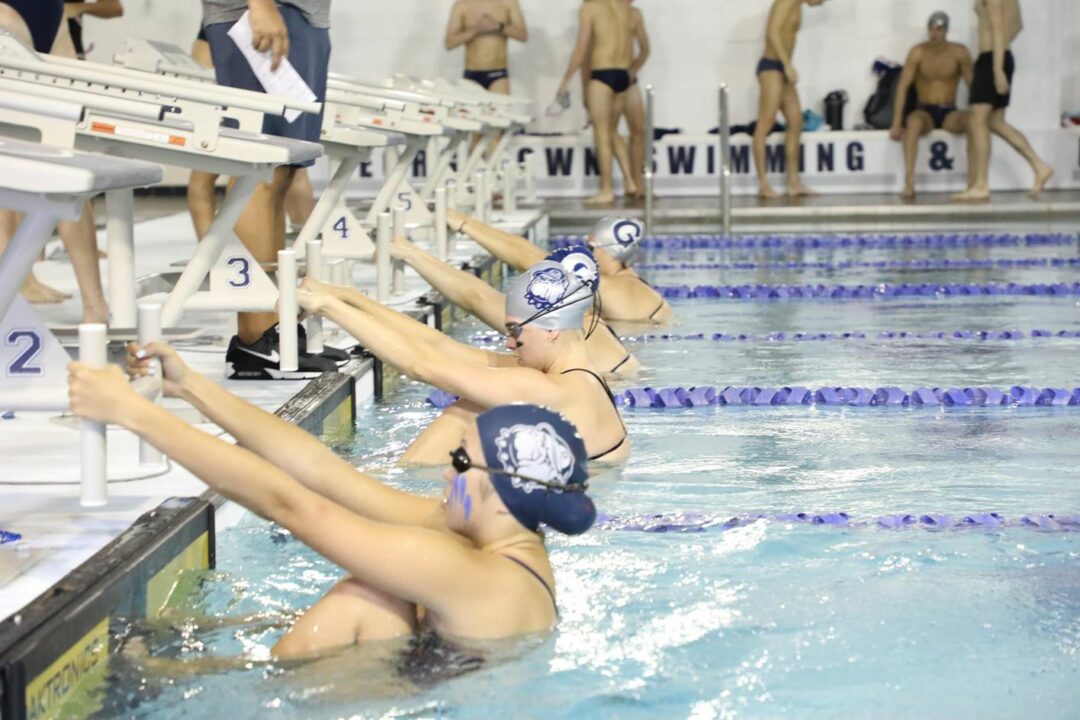 The Georgetown men won six of their nine events to defeat Howard, American and George Mason, while the George Mason women edged out Georgetown by four points. Current photo via Georgetown Athletics

WASHINGTON – Back in action for the first time since the 2020 BIG EAST Championships, Georgetown University’s men’s and women’s swimming & diving team impressed at the Potomac Relays on Friday. The men’s squad won six of their nine events to defeat Howard, American and George Mason while the women’s squad won three events outright and was narrowly edged by George Mason.

“I’m really happy with the results overall,” Head Coach Jack Leavitt said. “A few really stand out for this part of the season, but there’s still a long way to go. The most important thing was just getting in some racing. It’s been a long time and it just felt good to compete with the G on our caps as a team again.”

On Deck
The Hoyas head down to Charlottesville for an exhibition against the University of Virginia, the defending NCAA women’s swimming & diving national champions, over the mid-semester holiday break next weekend.

WASHINGTON, D.C. – The George Mason men’s and women’s swimming and diving teams opened the 2021-22 season on Friday at the Potomac Relay Invitational, hosted by American University.

On the women’ side, the team of senior Jacquee Clabeaux, junior Megan Mastropaolo, and freshmen Emma DeJong and Ali Tyler won the 800-yard freestyle relay (7:59.84).

Seniors Ana Kuzemka and Sophie McKinley, along with DeJong took the top spot in the 3X100 breaststroke relay (2:54.99).

On the men’s side, juniors Thomas Chapman and Sammy Lucht, sophomore Anthony Nguyen, and freshman Justin Lee combined to finish first in the 400-yard medley relay (3:34.73).

In the 200-yard medley relay, the team of senior Will Rastatter, juniors Josh Fletcher and Sammy Lucht, and sophomore Sorab Aman placed third (1:36.33).

The Patriots are back in the pool when they travel to Delaware on Saturday, Oct. 9 in Newark, Del.

WASHINGTON – After a year hiatus, the Potomac Relays returned to Frailey Pool in the Reeves Aquatic Center, hosted by American University swimming & diving. The Eagles took third on both the men’s and women’s sides, while the George Mason women took first place alongside the Georgetown men.

Beckles, Simon and Solomon also competed together in the 300 Fly Relay, winning the event with a 2:31.69 mark.

On the women’s side, divers Teyana Johnson (San Antonio, Texas) and Jordynn Connell (Flower Mound, Texas) placed second and third, respectively, in the 1-meter dive. Johnson recorded a 184.60 while Connell registered a 184.55 score.

On Oct. 16, the Bison host Georgetown in their home opener. Meet starts at 1 p.m. inside Burr Pool.