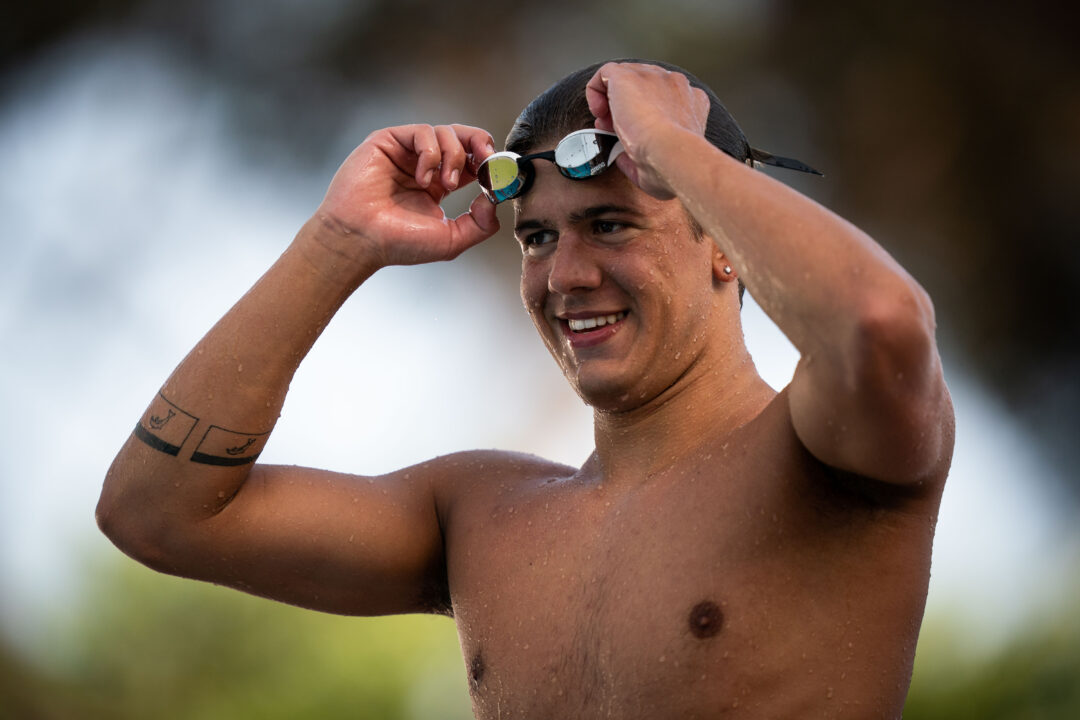 Noe Ponti has decided to return home to train in Switzerland after a month at North Carolina State University in the United States. Archive photo via Mine Kasapoglu

Swiss swimmer Noe Ponti, the Tokyo 2020 Olympic bronze medalist in the 100 fly, has decided to leave North Carolina State University after a month and return to his training base in Switzerland.

In a post on his Instagram account on Sunday, Ponti explained his decision. While he said that he arrived in the United States riding the high of his Olympic success, he began to experience mental fatigue.

He says that mental fatigue has created “several problems in the management of daily life,” and that after speaking with his team in Switzerland, his family, and the NC State coaching staff, he decided he needed to return home.

He will now resume training in Ticino in southern Switzerland with his coaches Massimo Meloni and Andrea Mercuri.

In spite of his early departure, at least one of Ponti’s NC State teammates posted a message of support – fellow freshman Sam Hoover shared Ponti’s post on Instagram with the message “Love you always bro” and “see you down the road.” Another freshman, Arsenio Bustos, echoed that comment in his own post.

The 20-year old Ponti is a better sprint butterflier internationally, though his 1:55.05 in the 200 long course fly indicates that he would have been a substantial contributor in that event this season for the Wolfpack.

Without Ponti, the Wolfpack will still have another freshman Aiden Hayes as the front-runner to absorb the butterfly legs of their medley relays. He was already 45.47 in high school. Arsenio Bustos (46.51), the incumbent on the 400 medley relay Noah Henderson (45.83), and the 200 medley incumbent Luke Sobolewski (46.07) leave the Wolfpack with a still-deep butterfly group, but with Ponti they were the best in the nation even as a young group.

While Ponti was drafted by the Tokyo Frog Kings in the International Swimming League draft, he isn’t eligible to join the team because he was not in the draft pool. The Frog Kings’ draft choice was in error, and ultimately resulted in a forfeited pick.

On Sunday, Ponti wasn’t ready to commit on whether he might find his way back to the NCAA, but said he was keeping his options open.

“Right now my number one priority is to understand and process everything that has happened to me in these last months. From there I will decide what to do with my life and my swimming career.”

With ROCKtober just around the corner this was probably a good move. God speed Noe!

Hope he didn’t get a Wolfpack tattoo.

He was definitely in the ISL draft pool. Article is incorrect.

@SamB I think that was his main point. He needs to figure out what he wants and the best way to do that is in a good headspace and not 4000 miles away from home in a country he’d never been to in an environment where everything was different.

I heard he was going to Indiana after he takes a break.

I think SwimSwam staff knows who he is, as a comment one of the writers once had on him implied he is someone associated with the IU swim team. I wouldn’t be surprised if he is one of the assistant coaches.

Who would be the funniest possible person?

I’ve got my money on monsieur Miller

If he goes to IU he will transfer after one year

Noe, take care of your mentals and your chicken. NCSU will be there when you’re ready. Go Pack! 🐺

Who downvoted the Beast Mode? No better words were ever said at NFL media obligations: https://www.youtube.com/watch?v=eGrTAF-KIc0 .

Not the best fly group in nation