Petrides and Howell are both freestylers with times that are already fast enough to score at the Pac-12 Championships. Stock photo via Anne Lepesant

Washington State will have 2 more members joining their freshman class next fall, as Maia Petrides and Samantha Howell have made their verbal commitments to the Cougars. Petrides, a native of Hawaii, and Howell, a native of Texas, are both middle distance and distance freestylers. They should have an immediate impact at the Pac-12 Championship meet, as both have times that are fast enough to place in the top 24in at least one of their races.

Having Petrides and Howell on the roster will help the Cougars make up for the graduation loss of Kendra Griffin, Jessica Marston, Elise Locke, and Emma Elhoff, who all swam distance free at Pac-12s last season. Griffin was a 3-time scorer at that meet, placing 8th in the 1650 free, 21st in the 200 fly, and 21st in the 500 free.

Rachel Thompson, who scored with a 19th place finish in the mile at Pac-12s, will still be at Washington State when Petrides and Howell arrive on campus. 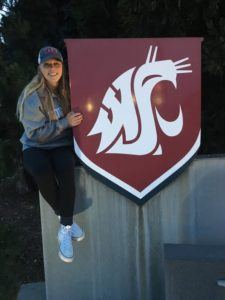 Howell recently moved from her training base with the Pleasanton Seahawks to Austin, Texas, where she now trains with the Austin Swim Club. She’ll be making the move to Washington State after graduating from Lake Travis High School at the end of this year.

Howell competed at the California CIF North Coast Section Championships last season, swimming her way into the top 20 of the 200 and 500 freestyles.

During the long course season, she qualified for the 2016 Speedo Junior Nationals, where she competed in the 200 meter freestyle. She also swam in the Futures Championships meet in Austin, where she placed in the top 16 of the 200 and 400 free. 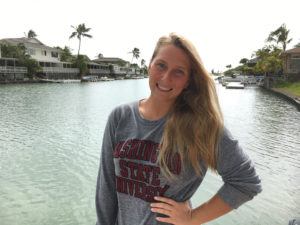 Petrides currently resides in Hawaii, where she attends the Mid Pacific Institute and swims club with the Kamehameha Swim Club. Her best events range from the 100 free to the mile.

Last season, Petrides was a 2-time championship finalist at the Hawaii State Championships. There, she placed 4th in the 500 free and 7th in the 200 free. She’s also competed in the 100 free at the state meet, placing 2nd in that event in 2015.

“Washington State immediately felt like home. I love the school, the team, and the coaches. I am incredibly grateful for this opportunity and am beyond excited for next year.”

I’m from Washington – how long have the Cougars had a swim program? Do they have a men’a program?

USMSRules – I don’t know exactly when it started, but it has been around for quite a while. There is not currently a men’s program, though there was at one point.

Congratulations Maia! Another great swimmer coming out of Kamehameha Swim Club and the Flanagan brothers!