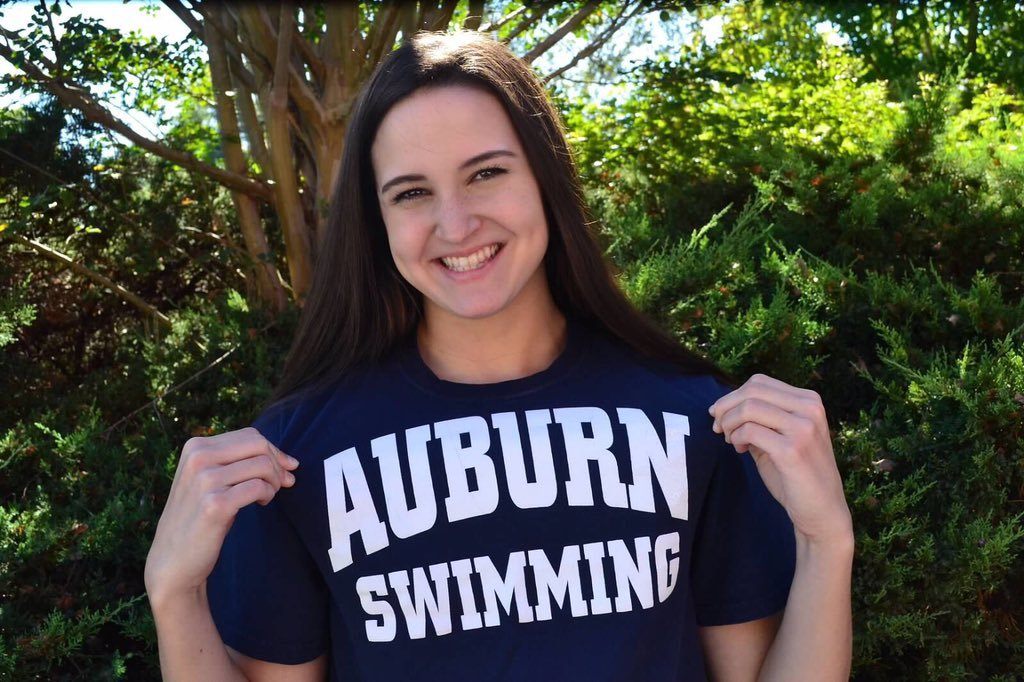 For the second time today, a native Georgian swimmer has opted for an SEC team across state lines. Dynamo’s Michael Taylor verbally committed to the Florida Gators earlier today, and now Swim Atlanta’s Jane Johnson has given her verbal to the Auburn Tigers. Jane made her announcement via Instagram:

I am so excited to announce that I have verbally committed to swim for Auburn University!! #WAR EAGLE ???????????????? pic.twitter.com/TGIPB6vnAj

Full Disclosure: I first coached Jane (or as we called her, “Champ”) on our summer league swim team when she was 9 years old. Therefore, while I realize my job is to be objective, this particular article may at times sound like an opinion piece. As the whippersnappers like to say, “Sorry I’m not sorry.”

Jane is the youngest of three swimming sisters. They are all tall and lean (referring to themselves as “trees”), but Jane is tallest at 6’1″. She is also the most competitive, which is not uncommon for youngest children trying to keep up. As a 10-year-old, she chose to practice with the 15-18 years old, and held her own.

Jane’s oldest sister, Ellen, finished her eligibility at South Carolina last season. Ellen is currently ranked as the Gamecocks’ 5th all-time fastest performer in the 100 yard breast (1:02.63). Her middle sister, Olivia, is a freshman at Syracuse who chose not to swim collegiately—despite having four 6A state championship rings and swimming 57.00 in the 100 yard butterfly.

Jane is a senior at Lambert High School and swims under Coach Kerry Langley. Coach Langley, who swam at Alabama, has coached Jane, both her sisters, and current UGA swimmers Ashley Mallon and Katherine Aikins from summer league through high school. Lambert is vying for its 5th straight 6A title this year, and Jane will be an integral part of the team’s success.

At the club level, Jane swims for Swim Atlanta under Coach Jeff Hike. Coach Hike is an Auburn Swimming alumnus, who obviously had a bigger influence over Jane than I did (let the record show I tried to wear UGA apparel in her presence whenever possible).

As a swimmer who can swim three out of the four strokes, Jane has a lot of upside. Putting the intangibles aside, and I can tell you she has them, her physique alone would pique the interest of a college coach. She is a six-foot-one-inch teenager who has yet to lift weights. Even though she’s mostly limbs now (no pun intended with the sisterly “tree” joke), Jane has three junior national cuts, and has added freestyle to her repertoire in the last few months. If she is allowed to mature and strength train properly, she could see big time drops this season and into her freshman year at Auburn.